The market for decentralized applications (dApps) is a future market in which many experts in the industry see great opportunities for growth. A new report from the analysis website dapp.com shows that the total transaction volume has continued to rise year-on-year to a total of more than USD 10 trillion. This corresponds to a growth rate of 58.5% and indicates great potential that this market holds for the coming years.

dApps in the financial and gambling sector show strongest growth

In 2019, 1,445 dApps have been released on the 6 largest Smart Contract platforms, Ethereum, EOS, TRON, Steem, IOST and NEO. In the transaction volume category, EOS dApps accounted for more than 50% of the total volume, almost USD 5 trillion. However, Ethereum still owns the majority of users, with over 1.4 million active dApp users. 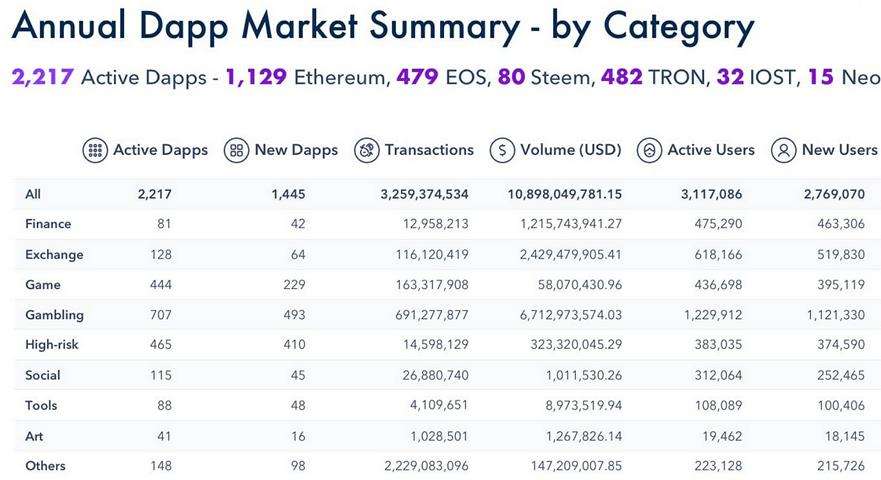 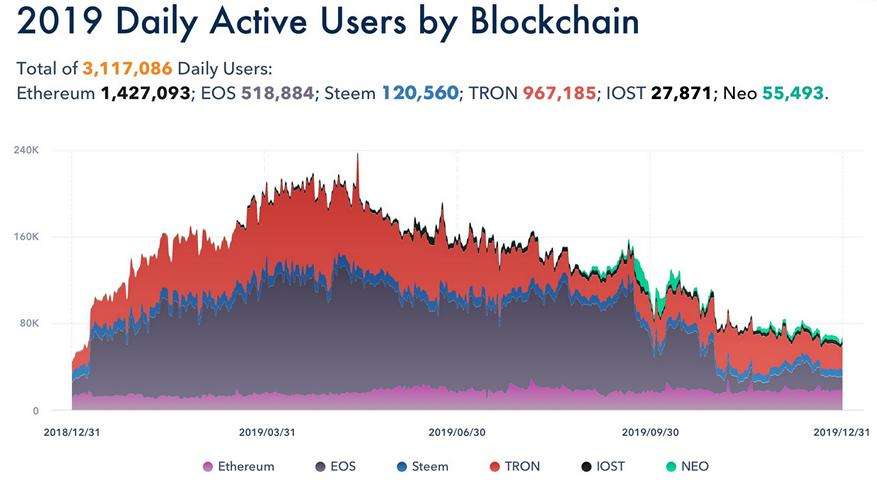 Almost half of the active Ethereum dApp users used dApps of the DeFi (decentralized financial economy) category in 2019. Almost 70% of the ETH transaction volume resulted from the use of decentralised exchanges and financial services.

In 2019, EIDOS had 14,6060 unique on-chain users (who also participated in EIDOS mining). This represents only 2.8% of the total active users of EOS. Nevertheless, they represented 85% of the total transaction volume of EOS in 2019. In the fourth quarter, activity in the EOS network decreased significantly. Most of the leading dApps based on EOS, such as EOSbet, Prospectors or Karma, announced their migration to the wax blockchain.

In 2019 TRON has become the second largest dApp ecosystem behind Ethereum with almost one million active users. As a previous report by DappReview shows, risky gambling dApps dominate the TRON ecosystem. More than 75% of all active users come from this category. Justin Sun achieved two major milestones by acquiring BitTorrent and the distributed streaming platform DLive. The report describes:

According to the data from SimilarWeb, DLive’s has monthly traffic of over 3 million. And we’ve recorded DLive’s 400,000+ on-chain users on the Lino blockchain within 3 months prior to the acquisition. We will be expecting to see more diversity of TRON’s dapp users in 2020.

The market for decentralized financial economics is large, but the majority of existing projects are still based on the Ethereum Blockchain. At the time of writing, USD 821.9 million, almost 4,800 ETH, were included in all Ethereum-based DeFi projects.

DeFi enables the exchange of digital assets as well as information without intermediaries such as stock exchanges or other centralized institutions. The community’s need for these services is correspondingly high, as they are in line with the vision of cryptocurrency, freedom and decentralization. Experts predict that the volume of this growth market could rise to over one trillion USD.