Steem (STEEM) is a crypto currency that should always be considered in connection with the Steemit platform. Steemit is a blogging and social networking website that looks and works similar to Reddit, but is based on the Steem blockchain. On Steemit, users can upload content from other users and reward them for creating high quality content. Steemit not only pays the content creators, but also the users who curate the content of the website. STEEM are therefore generated daily by the network and distributed to the people who update and curate content on Steemit.

While other crypto currencies use mining to create new units and pay out the new units exclusively to the miners, the new steem units created by the network are distributed to the people who upvote and curate Steemit content.

The current STEEM course can be viewed here. The courses of Bitcoin, Etheruem and other Altcoins can be viewed in our course overview.

As already mentioned, the crypto currency STEEM is the currency that can be freely traded on many popular crypto currency exchanges. In comparison to other crypto currencies it is important to keep an important fact in mind. STEEM has no maximum supply. Every day new steems are created (after a complicated calculation). The meaning behind this is that steem should not be a store of value, but a currency for everyday use (on Steemit). Because of this it makes no sense to hold Steem over a longer period of time as Steem are inflationary.

Regardless, Steem dollars are also the units that Steemite uses to reward users of the platform for posting and curating content. Fifty percent of the salary is paid in Steem Dollars. In addition, owners of Steem Dollar receive 10 percent interest for holding the currency.

The third currency within the Steemite ecosystem is Steem Power. As the name suggests, Steem Power stands for the vocal power within the platform. The more Steem Power a user has, the more his vote counts when curating the content and the higher the reward. In fact, a user can only vote if he does not have Steem Power.

In addition, Steem Power also has a say in Steem’s Delegated Proof-of-Stake.

As this article on steemite explains very well, about 48,000 STEEM are added to the reward pool daily, although the number may vary and is also dependent on the inflation rate.

The Steemit platform was a joint idea of BitShares founder Dan Larimer and Ned Scott. Like BitShares, Dan Larimer also left Steemit after a while and founded his current project, EOS.

The platform itself has grown significantly since the launch of the coin on 4 July 2016. In May 2018, Steemit announced that it had reached the milestone of one million users. According to its own information, the Steem-Blockchain produces more than one million transactions every day. A transaction can be anything that happens on steemite: Contributions, comments, votes and of course transactions. 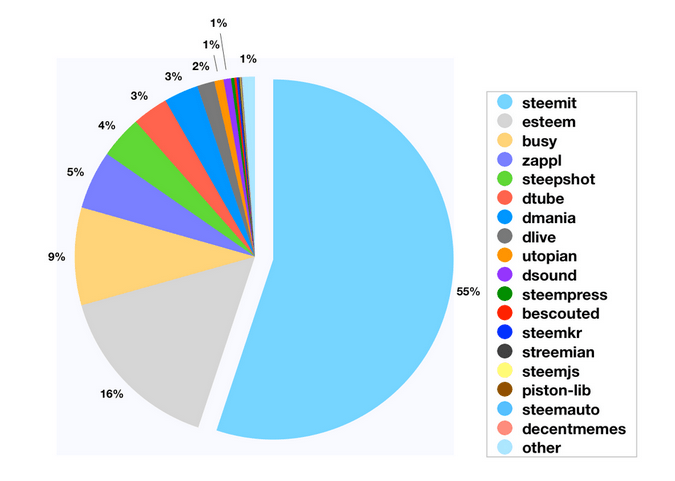 Steem is a blockchain platform that, like any other blockchain, requires an algorithm to reach consensus. Unlike Bitcoin, which uses proof-of-work and mining to achieve this consensus, Steem, typical of a Dan Larimer project, uses BitShares and EOS, the Delegated Proof-of-Stake (DPoS) invented by Larimer.

Steemit’s unique DPoS system requires 21 delegates (called witnesses as with BitShares) to be elected by democratic vote. The Steem Power holders can vote for witnesses who validate the transactions and create the blocks and write them into the blockchain according to their amount of SP.

The 19 witnesses with the most votes are delegated to produce one block each round (3 rounds of 21 witnesses each). The 20th witness is a backup stuff and the 21st witness is a miner that creates one block per turn. The backup witness can be any account that has received a vote as a witness (but not enough for the top 19). This account is randomly selected. The witnesses are expected to keep a block-producing Steem Node in operation around the clock. As a reward, they receive 1 STEEM for each block they produce. The payment in Steem Power also motivates witnesses to commit themselves over the long term.

Bottom line: Is Steem worth an investment?

Steem is one of a few crypto currency and blockchain projects which already has a real use case, namely the Steemit platform. Content creators and curators have the opportunity to earn money with their activities on the platform. However, when investing in Steem, it should be borne in mind that the crypto currency is inflationary and may not increase proportionally to the growth of Steemite. But for this there is Steem Power that grants a share to Steemit and its success.

The following video summarizes the Steem-Blockchain in only two minutes: