Zilliqa is not only an alternative currency to the Fiat money system like Bitcoin, but is also a platform for decentralized applications (dApps) and Smart Contracts, which can be created with a specially developed script language “Scilla”. Scilla has been specifically optimized to run parallel transactions to create high transaction rates.

An extremely important feature of Zilliqa is that the transaction throughput of Zilliqa increases (approximately) linearly with its network size. The technical basis for this is sharding, which Ethereum would also like to introduce in its own variant. However, Zilliqa will be the first blockchain platform to implement this technology, which originally comes from the field of classical databases and database partitioning. Through Sharding, Zilliqa will provide a completely new way of consensus building for blockchains.

It is important to know that the Mainnet (as of November 2018) has not yet gone live. Zilliqa put an internal test network into operation on 01 September 2017 and a public test network on 01 December 2017. The Mainnet of Zilliqua was officially launched on 31.01.2019 and since then all ZILs have been migrated to their own blockchain.

The current ZIL course can be viewed here. In our course overview you will find current charts for Bitcoin and other Altcoins (click here!).

The maximum total amount of ZIL is limited to 21 billion, with the block reward spread over 10 years and decreasing over time. About 80% of all ZIL are produced in the first 4 years, while the remaining 20% are gradually released in the following 6 years. If a node can successfully “mine” a transaction block, it will be rewarded with these.

How does Sharding work for Zilliqa?

Sharding in Zilliqa has three different forms: Network Sharding, Transaction Sharding and Computational Sharding. The most important form is Network Sharding, which forms the basis for the other two sharding mechanisms.

What is Zilliqa Network Sharding?

Network Sharding is a mechanism that ensures that data throughput in Zilliqa increases linearly with the size of the network. For this purpose, the entire Zilliqa network is divided into groups of nodes, each of which is referred to as a Shard. Each Shard reaches its own consensus. 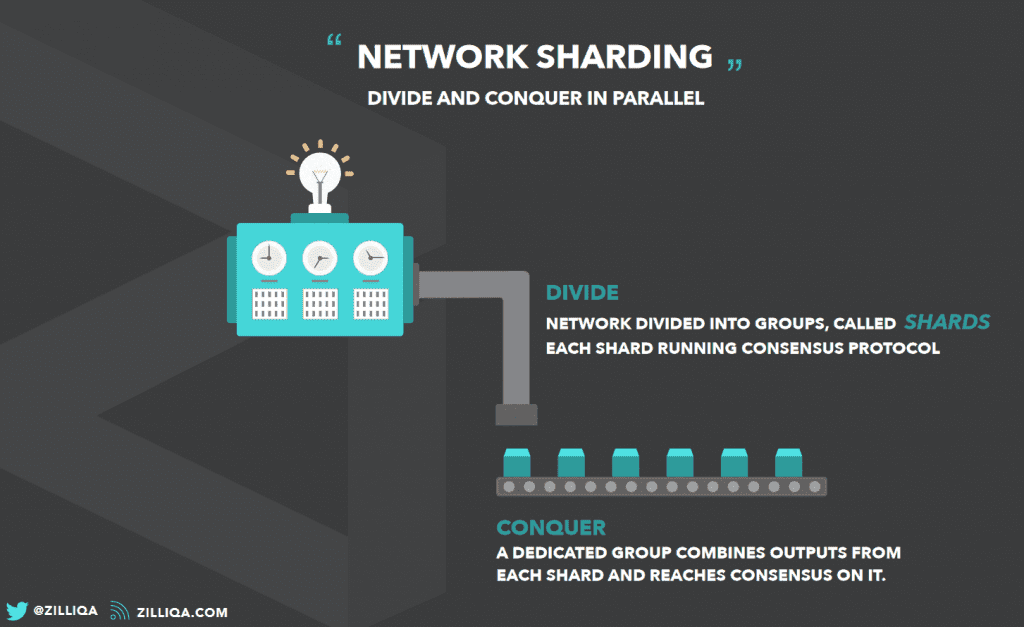 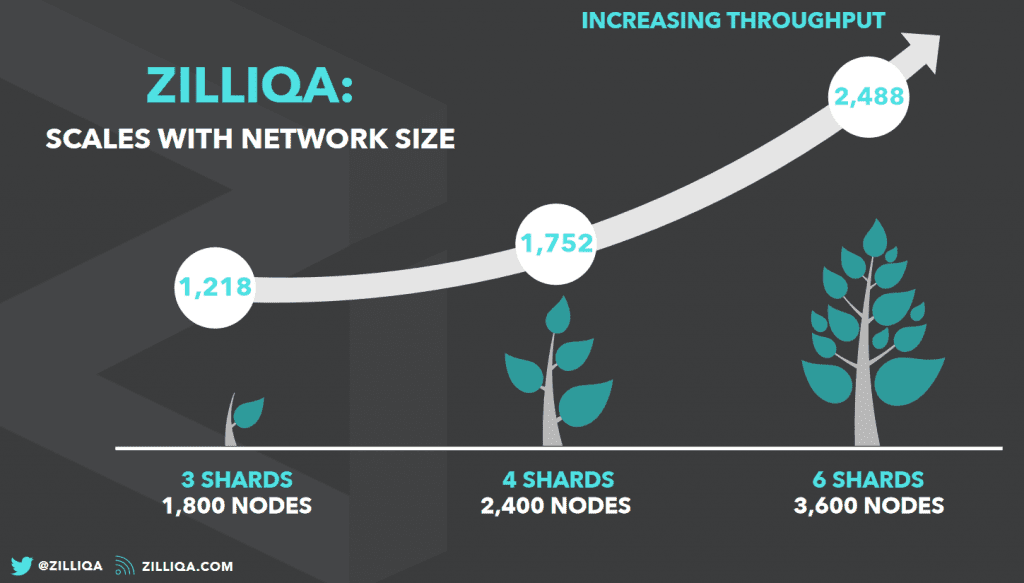 Although the basic idea is quite simple, the challenges associated with this technology are very large. The network must be protected from Sybil attacks to prevent malicious nodes from undermining the system. A mechanism is needed to assign the nodes to the shards. Furthermore, it must be clarified how many nodes comprise a Shard. The number must not be too small to prevent the takeover by attackers.

Zilliqa has found an answer to all three questions. To prevent Sybil attacks, Zilliqa uses a Proof-of-Work (PoW). Each new node that wants to join the Zilliqa network must first perform a PoW. Existing nodes in the network validate the PoW and authorize the node, which can then connect to the network. 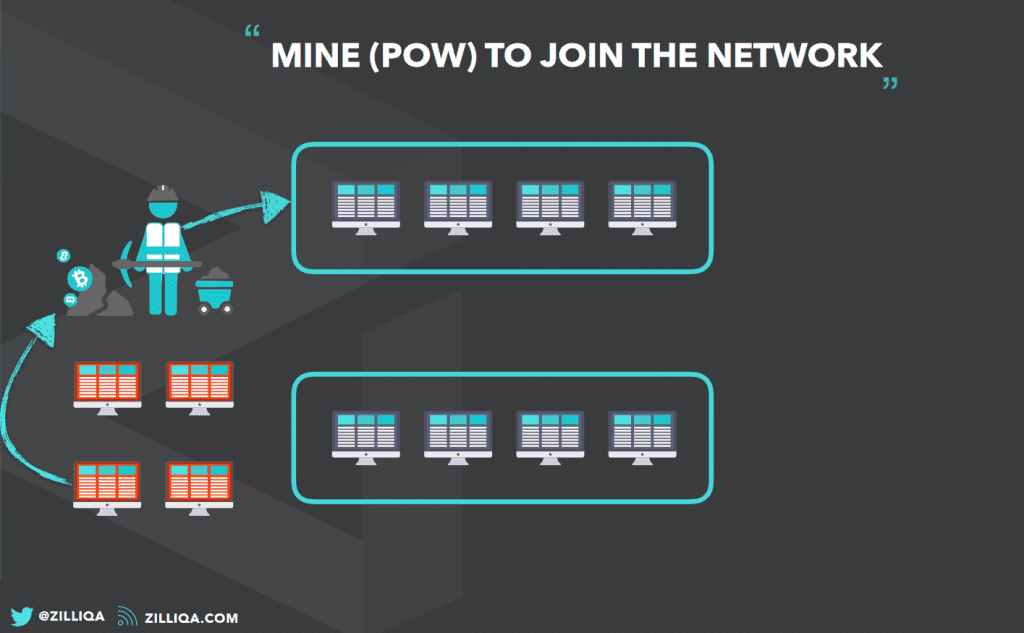 Shard management is regulated by the Directory Service Committee (DS Committee), which assigns nodes to specific shards. The DS Committee is elected. The election is based on the PoW. At regular intervals, also known as the DS Era, one of the members of the DS Committee is removed and a new member is added (using the first-in-first-out algorithm).

Zilliqa answered the question about the minimum number of nodes in a shard with 600 nodes. The takeover of a shard by malicious nodes is very small with this number. 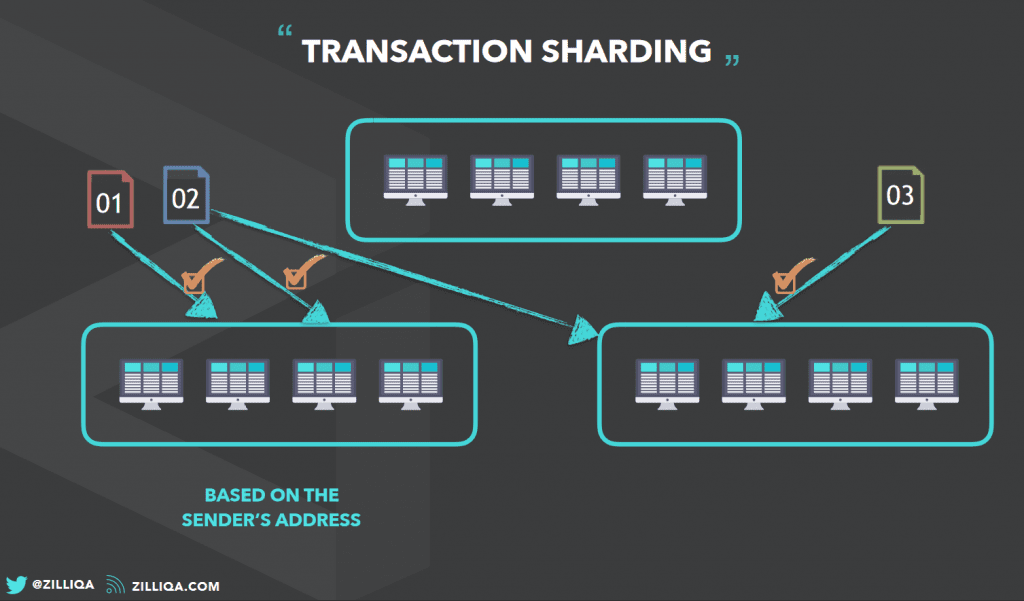 Computational Sharding is aimed at resource-intensive dApps. The technology enables calculations and smart contracts to be carried out very efficiently. Computational Sharding ensures that instructions or subprograms can be executed in parallel over different nodes in the network, in contrast to other dApp and Smart Contract platforms such as Ethereum, where instructions are always processed sequentially. This creates the foundation for resource-intensive dApps and Smart Contracts to run much faster and scale to many more transactions.

Zilliqa’s consensus algorithm consists of two core functions, Proof-of-Work (PoW) and Practical Byzantine Fault Tolerance (PBFT). However, Zilliqa only uses the proof-of-work to establish the identity of a node. In contrast to Bitcoin, the PoW is not used to reach a consensus in the network, but only to prevent Sybil attacks. The DS Committee, whose members change every epoch, is secured by the ASIC-resistant PoW.

In order to achieve consensus in the network, Zilliqa requires a special and efficient consensus protocol due to the comparatively small size of the shards (compared to tens of thousands of nodes in the Bitcoin or Ethereum network). Zilliqa uses the Practical Byzantine Fault Tolerance (PBFT) protocol within each shard.

With PBFT, all nodes within a shard have a sequence. Accordingly, there is a primary node (alias a leader) that is chosen randomly. The remaining nodes are called backup nodes.

A transaction within Zilliqa then works as follows: After several users have sent a transaction, they are forwarded to a specific shard. The shards, whose membership is regulated by the PoW, group the transactions into micro-blocks and validate the transactions. The leader of a Shard is responsible for collecting the signatures of other Shard members according to the EC Schnorr signature system. If this is successful, the shards pass the microblocks to the DS committee, which verifies the microblocks using a PBFT process. The microblocks are then aggregated and a complete block with transactions is transferred to the block chain. Once a block is approved by the Shards and the DS Committee, it is the only block that can refer to the preceding block.

The current roadmap initially only provides for planning until the end of 2018/ beginning of 2019. There are currently two points outstanding. The launch of the Mainnet and the release of the first dApps.

Bottom line: Is ZIL worth an investment?

Scalability of blockchains is one of the hottest in crypto space. Bitcoin and Ethereum, among others, are currently working on their own scaling solutions so that a mass adaptation of crypto currencies can take place. Zilliqa has made a promising start after its ICO and has attracted a lot of attention with its high number of transactions per second and mature sharding technology.

So Zilliqa is definitely a project to watch, especially when the Mainnet starts. In order to outperform the large competitor Ethereum, which is itself working on a sharding solution, Zilliqa still has to build up a broad acceptance in order to be competitive. In particular, Zilliqa should lure developers and companies away from Ethereum and make them switch to Zilliqa. Independent of this, Zilliqa is a very promising blockchain project.

For further information and details we recommend: https://zilliqa.com/resources.html