Nano is a cryptocurrency developed to solve two core problems of cryptocurrencies: long transaction times and high transaction costs. Nano solves both problems by using a novel block-lattice architecture where each user account has its own block-chain corresponding to the transaction/balance history of the account. 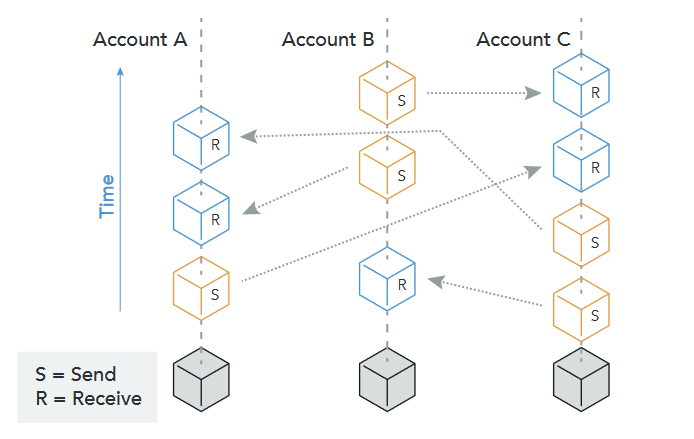 The block-lattice architecture does not require miners that combine a large number of transactions into a single block. Instead, the nano architecture only requires the sender and receiver to communicate and update their own blockchains to complete a transaction. This allows each account chain to be updated immediately and asynchronously to the rest of the block lattice structure.

As a result, nano-transactions take on average only a few seconds to complete. Ultimately, limiting the speed of transactions is primarily network-bound; transactions are processed as quickly as they can be spread throughout the nano-network. The only costs involved in a nano-transaction are the electricity costs consumed at the time of the transaction.

However, each sent or received nano transaction is also transmitted to the entire network, which is recorded in unpruned ledgers. If a malicious actor causes a conflict in a single account (i.e. two new blocks pointing to the same previous block in a block chain), the conflict is automatically resolved by the nano network by asking active nodes on the network which block they first saw.

Nano uses a delegated proof-of-stake (DPoS) as a consensus method, which we will look at in more detail later.

The founder of Nano is Colin LeMahieu. LeMahieu was an early Bitcoin supporter and has been working on the project since 2014. Originally the cryptocurrency was called RaiBlocks (XRB). In January 2018, however, the name was changed to make it less technical and easier for the masses to understand.

You can view the current Nano Course here (click link!). If you want to know what the courses of Bitcoin, Ethereum and other altcoins are like, you can have a look at our course overview.

What are the advantages of the block-lattice architecture?

Colin LeMahieu has developed NANO in an effort to solve the problems of the Bitcoin and to eliminate basic problems of other blockchains:

Love this visualization of $XRB transactions per second compared to some of the other top currencies pic.twitter.com/95Wo3RkjIc

Nano cannot be mined and has a maximum orbit of 133,248,290 NANO, all of which are already spent. When the currency was still known under RaiBlocks, the token symbol was XRB. Some stock exchanges still use this symbol, but the actual symbol for the Nano-Coin is NANO.

To secure the ledger, Nano uses a Delegated Proof-of-Stake (DPoS), where each account selects a wallet address of a representative node. This is a node that is always online and therefore always ready to confirm transactions. When an account selects its representative, the voting weight of that account increases by the balance of the original account. The votes are weighted according to account balances. Those who have more nano, including the (fictitious) account balances of the voters, thus have a higher voting weight. 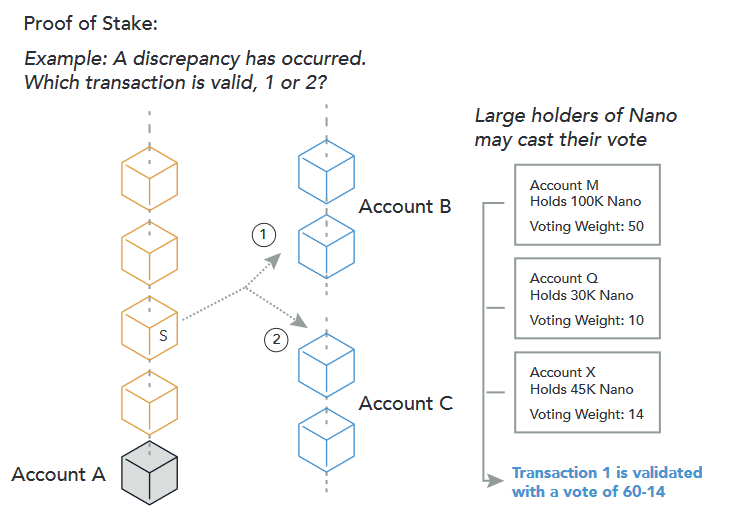 The development team justifies this process by saying that those who have more nano in the network have a greater incentive to keep the system honest in order to protect their own assets.

NANO experienced a meteoric rise in 2017, with the price of NANO (then XRB) rising from less than a dollar to nearly $36 in a month. This Bull-Run was however stopped by the BitGrail Hack unsightly. In February 2018 NANO worth 187 million US dollars (then still XRB) were stolen from the Italian crypto currency exchange BitGrail.

Unfortunately, BitGrail was one of the few and, above all, the largest raiblocks exchange at that time, which is why the hack had such a big impact. Investors lost faith in the crypto currency after BitGrail founder Francesco Firano blamed the NANO development team for security problems in the crypto currency and the hack. The Raiblocks development team doubted the integrity of the Exchange and Firano and blamed the hack on security flaws in the Exchange that had been known for some time and had not been fixed. The question of guilt was never really resolved conclusively.

This may have been one of the reasons why NANO could not really recover from the BitGrail hack, even after the rebranding, with the bear market certainly playing a role in 2018.

Bottom line: Is NANO worth investing?

Nano is a project that has undergone continuous further development since its introduction. With its technology, it could provide a working solution to the scalability and latency problems of existing crypto currency projects and eventually gain mainstream acceptance. Whether this will actually happen remains to be seen. It will be interesting to observe how the project will develop in the future and whether it can prevail against the large number of competitors.

[ratings]
Crypto News Flash does not endorse and is not responsible for or liable for any content, accuracy, quality, advertising, products, or other materials on this page. Readers should do their own research before taking any actions related to cryptocurrencies. Crypto News Flash is not responsible, directly or indirectly, for any damage or loss caused or alleged to be caused by or in connection with the use of or reliance on any content, goods, or services mentioned.

BitGrail Hack Block-Lattice Nano
Previous ArticleWhat is Zilliqa – Can it beat Ethereum?
Next Article What is Digibyte – Veteran & crypto currency for everyday life?