DigiByte (DGB) belongs to the veterans among the cryptocurrencies. The project was founded in 2014 and, like many crypto currencies from this period, aims to solve Bitcoin’s problems (slow transactions, high transaction costs).

DigiByte describes itself on its official website as follows:

DigiByte is a public, rapidly growing and highly decentralized blockchain. DigiBytes are digital assets that cannot be destroyed, counterfeited or hacked, making them ideal for protecting objects of value like currency, information, property or important digital data. DigiBytes can be sent over the DigiByte Blockchain and forever recorded on an immutable public ledger that is decentralized on thousands of computers across the planet.

This can be explained by the fact that DigiByte does not create a new block every 10 minutes as Bitcoin does, but about every 15 seconds. This combined with over four and a half years of existence ensures that DigiByte has the “longest” UTXO blockchain currently available. The short block times also allow DigiByte a throughput of around 560 transactions per second (TPS), which is a significant increase compared to Bitcoin’s 3-7 TPS. The DigiByte team aims to achieve 2,000 TPS by 2020. In the year 2035 it should even be up to 280,000 TPS.

To limit the blockchain’s memory requirements at least slightly, DigiByte was the first crypto currency (before Bitcoin) to implement Segregated Witness (SegWit) technology, keeping the ledger at least a bit more compact.

DigiByte (DGB) was officially launched on January 10, 2014 by the Genesis block of entrepreneur and programmer Jared Tate. The goal of DigiByte was to develop a faster and more secure crypto currency (as Bitcoin). However, the start of the project received little attention at the start. DigiByte caused the first major sensation with the DigiShield-Hard Fork in February 2014, which protects the DigiByte blockchain from the threat of multipools, which have dismantled large quantities of DigiByte at a low level of difficulty. This was achieved by adjusting the block difficulty between each block. DigiShield technology was then implemented in other 25 crypto currencies such as Dogecoin, ZCash, Mona and Bitcoin Gold.

In the following years the project was continuously developed, as the following graphic from the official DigiByte website shows. 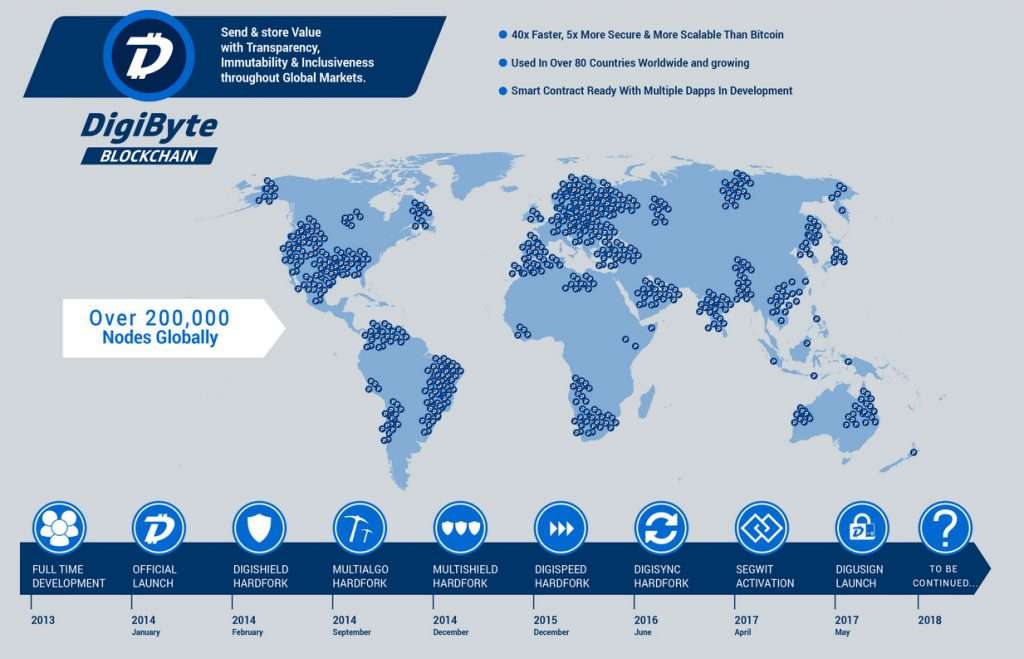 From 2014 to 2017, MultiAlgo, MultiShield and SegWit were implemented via Hard Fork, although the further development of DigiByte was financed solely by donations to the DigiByte Foundation. DigiByte has never conducted an ICO or other token sale and has never been controlled by a private company.

The DigiByte Coin (DGB) has a maximum supply of 21 billion DGB, which will be fully mined within 21 years, until 2035. Compared to Bitcoin, this is 1,000 times more coins. At the time of writing (November 2018), DGB 11 billion had already been minined. 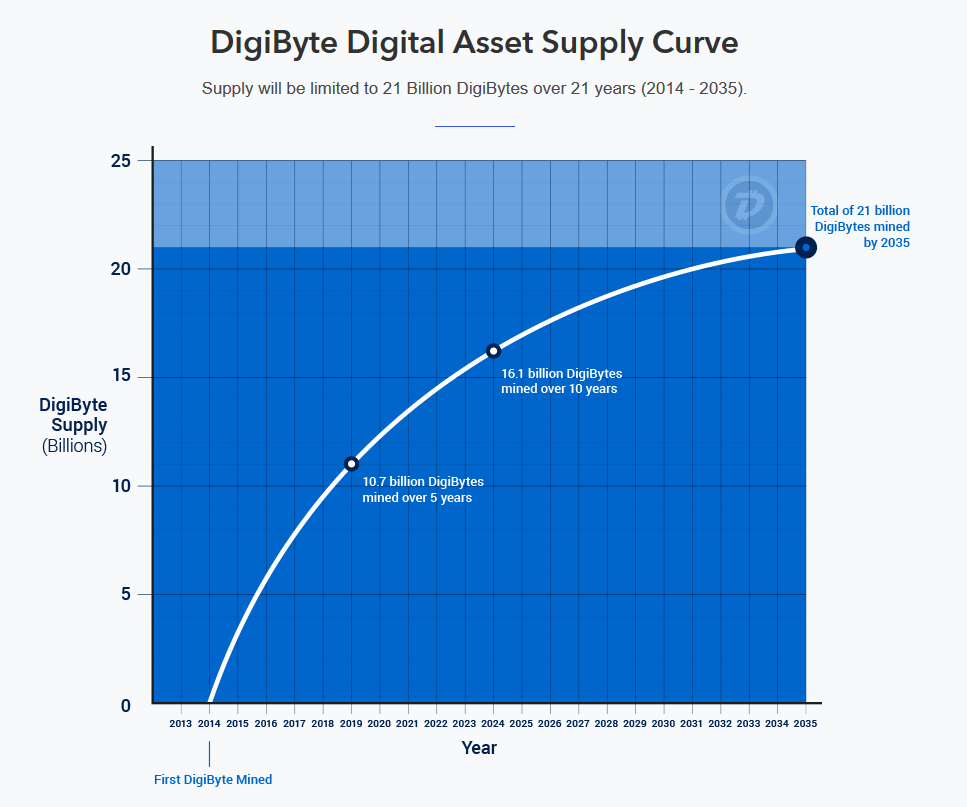 To reach a consensus in the DigiByte network, the DGB blockchain uses a Proof-of-Work (PoW). In contrast to Bitcoin (SHA-256), DigiByte relies on five mining algorithms since the MultiShield hard fork in December 2014:  SHA256, Scrypt, Skein, Groestl and Qubit.

As with Bitcoin, the miners in the PoW must solve complex computing tasks and compete with the other miners for the generation of the next block using powerful computer systems. However, the special feature of DigiByte is that CPUs, GPUs and ASICs can be active in the network. This is achieved by the five different mining algorithms, which practically represent five mining pools. Each of the mining algorithms has its own difficulty within its pool, which is weighted in a dynamic process against the others by a “rebalancing” technology, so that each algorithm participates equally in the creation of new blocks. This process is also known as “MultiShield”.

Each mining algorithm is specifically tailored to the different types of mining hardware. Scrypt and SHA-256 are intended for ASICs. Skein and Groestl are GPU mining algorithms and Qubit is ideal for GPU and CPU mining. 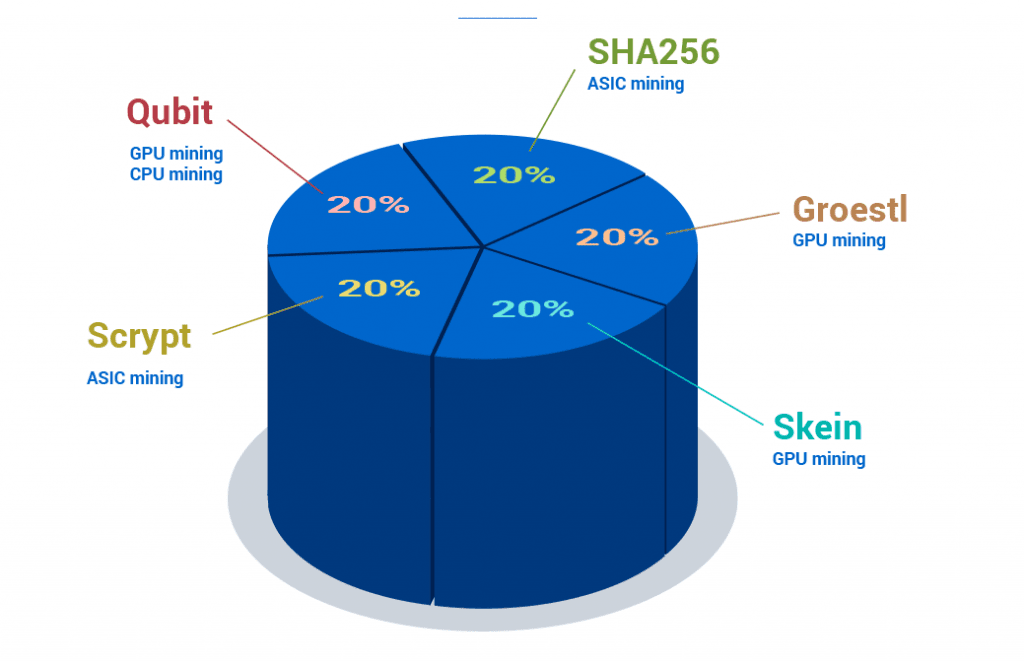 By balancing the five different mining algorithms, DigiByte has succeeded in completely decentralizing the mining process. In contrast to e.g. Bitcoin, no centralization, for example by ASICs, can occur.

The DigiByte block chain consists of 3 layers: the application layer, the digital asset layer and the core protocol layer. 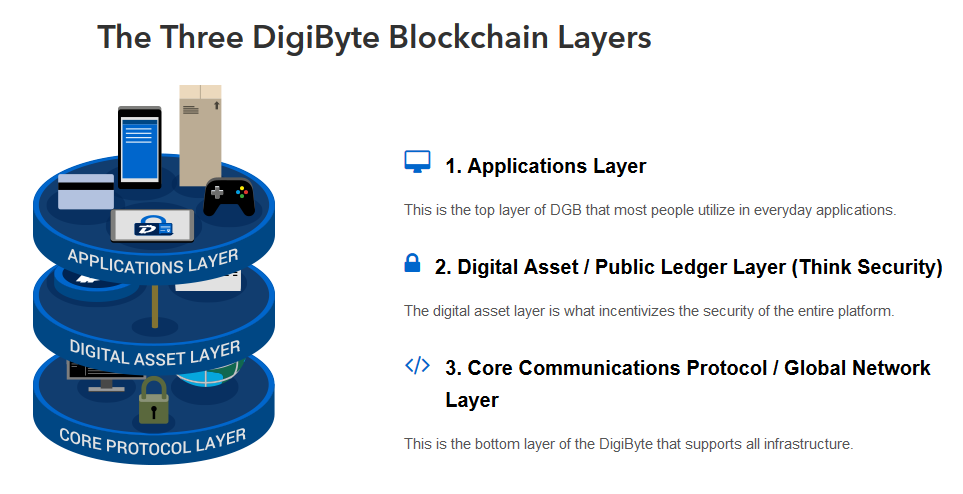 DigiByte is not only one of the older crypto currency projects, but with its technology also one of the most decentralized, fastest and cheapest crypto currencies. Why is this not reflected in the price of DigiByte and a better ranking in the top list by market capitalization?

Theoretically DigiByte had to place itself over the last years marketing technically. Especially in crisis-ridden countries with very high inflation, like Venezuela or Iran at the moment, DigiByte with its technology could be a crypto currency that is used in people’s everyday lives. Dash in particular demonstrated this in 2017 and 2018 in Venezuela, where the adaptation and acceptance of DASH and thus its use have grown enormously. DigiByte overslept this chance a little.

Whether DigiByte can establish itself in the long term and find its market will therefore largely depend on how the project can position itself with a real application case and improved public relations work.