The growing popularity of dApps in 2019 is primarily due to the emergence of blockchain gaming and decentralized financial applications (DeFi), with Ethereum remaining by far the most popular blockchain. Ethereum alone achieved a transaction volume in 2019 of USD 12.8 billion (around 55% of the total market), while EOS recorded USD 6.1 billion and TRON just over USD 4.4 billion in transactions. In terms of transaction volume, IOST followed with $109.38 million and NEO with $99.51 million in 4th and 5th place.

But Ethereum leads the ranking not only in terms of transaction volume, but also in every other categories: number of dApps, active dApps, new dApps and active dApp users. With 1.82 million active dApp users, Ethereum has almost twice as many users as TRON. 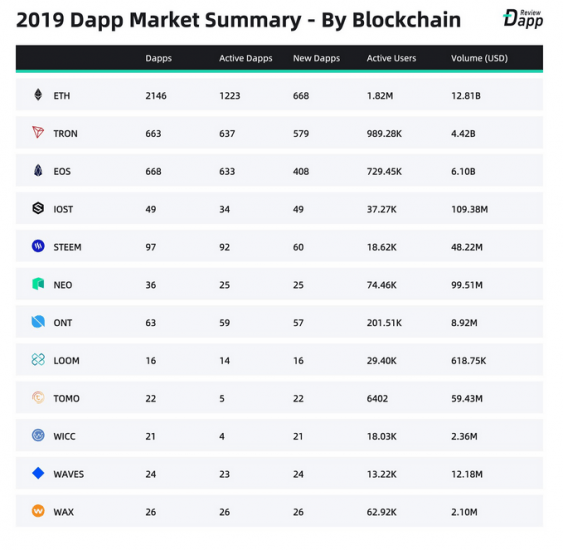 According to DappReview, DeFi (Exchange+Finance) accounted for more than 90% of Ethereum’s transaction volume. Of this, 61.05% was accounted for by exchange dApps and 29.98% by finance dApps. However, Ethereum also has a wide variety of other dApp categories. In terms of the number of active dApps, gaming (304) and casino (235) were the most common applications, along with others (280) and high risk (221). 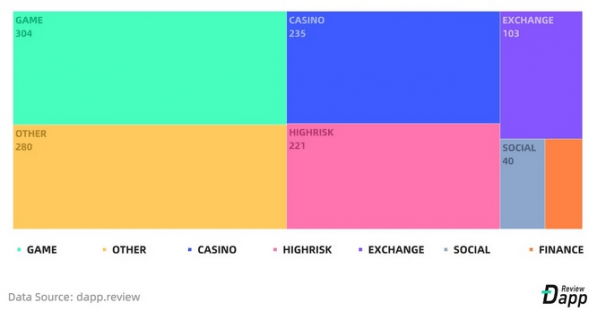 Although the gaming dApps have the most users, the transaction volume is relatively lower than for others. This is because many in-game transactions are not necessarily associated with the transfer of tokens or assets. Instead, many games use non-fungible tokens (NFTs) that are exchanged elsewhere via NFT exchanges, the report states.

TRON is the “Las Vegas on the blockchain”

TRON on the other hand is strongly depending on gambling, which is why DappReview describes it as “Las Vegas on the blockchain”. Of the total of $4.4 billion a year, $3.9 billion came from this category. More than 60 percent of the users account for casino apps. In total, casino-based applications represent more than 90 percent of TRON’s transaction volume, while only 8 percent is due to DeFi activities. The number of dApps was also dominated by high risk and casino dApps. 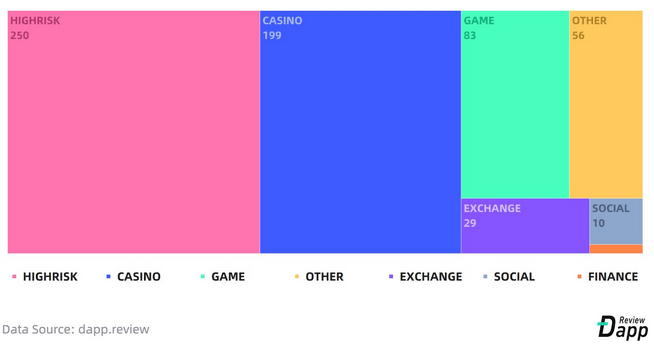 The development of game dApps is relatively slow, according to the report. The number of users has gradually decreased in the second half of the year, so that only 11% of all users come from gaming dApps. In addition, according to DappReview, there were two outbreaks of high risk dApps on the TRON blockchain. One of them was from March to April, when a large number of high risk dApps were launched.

EOS suffers due to technical problems

Although EOS still has a larger transaction volume than TRON, the use of the network has suffered greatly from EOS’ technical problems. In contrast to TRON, however, EOS is more diversified. Gaming, exchanges and other dApps also play an important role at EOS. 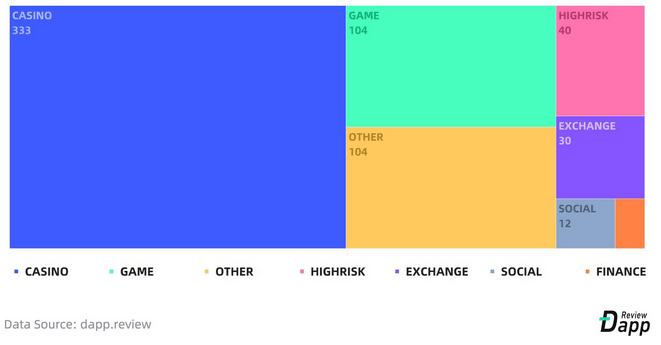 In terms of transaction volume, casino dApps were the main drivers of EOS with a share of 64.6%, although there was a downward trend in the second half of the year. Further, casino and other dApps account for around 40% of the total users. In terms of the number of dApps, casinos (333) dominated, followed by gaming (104) and others (104).

In 2019, the dapp ecosystem of EOS started well but fizzled out, potentially owing to the prohibitive cost of resources and other controversies.

EOS has suffered from congestion problems and cyber attacks that have caused both users and developers to migrate to competing platforms. TRON has now overtaken EOS in terms of both the number of active dapps and active users on its networks.

Several top dApps have left the EOS platform, including the popular blockchain game EOSKnights and one of the very first casino dApps, EOSBet.