What is Cosmos (ATOM)?

Cosmos (ATOM) is a decentralized ecosystem of independent blockchains designed to create the next generation of Internet. Almost every crypto project develops its own blockchain. No matter whether Bitcoin, Ethereum or Ripple, the different technologies are usually not compatible with each other.

Instead of continuing this trend, Cosmos intends to connect all blockchain projects and develop an Internet of Blockchains (IoB). The different blockchains remain independent of each other, but retain the possibility of communication and the exchange of e.g. data and coins. To achieve interoperability, Cosmos (ATOM) uses a Byzantine Fault Tolerance (BFT) consensus algorithm.

As if that wasn’t enough, Cosmos wants to continue solving the following blockchain technology problems:

Cosmos has the following solutions for the problems described above:

This is how Cosmos technology works in detail

Tendermint Core is a Byzantine Fault Tolerance (BFT) consensus engine that bundles the network and consensus layers of a blockchain into a generic engine. This allows developers to focus on application development without having to worry about the complex underlying protocol. The Tendermint BFT has a block time of 1 second and should be able to process a transaction volume of 10,000 transactions per second for 250 byte transactions.

This is made possible by horizontal and vertical scaling. The vertical scaling includes the scaling of the blockchain itself. Tendermint BFT will enable thousands of transactions per second through various optimization measures (e.g. the renunciation of a proof of work).

With its Cosmos Software Development Kit, the Cosmos platform aims to create a friendlier and more customizable solution for developers, where they only have to concentrate on the development of the applications and not on the layers below. With the SDK Cosmos wants to reduce the development time of a blockchain from years to weeks.

The SDK is based on two main principles: Modularity and performance-based security. Modularity means that the goal of the Cosmos SDK is to create an ecosystem of modules that allows developers to easily create application-specific blockchains without having to re-program every functionality from scratch. Performance-based security means the ability to limit the security boundaries between modules so that developers can limit unexpected (harmful) interactions.

The third component is the Inter-Blockchain Communications (IBC) protocol, which enables communication between all individual blockchains. IBC uses the instant finality feature of the Tendermint Consensus to enable heterogeneous blockchains to transfer tokens and data to each other. However, to be compatible with IBC, blockchains must meet an important requirement. The consensus algorithm must have a fast finality.

In principle, all blockchains are compatible with IBCs, whose consensus method uses a rapid finality. However, this is a characteristic that many blockchain projects do not fulfill. For example, all crypto currencies that use a proof of work consensus (e.g. Bitcoin, Litecoin, Dogecoin) do not fall into this category.They have only a probabilistic finality. Only when Ethereum for example switches to Casper FFG (Proof-of-Stake), a direct connection between the Ethereum Blockchain and the Cosmos ecosystem would be possible.

For blockchains that do not have fast finality, however, there is a more complex solution. This creates a special type of proxy chain called the “peg zone”. A peg zone is a blockchain that tracks the state of the other blockchains and itself has a rapid finality so that it is IBC-compatible. 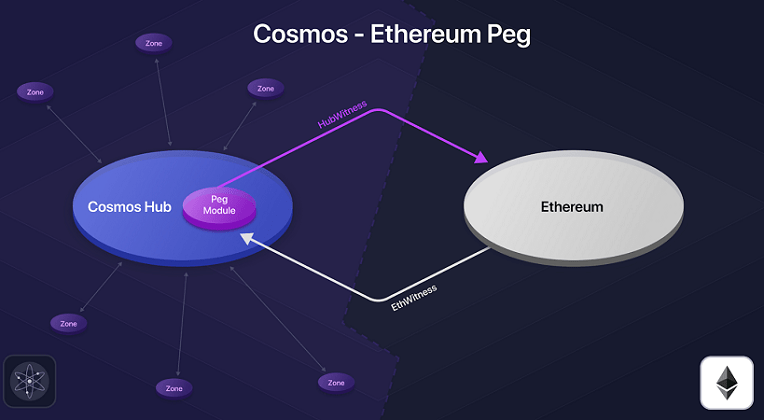 These two solutions allow not only Tendermint-based blockchains to interact with each other, but any kind of blockchain. Another problem is the scalability, because the number of connections in the network grows exponentially with the number of blockchains. To solve this, Cosmos proposes a modular architecture with two classes of blockchains: “hubs” and “zones”.

A hub is a blockchain whose purpose is to connect “zones” with each other. “Zones“, on the other hand, are application-specific blockchains in the Cosmos network (e.g. Ethereum or Bitcoin) that can communicate with each other. This usually works by connecting to hubs via the IBC protocol. When a zone establishes an IBC connection with a hub, it can automatically access any other zone connected to it. As a result, each zone only needs to establish a limited number of connections with a limited set of hubs.

Hubs also prevent double spending between zones. Thus the hubs act as the main sources of “trust” among the blockchains, rather than forcing the blockchains to a common consensus by going through the same consensus mechanism as the tokens for transmission. This means that when a zone receives a token from a hub, it must only trust the “origin zone” of that token and the hub. In addition, each blockchain can select and operate its own governance model (proof-of-work, proof-of-stake, delegated proof-of-stake, DBFT, …).

This creates a series of interconnected zones and hubs that operate independently but share a common system architecture. This is a basic principle of Cosmos (ATOM) for the exchange of tokens, data and digital assets across different blockchains. 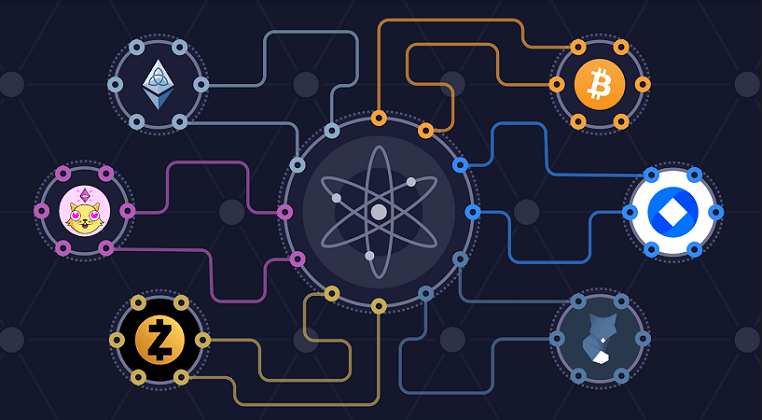 The first hub launched on the Cosmos network is the Cosmos Hub. This is a public proof-of-stake blockchain that uses the Tendermint algorithm and whose native token is ATOM. The Cosmos Hub serves as the central hub of the network and holds the independent blockchains together under one roof.

During the Initial Coin Offering (ICO) of Cosmos (ATOM) on April 6, 2019, 168,475,963 ATOM were released and earned the company behind Cosmos (ALL IN BITS, Inc.) $17.3 million in revenues. About 75 percent of the issued ATOM tokens were sold via the Initial Coin Offering. The remaining shares were held by seed investors (5%), the Cosmos Network Foundation (10%) and ALL IN BITS Inc (10%).

The ICO price was USD 0.10 with a 25% discount for seed investors. There was also a 15% discount for pre-fundraisers. ATOM reached its all-time high on 16 March 2019 at 8.31 US dollars, as you can see on our Cosmos (ATOM) course overview.

ATOM is offered on a variety of cryptocurrency exchanges including Binance, Bitpanda, Huobi Global, Kraken, Bibox and OKEx. Trading pairs include BTC, ETH, USDT and fiat currencies such as EUR and KRW.

Cosmos already has some projects developed with the Cosmos SDK. The most prominent project is the Binance Decentralized Exchange (DEX), which is based on a fork from Tendermint and the Cosmos SDK. Binance DEX uses a revised version of the Tendermint Consensus and peer-to-peer network logic, as well as various Cosmos SDK functions. Other partners include

Conclusion: Is Cosmos worth an investment?

Cosmos is a very ambitious project which aims to build an internet of blockchains. For this purpose Cosmos wants to create an ecosystem that enables the interaction and compatibility of blockchains that are not yet compatible. However, there are numerous other projects in the crypto space that pursue exactly this goal and have only developed other technologies.

The best-known competitors are Cardano, Komodo, Wanchain, Aion, Ark and Polkadot. Some of the projects have been trying to solve the problem of interoperability between blockchains for some time. At this stage, it is difficult to say which project will ultimately prevail. The decisive decision factor will certainly be acceptance and dissemination through “Real World Use Cases”.

If you are interested in buying the ATOM token, we recommend to read our Cosmos-how-to-buy guide (ATOM).