A new report on the CBingights.com website indicates that the amount of venture capital raised for companies in the blockchain industry is set to flourish in 2018, with a drop of more than 30% in 2019 compared to the previous year. The mention of technology in the profit statements of many large companies also declined. However, there is one company that is bucking the trend and leading the ranking.

Many incubators that provide funding for start-ups are investing in new applications for cryptocurrencies such as Bitcoin or Ethereum, as these digital assets continue to promise great growth opportunities. Investment tended to decline significantly last year, but Ripple leads the company with the highest amount of funds raised. The chart below shows this development per month in detail. 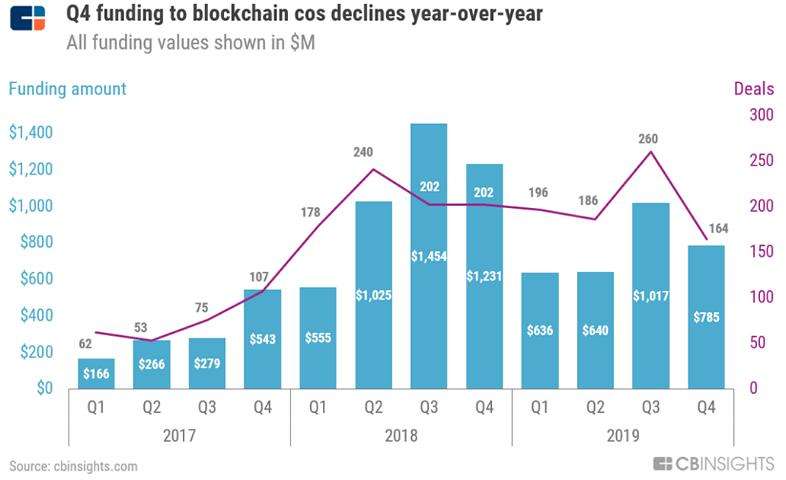 Ripple successfully completed a comprehensive Series C financing round at the end of last year, raising more than USD 200 million in venture capital. The financing round was led by Ripple Partners, SBI Group, Tetragon Financial Group and Route 66 Ventures, and valued the company at $10 billion.

Ripple announced that the capital will be used to improve global payment technology, expand the use of the XRP digital asset and further develop the XRP ledger. According to the California-based company, 2019 was Ripple’s strongest growth year to date. RippleNet grew to more than 300 customers worldwide.

In addition, Ripple CEO Brad Garlinghouse announced that Ripple is planning an IPO within the next 12 months. This step is a logical consequence of the company’s success to date and marks the next milestone in its history. However, the community is sceptical about this step and is currently discussing whether it could have a positive or negative impact on the price of XRP.

Figure Technologies was able to raise $103 million to further expand its proprietary blockchain-based platform Provence. Through Provence, the company is able to provide home loans with an approval time of only 5 minutes.

Digital Assets raised $35 million to fund initiatives by the developer community to support the Digital Asset Modeling Language (DAML), which is used to accelerate the processing of financial assets and expand the applications of the technology.

PeerrNova was able to raise $31 million, which will be used primarily for market expansion and product development. The company’s technology helps financial institutions to manage and design their data workflows more efficiently. Layer 1 raised $50 million in the fourth quarter and will build a solar and wind powered Bitcoin mining facility in western Texas.

Similar figures are also shown by the transaction volumes of the payment corridors to Mexico, where a new all-time high has been reached. The payment corridor to the Philippines has also quadrupled its volume since November to date. Meanwhile, the price of XRP has been unimpressed, rising 0.73% to USD 0.2501 in the last 24 hours.