Yesterday the IOTA Foundation published a new blog post about the concept vehicle CityBot. The autonomously driving car was presented for the first time at the International Motor Show 2019, in September, in Frankfurt and is being developed by EDAG in cooperation with the IOTA project. In the new article, IOTA highlights the advantages of the project.

EDAG and the IOTA Foundation have been working together for a long time on various mobility issues, such as smart parking. In September, both partners presented the CityBot concept, which uses IOTA for a secure communication and payments. As IOTA writes, the CityBot is intended to contribute to a sustainable future:

Urbanization is one of the megatrends shaping our future and it comes with challenges that need to be addressed. More and more people are moving into cities, traffic and pollution become major problems and endanger our planet.

The EDAG CityBot is a city runabout that uses fuel cell propulsion to move in a climate-friendly manner and is intended to show how fully autonomous driving could work in cities in the future. The special feature of the CityBot is that it never stands still and is designed to use urban resources efficiently. Thanks to various ” Hero modules “, which can be changed according to requirements, it can be used in a variety of different applications, for example as a group taxi, a clean-up vehicle, a supermarket hero, a delivery vehicle or a party vehicle. 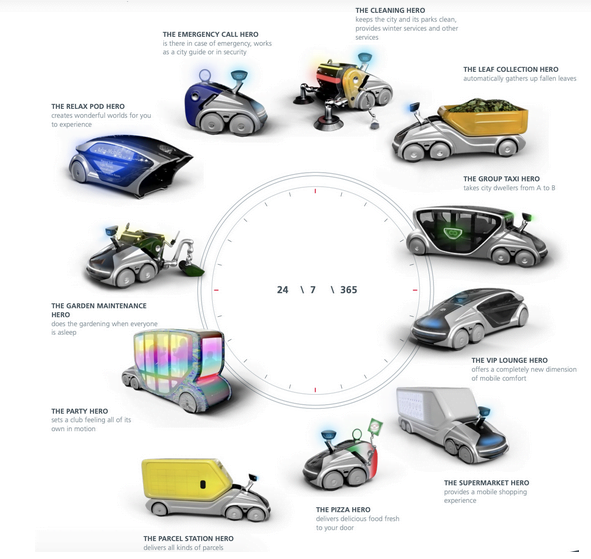 As IOTA writes, the various service options can be provided around the clock, for example on an IOTA-enabled marketplace such as the IOTA Industry Marketplace, where digital and physical goods can be automatically traded by machines. EDAG’s vision thus aims at a multifunctional vehicle that is active 365 days a year and 24 hours a day and does not stand still. This creates space in the urban environment that would otherwise be required for parking.

In this concept, IOTA serves as a data transfer and payment protocol between machines (“machine-to-machine”). Due to its free-of-charge character, IOTA can fulfil two tasks. By using the IOTA Tangle protocol, vehicles can automatically communicate and exchange data with each other and with other services, such as parking gates.

If payments are due, they can be processed via the IOTA cryptocurrency. The CityBot can also accept payments, for example for taxi services. IOTA summarizes the application scenarios as follows:

IOTA’s influence on the automotive industry

The CityBot is already IOTA’s second project, together with EDAG. Previously, EDAG, as the leading development service provider for the automotive industry, had already introduced a car park app that used IOTA as a payment tool which is now also integrated into the EDAG CityBot.

In addition, IOTA has already been able to establish contacts and cooperations in the automotive industry with industry leaders such as BMW, Jaguar, Volkswagen, Audi and Mercedes Benz. As early as September 2018, Volkswagen and IOTA announced for the first time that they would launch the first blockchain-capable car as part of the “Digital CarPass” in 2019. Volkswagen intends to integrate IOTA blockchain technology to enable users to offer new services and pay for them themselves.

Crypto News Flash does not endorse and is not responsible for or liable for any content, accuracy, quality, advertising, products, or other materials on this page. Readers should do their own research before taking any actions related to cryptocurrencies. Crypto News Flash is not responsible, directly or indirectly, for any damage or loss caused or alleged to be caused by or in connection with the use of or reliance on any content, goods, or services mentioned.
IOTA
Previous ArticleVeChain partners with DNP Group for a clean environment
Next Article Ethereum developer arrested for passing knowledge about blockchain to North Korea