VeChain is a highly complex project that has had a working product since its official launch in 2015. The VeChainThor blockchain is used in the most diverse areas of the economy and industry and fulfils various applications.

VeChain has cooperations in the financial, automotive, insurance, food and beverage sectors, as well as in many other economic sectors. The latest cooperation with DNP Group is intended to improve environmental conditions.

The Dai Nippoin Printing Group (DNP) is one of the world’s largest diversified printing companies and an official partner of the Tokyo 2020 Olympic and Paralympic Games, according to VeChain’s official press release.

DNP has launched a new PoC project for a sustainable and circular economy under the leadership of VeChain ToolChain to contribute to an environmentally friendly society. DNP has market capital of more than $10 billion, annual sales of $12,800 billion and produces more than 30% of all beverage bottles throughout Japan.

On October 15, 2019, DNP unveiled “The Time for Social Good” at the DBIC Singapore Innovation Acceleration Program Demo Day. Through the collaboration between VeChain and distributor Brisbane’s Fresh Supply Co (FSC), the project aims to encourage people to recycle coffee cups by tracking their behavior from purchase to disposal using blockchain technology. 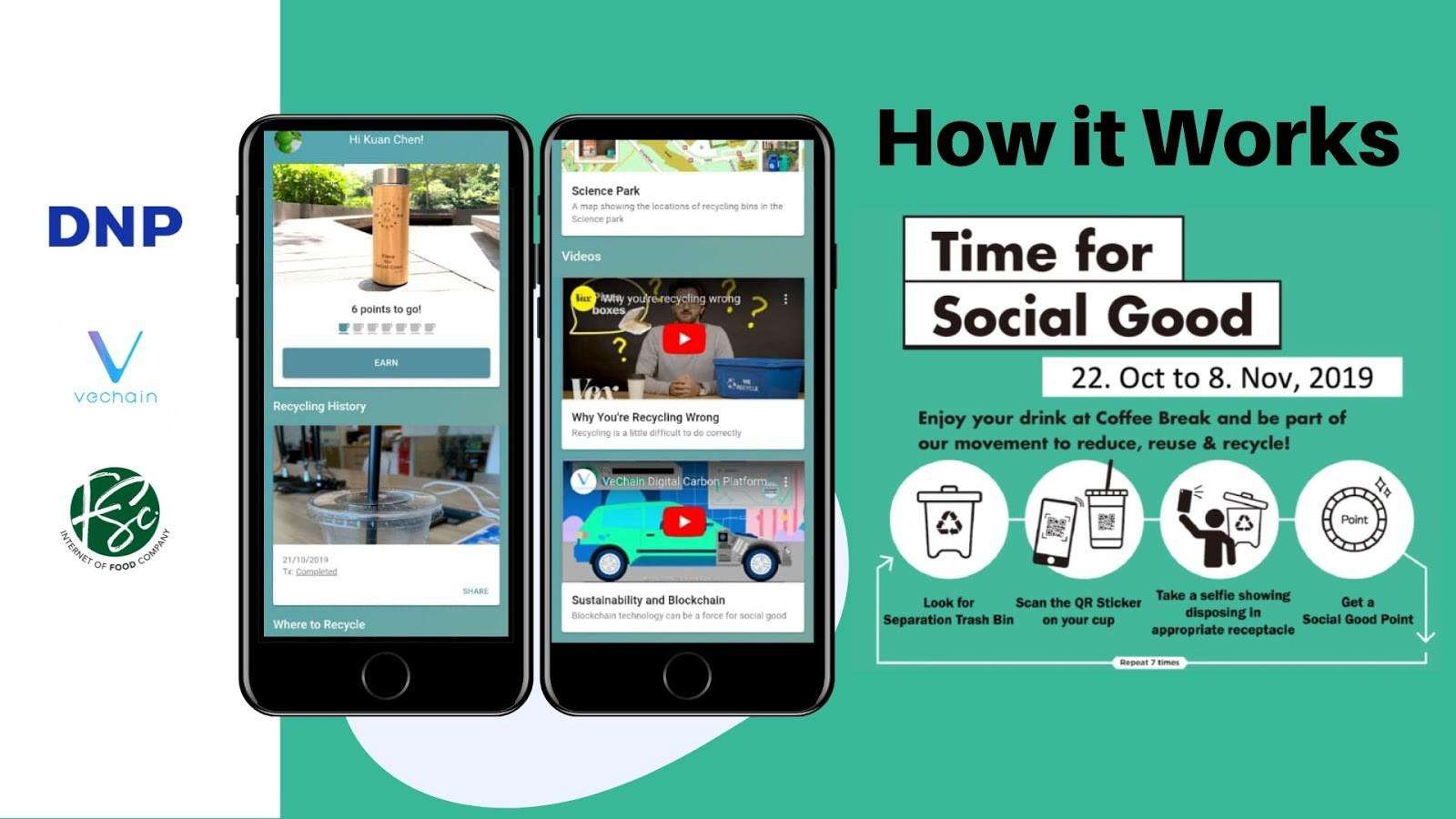 For each coffee cup, 8,000 unique identifiers were generated on the VeChainThor blockchain, allowing customers to scan them with their mobile phone to get information about the campaign. Through the digital identity software provided by FSC, DNP was able to capture consumer information as well as the geolocation of scans.

To earn Social Good points, users must scan the cup’s QR code, take a photo of the cup, or upload a selfie from the designated recycling bins. Each upload is recorded on the VeChainThor blockchain as a new change in the condition of the cups from “purchased” to “recycled”.

All transactions are timestamped on the VeChainThor blockchain so that anyone can verify the transaction. All data stored on the blockchain is unchangeable and cannot be manipulated.

Once users have collected a certain number of points, they can redeem the points for a good cause and receive a handmade bamboo bottle made by a socially engaged Indonesian company. Sarah Nabaa, General Manager at VeChain SEA, describes that the project will encourage people to be more aware of their coffee consumption and the environment:

This campaign educated coffee drinkers on how to recycle their coffee cups correctly by separating the lid from the cup. Public blockchain is as an enabler for sustainability initiatives, it serves especially well as a driver for all stakeholders to make a circular economy work.

Most recently, VeChain presented a traceability platform in cooperation with the Shuangjiang government in China. The use of VeChain’s traceability tool is intended to guarantee that Pu’erh tea is of the highest quality and comes from a certified producer. This is intended to combat product piracy.

VeChain has also entered into a partnership with the ASI Group to introduce the first cross-continental logistics and trading solution on the VeChainThor Blockchain. An interface between French producers and Chinese buyers is to be established via the Blockchain to monitor beef production.