Cardano has launched the Shelley Incentivized Testnet in preparation for the Haskell Testnet, so that all developers and other stakeholders can pilot key functions in a secure test environment and check for errors. The launch in December last year went surprisingly well, with more than 240 stake pools already formed within the first 48 hours and over 5.4 billion ADAs delegated, almost 17 percent of the total supply.

The SIT now has more than 15,232 active users and 1046 stake pools have already registered. Of these, 672 count as active because they have delegated at least one ADA. In total, almost 11.35 billion ADAs have been staked and delegated so far. The community has been significantly involved in several tests of various bugs and has provided valuable feedback to the developers. 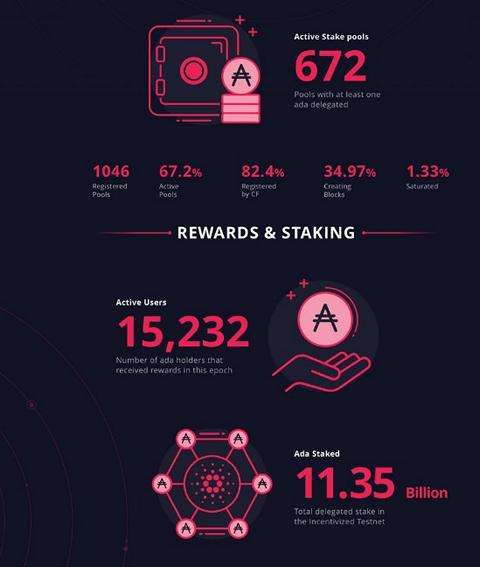 I had a smooth learning, I was new to Linux but everything [for setting up a stake pool]went smooth and was fun.

Hoskinson describes that Cardano is to become the most decentralized crypto currency in the world as soon as all technical milestones of the roadmap have been completed:

[…] once completed, we will tend to become the most decentralized cryptocurrency in the world, yet still be able to govern itself, sustain itself, and be able to do with threats internal and external to its existence.

Cardano shows a strong development in the last weeks and was able to establish numerous new partnerships. These include cooperation with the Georgian and Uzbek governments, where the blockchain is to be used in public administration. Cardano was also able to win ScanTrust and the Berkman Klein Center of the renowned Harvard University as cooperation partners at the World Economic Forum in Davos.

In the next development phase Goguen, the Cardano ecosystem will be extended by Smart Contracts functions, thus integrating another important component that makes the platform interesting for a variety of different industrial players. The renowned crypto expert Sydney Ifergan describes that many companies are already waiting in the observer position for Cardano to be commercially viable from the corporate side:

Cardano ADA Community is supporting and growing the Cardano Ecosystem. It is very evident that several companies are waiting in the sidelines for the peer-reviewed engineered solution provided by Cardano.

Cardano is working on many further developments, so that it is first necessary to wait and see whether the products still to be presented can meet the expectations of companies and investors.

Cardano (ADA) on an upward trend

From the beginning of the year until today, ADA has been able to increase its price significantly and has recorded a price increase of 65.64% within the last 30 days. In the last 24 hours, the Cardano price has moved sideways (- 1.17%) and is at USD 0.060 at the time of the reaction.