In a recent interview, Michael Sonnenshein, Managing Director at Grayscale Investments, spoke about the decision of the US Securities and Exchange Commission to recognize the Grayscale Bitcoin Trust as a reporting company. According to Sonnenshein, the decision demonstrates the progress that the crypto market has made. Sonnenshein commented:

Grayscale Bitcoin Trust becoming an SEC reporting company really should signal to the community that our regulators are really willing and able to engage with the digital currency asset class.

This recognition of Grayscale’s Bitcoin Trust as a reporting company is the first of its kind in the history of the crypto market. In addition, Sonnenshein said it shows the high level of adoption that Bitcoin has achieved. The SEC’s recognition will make Bitcoin Trust a product close to traditional offerings and will have the ability to attract more investment to the crypto market.

The CEO of Grayscale Investments also spoke of Bitcoin’s progress against other traditional assets. He said that in addition to becoming a store of value, Bitcoin is also a safe haven that is highly regarded and has taken over the space of gold and other assets in markets with dislocation:

(…) Bitcoin is now a safe haven, a store of value, when there are dislocations in the market and investors can really think about that role, which gold and bonds, quite frankly, used to occupy. Now, Bitcoin is part of that conversation

Sonnenshein’s statements are particularly true in countries with economic crisis such as Venezuela, Argentina and Iran. The loss of value of the national currency in the former countries has caused the population to use Bitcoin as a safe haven. This is evidenced by the high trading volume of the countries on peer-to-peer platforms such as LocalBitcoins.

Bitcoin Halving will bring it closer to Gold

A study by Coinbase is looking in detail at the characteristics of Bitcoin and Gold. The Coinbase study published on 7th February states that the market capitalisation and demand for gold is maintained by the scarcity of supply. The study also acknowledges that Bitcoin has become a rival for Gold as a store of value. 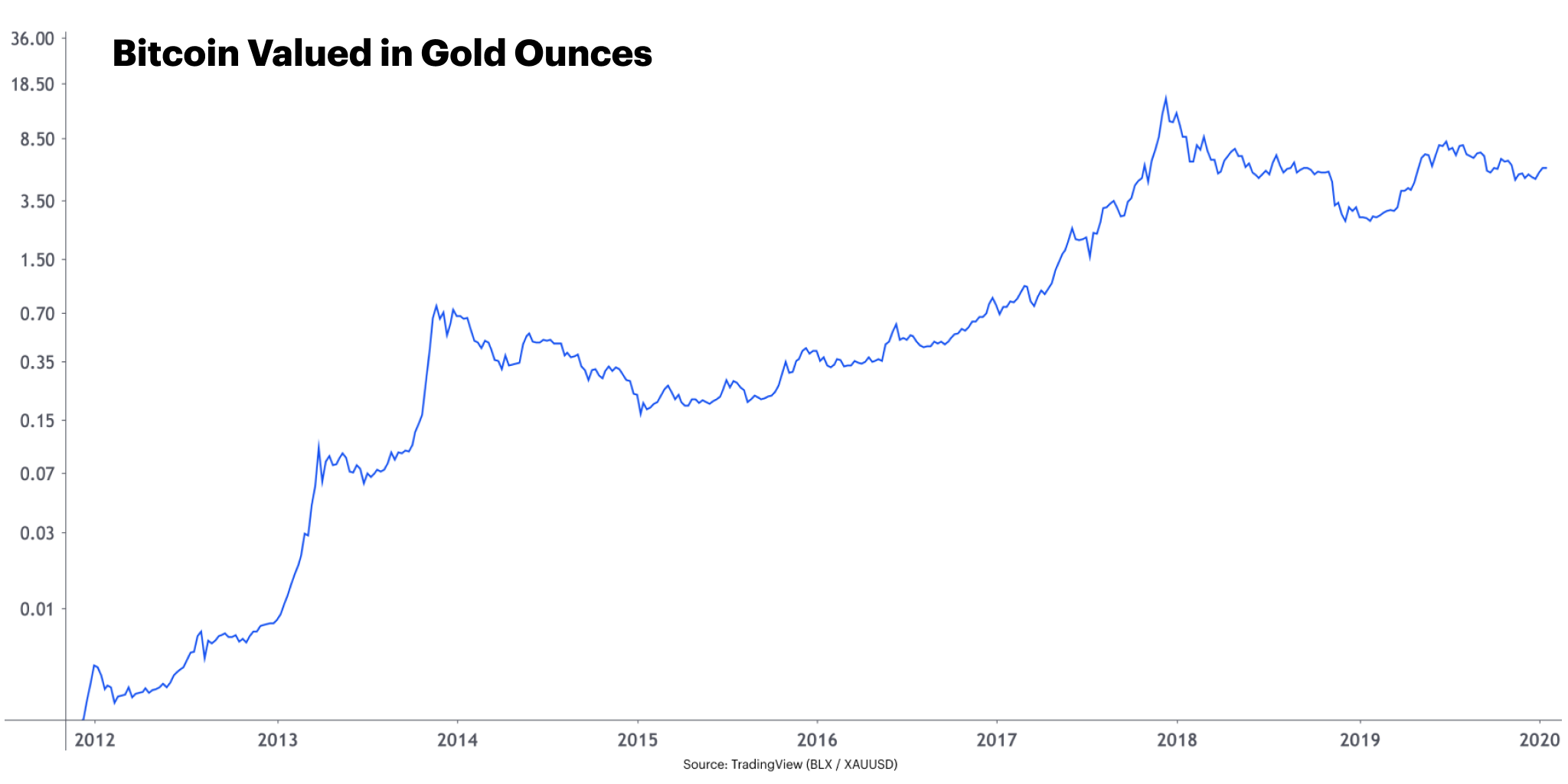 The graph above shows how Bitcoin has been gaining purchasing power over Gold. Since 2013 the value of Bitcoin has increased significantly. Coinbase states that both assets, Bitcoin and Gold have the characteristic of being scarce. However, Coinbase makes the following distinction:

While we have best estimates, no one knows with perfect certainty how much Gold exists above ground; There is no way to independently verify the total Gold supply. With Bitcoin, anyone with even the simplest computer, such as a Raspberry Pi, can verify the entire Bitcoin supply in existence.

Coinbase claims that at the next Bitcoin halving in May, Gold and Bitcoin will have an almost identical value of ~58. As reported by CNF, the stock to flow is a measure of the relationship between the scarcity of an asset and its current supply and production level. This model predicts a positive impact on BTC’s price.

Furthermore, Coinbase claims that not only the stock to flow will be similar to Gold, but that it will have a positive effect on Bitcoin. The investigation points out that BTC has managed to reduce its level of volatility and that it has intrinsic characteristics that demonstrate that it is superior to gold. Therefore Coinbase concludes:

This past decade, Bitcoin’s value in Gold has risen significantly amid surging global economic uncertainty. Gold, and Bitcoin, are safe havens from fiat currency devaluation, which historically tends to be incited by surging government debt. Armed with a myriad of technological advantages, accelerating development, and maturing global market, Bitcoin is a store of value to rival gold in the digital age.