At the beginning of 2020, the price of Bitcoin and all major cryptocurrencies have recovered after some disappointing months at the end of 2019. As the controversial “stock to flow” (S2F) model shows, the trend could continue throughout the year 2020, while the price of Bitcoin is now in a resistance range above S2F.

The stock-to-flow model is relatively new and is heavily discussed in the crypto community. S2F is based on assessing the ratio between the shortage of BTC, in this case, and the current supply together with the amount of production to determine the impact on the price, as defined on the website of Digitalik:

Bitcoin Halving could be crucial in driving the price

One of the proponents of the S2F model is the analyst Plan B (@100trillionUSD on Twitter). According to a recent publication, the analyst claims that the Bitcoin halving will have a highly positive effect on Bitcoin’s price following the referred model. The upcoming Halving in May will be no different and, according to Plan B, the S2F will double and the market value will increase by the factor of 10.

As shown in the graph below, the price of Bitcoin in 2020 is constantly above the S2F price. Only 3 months before Bitcoin is halved, the BTC price is thus on a rising path according to this model. 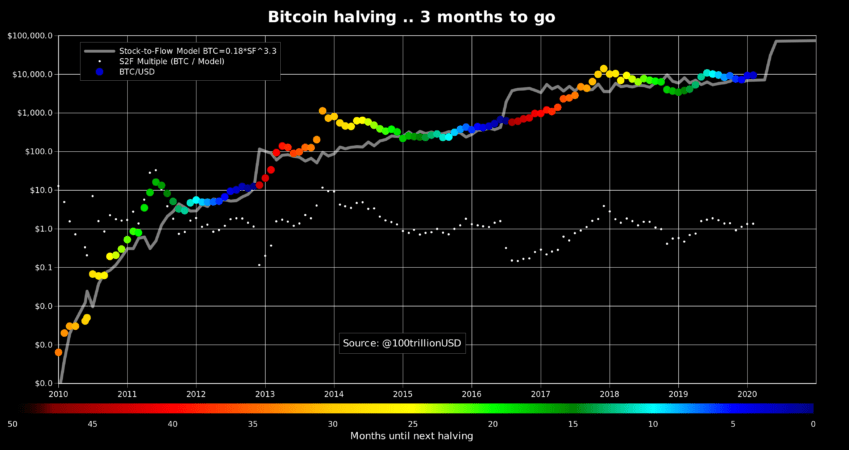 In his analysis, Plan B writes the following to illustrate the above diagram in more detail:

Because Halvings have such a big impact on SF, I put months until the next halving as a color overlay in the chart. Dark blue is the halving month, and red is just after the halving. Next halving is May 2020. Current SF of 25 will double to 50, very close to gold (SF 62). The predicted market value for bitcoin after May 2020 halving is $1trn, which translates in a bitcoin price of $55,000.

However, there is no consensus in the Community on this model and thus the conclusions of Plan B are not uncontroversial. One of the critics of this model is the Alef Bit Technologies. According to a publication on their website, Alef claims that the S2F model fails to measure physical asset characteristics, such as scarcity, in digital assets. Alef Bit Technologies states:

Therefore, a model that relies on the current price of gold will likely prove inaccurate in the near future.

Furthermore, the publication explains that the S2F model has not defined limits in its analysis. To illustrate this point, the publication cites the question of another S2F critic, Tuur Demeester, who states that according to this model the price of BTC tends to infinity because the output of BTC supply (newly mined Bitcoin) will reach 0 at some point.

Other analysts such as Peter Brandt agree that there are bullish signals for the price of Bitcoin. Although he is not using the S2F model, Brand explains that a symmetrical triangle has formed in BTC’s performance since late 2017. His analysis connects the quarters of the past three years and concludes that the price of BTC will push to $100K before the end of 2021.