Veteran trader Peter Brandt made predictions about the performance of Bitcoin’s price for the coming months. Brandt said that the number one cryptocurrency by market capitalization is showing signs of a bullrun that could take it past $100K before the end of 2021.

The veteran trader said that the recent bear market can be connected to the one that occurred in December 2018. Thus, the parabolic movement that BTC is developing can be redefined. Brandt said the following:

I don’t want to get too far ahead of myself because I can make an argument here that I’m not sure really can be made yet – that we’re going a lot higher than $100,000, and it won’t be until 2021

Furthermore, Brandt made a connection between the price behaviour of BTC in December 2017 and the following years. The following graph shows the parabolic movement to which Brandt refers: 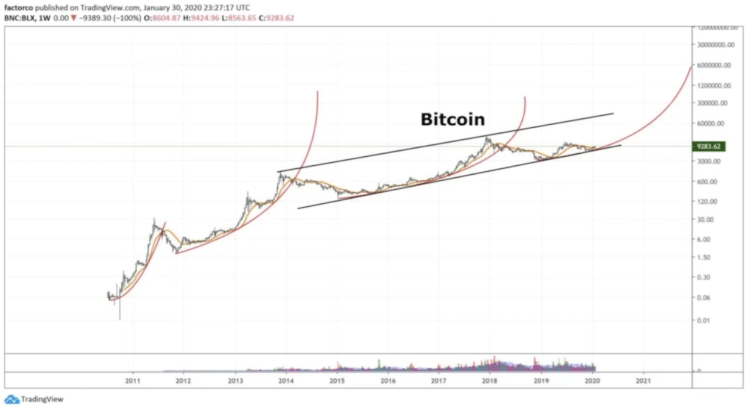 Brandt explained how a symmetrical triangle has formed in BTC’s performance since late 2017. This phenomenon could lead to what Brandt calls a symmetrical cap:

I’m going to look at it as a symmetrical triangle continuation, and as time goes on and we start to challenge this upper line, especially if we take out the highs that we made back here in June, then we’ve completed this symmetrical triangle, and we can really start accelerating the bull trend in Bitcoin. 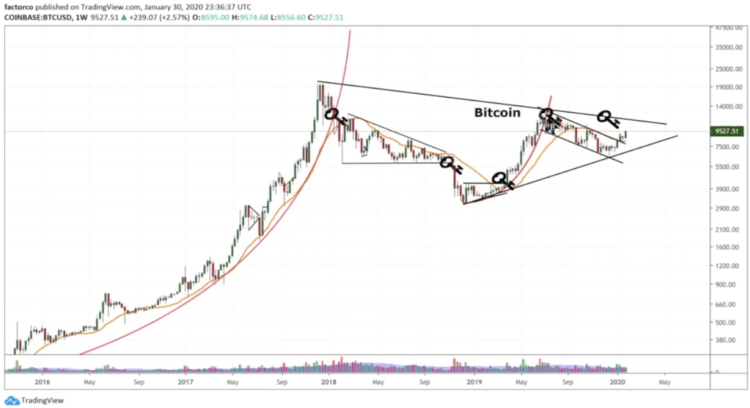 Keep your eyes on Bitcoin (BTC)

Brandt was also optimistic about Litecoin. The veteran trader said that it shows similar signals to Bitcoin and that the current pattern in the LTC price has always been “magical” with Litecoin. Brandt ruther explains:

The big ascending triangle that blew off in 2017 and you had another triangulation (in 2018). You’ve had different triangulations taking place, especially symmetrical triangles in Litecoin

Below is the chart Brandt uses to make his study of the current pattern in the LTC price: 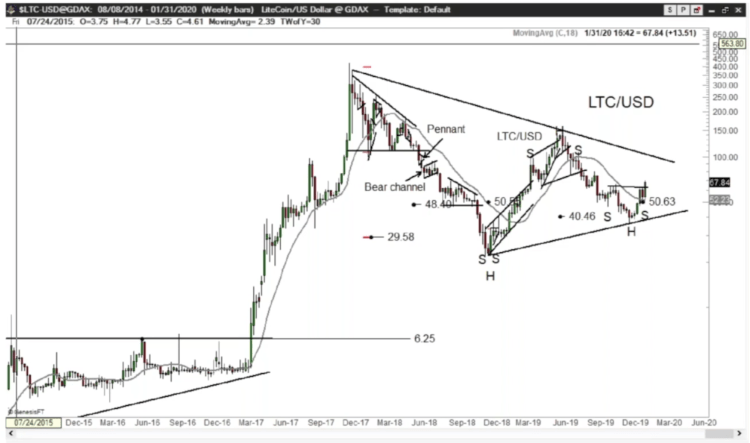 On the other hand, Brandt also referred to the price of Ripple’s native token, XRP. The trader confessed that he is not enthusiastic about XRP, but that its price could go up soon. However, Brandt also said that just as the price may go up, it is very likely to go down. Therefore, he recommended keeping the attention on Bitcoin:

XRP may very well be a boomer, but it’s also going to be a buster. So my focus will continue to be on Bitcoin and I’ll look at Bitcoin as the litmus test of everything else..

As we already reported in our last analysis of Bitcoin, it is also concluded that BTC is in an upward trend. Furthermore, it is stated that the predominant market sentiment is bullish and therefore the rally is stable. The price of Bitcoin trades at $9,404 and has moved sideways (-0.22%) in the last 24 hours.