At the recent Coindesk Invest Asia Conference, the co-founder of Coingecko, Bobby Ong, gave a very interesting but underestimated speech on the impact of Asia and China on the global cryptocurrency market. In the following we would like to provide a summary of the presentation, which was also published in more detail on Coingecko. Furthermore we would like to present some interesting background information.

The first interesting point Ong addressed was Bitcoin Mining. While 5 years ago this was hardly influenced by Asian miners – there was only one Asian Bitcoin mining pool in the top 10 – the current Bitcoin hash rate distribution shows that 8 out of 10 Bitcoin mining pools originate from China and control 80 percent of the hash rate of Bitcoin. Only two mining pools do not come from China, namely Slushpool (Czech Republic) and Bitfury (Georgia). 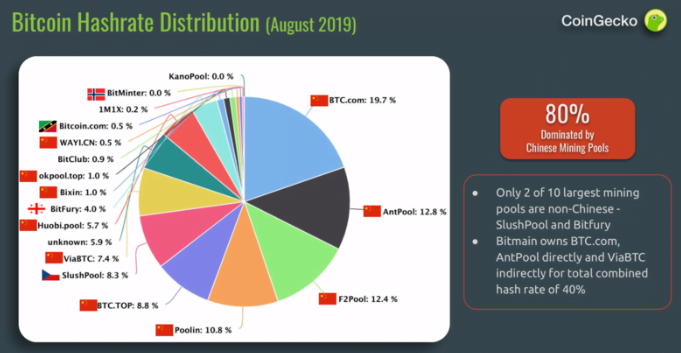 It is also interesting to note that the mining giant Bitmain provides the two largest mining pools with BTC.com and AntPool. Since Bitmain also has a certain influence on the seventh largest mining pool through its stake in ViaBTC, the Chinese ASIC manufacturer holds around 40 percent of Bitcoin’s total hash rate.

According to Coingecko, the situation for Ethereum (ETH) is similar. According to the survey results, 6 of the 10 largest Ethereum mining pools originate in Asia, with 5 from China and 1 from South Korea. Overall, the Asian market accounts for 49 percent of the total hash rate of the ETH network. 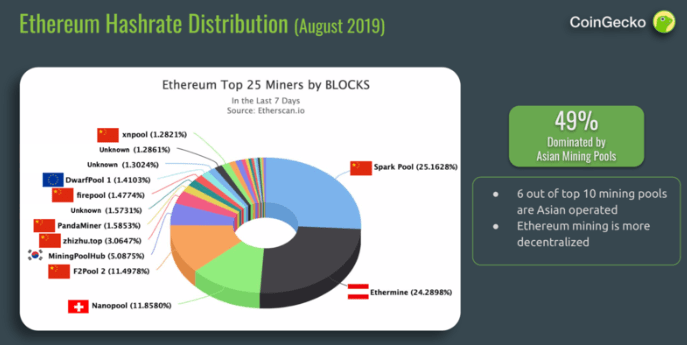 As Ong noted, this trend applies to all cryptocurrencies that use a proof of work. It is surprising, however, that cryptocurrencies that rely on a (delegated) proof of work are also largely dominated by Asia. In contrast to mining, the advantage of cheap electricity in China is not applicable here. Since the competitive conditions are the same for all participants, it can be expected that Asia will be less dominant.

As Coingecko also noted, Asia is also the leader in innovation. Above all, Binance has launched numerous initiatives that are now being copied by other exchanges. For example, the exchange token model was developed, which is now the de facto standard for operating an exchange. At the beginning of the year, Binance also developed the Initial Exchange Offering (IEO), which was copied by other exchanges such as Bitfinex and Huobi.

But Binance is not the only innovation leader. Beyond Ong’s keynote speech, there are numerous other examples and reasons why Asia is currently dominating the cryptocurrency market.

These are just a few examples about the adoption of cryptocurrencies in Asian countries, which are far ahead compared to Europe, the USA and also South America. In addition, there are, of course, many other countries in Asia that promote innovation in the cryptocurrency field, including Thailand and Taiwan. In this respect, Asian dominance should not surprise anyone.

You can watch Bobby Ong’s complete keynote in the video below:

Bitcoin Blockchain Ethereum
Previous ArticleNew study: This is how Tether influences the Bitcoin price in 2019
Next Article What is Zcash (ZEC) – A guide to the anonymous cryptocurrency