In particular, larger analysis companies, but also individual persons, can link individual transactions with each other and identify related payments and thus track the activities of the Bitcoin user. By linking the transaction data with the personal data stored on cryptocurrency exchanges, even the user can possibly be fully identified.

This problem can be avoided by Bitcoin-Mixer. However, mixers have some disadvantages. For example, the user must trust the provider of the tool to return the BTC. In addition, users of mixers must trust that the provider will not pass on the user data and that their own transaction will not be associated with criminal transactions.

Due to the problem described above, Zcash (ZEC) was developed by the Zerocoin Electric Coin Company and forked by the Bitcoin Blockchain on October 28, 2016. Zcash is a decentralized peer-to-peer cryptocurrency that belongs to the Privacy Coins, such as Monero (XMR), Dash (DASH), Bytecoin (BCN), Verge (XVG), PIVX, GRIN and Bitcoin Private. This means that ZCash is a cryptocurrency which hides the data of its users and in particular the receiving address, the sender address and the transaction amount from the public.

Like Bitcoin, ZCash has a maximum supply of 21 million. At this point, however, the common features of the two cryptocurrencies already end. In addition to complete anonymity, the ZCash developers have made numerous other changes to the Bitcoin code:

At the heart of the Zcash technology, however, are the so-called “zero-knowledge proofs”, which make it possible to validate transaction data without disclosing information about the amount and the parties involved.

The science behind Zcash

The technology of Zero Knowledge Proofs was developed in the 1980’s thanks to the work of MIT researchers Shafi Goldwasser, Silvio Micali and Charles Rackoff and represented a scientific breakthrough in the field of cryptography. The Zero Knowledge Proofs solved the initially difficult to understand problem that knowledge about something is verifiable without revealing the information.

From a technical point of view, the problem can be described as two parties (the proofer and the verifier) communicating with each other and the proofer having to convince the verifier with a certain probability that he knows a secret without revealing any information himself. In order for the verifier to do this, Goldwasser, Micali and Rackoff have established three three conditions that must be fulfilled:

The next two letters stand for “ARguments” and mean that dishonest actors have virtually no way to crack the encryption due to today’s limited computing power. This would require quantum computers, which many consider a threat to zk-SNARKs, Bitcoin and the blockchain in general. The last part of the acronym stands for “knowledge” and means that it is impossible for anyone to construct the evidence without actually possessing the information.

When using zk-SNARKs, however, there is a big problem: An initial creation is necessary, which is called a “parameter generation ceremony“. During this ceremony, the so-called public SNARK parameters, which are used to create and verify zero knowledge proofs, are created. The parameters are necessary to prove that a transaction was valid.

If this would succeed, the attackers could create a copy of the private key and thus fake Zcash. To prevent this, the Zcash developers have developed a Multi-Party Computing Protocol (MPC), in which a number of multiple participants participate in a ceremony that jointly create the parameters.

The first ceremony took place in October 2016 just before the launch of Zcash Sprout. It is important to note that the SNARK public parameters must be regenerated each time the network is upgraded. Accordingly, there was a second ceremony for the Sapling upgrade in 2018. With each further upgrade, the SNARK parameters must be created again.

The following video provides a detailed description of the first “Parameter Generation Ceremony”.

As explained before, the integration of zk-SNARKs allows to hide the address, quantity and memo data within the Zcash blockchain. Important to know at this point is that not every transaction in Zcash is anonymous. Zcash users have the choice of sending the ZEC transactions anonymously via so-called “shielded addresses” (z-addresses) or transparent (t-addresses). Many cryptocurrency exchanges only offer transparent transactions.

Shielded addresses can be identified by starting with 'z' while transparent addresses start with 't'.

Both address types are interoperable. This means that ZEC can be sent from Z addresses to T addresses and vice versa. However, it is important to know the result which privacy implications bring. The following graphic provides an overview of this:

The motivation behind the sapling upgrade was that shielded addresses found little acceptance among wallet providers (you can find the best Zcash Wallet in our Zcash review) and exchanges. One reason for this was that the anonymous transactions before the introduction of Sapling required considerable computer resources.

Sapling has therefore reduced memory requirements by over 97 percent, from around 1.5 GB to 40 MB. This also reduced the processing time for the Zero Knowledge Proof by 90 percent, from 37 seconds to 2.3 seconds. 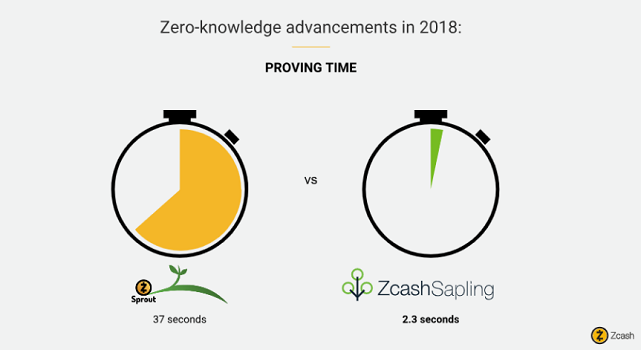 Who finances the further development of Zcash?

The Electric Coin Company is responsible for the further development of Zcash, which benefits from part of the “Founder Reward” and plans two network upgrades per year. The team consists of scientists and developers who invented the Zcash protocol. Lead figure and best-known developer is Zooko Wilcox, who co-founded Zcash in 2016.

The Electric Coin Company writes about its mission on the official website:

We are not the ultimate controllers of the network — that power lies in the hands of the users. We believe in decentralization, which promotes security and fairness. Every user of Zcash is a part of the network, and helps protect it against failure and corruption.

One controversy that has been more frequently criticized by the crypto community in the past is the “Founders Rewards”. Since Zcash did not conduct an Initial Coin Offering (ICO) and there was no pre-mining, the 20 percent Block Reward is intended to secure Zcash’s future development. A total of 5.72 percent of all Zcash go to the founders, employees and consultants of Zcash. In addition, 1.65 percent will go to the investors who financed the establishment of Zcash.

The largest individual beneficiaries are the Electric Coin Company with 1.19 percent and the non-profit Zcash Foundation with 1.44 percent. Both institutions are responsible for the promotion, maintenance and further development of the Zcash protocol in the interest of all users.

Like Bitcoin, Zcash is a cryptocurrency that is mined. As explained earlier, Zcash uses the Equihash algorithm as the basis for his proof of work. This means that each time a block is added to the Zcash block chain, new ZECs are created. New blocks are created approximately every 150 seconds (2.5 minutes), with currently 12.5 ZEC generated per block.

An important reason why Equihash was originally used by the inventors of Zcash was that Equihash was initially considered ASIC unfriendly. This should prevent a centralization of the Zcash network. In June 2018, however, the Chinese mining giant Bitmain announced the delivery of the first ASIC miners for Equihash.

In contrast to Monero (XMR), the Zcash developers did not modify the mining algorithm to prevent the ASICs from entering the ZEC network. Since then, the previously used graphics card miners are no longer competitive and the ZCash network is dominated by ASICs.

In particular, the first “Genesis Ceremony” caused an outcry within the crypto community because there was a lack of transparency and many observers saw the danger that an infinite number of ZCash could be created by the ceremony participants without anyone noticing.

The ceremony was then performed by Zooko Wilcox and five other people whom he considered to be “ethically sound”. Everyone was asked to generate a shard of the public-private key set. The basic idea of the ceremony was that only one “honest” participant was needed to destroy his part of the key so that the “toxic waste” would not be usable.

The only way to reconstruct the parameters would have been for all six participants to coordinate. If this had been the case, the persons would have been able to make a copy of the private key and thus fake Zcash. Due to the anonymity of Zcash, it would never have been noticed that ZEC had been created beyond the measure of 21 million.

That’s why the criticism from the community was so strong. Even though five participants are now known, including the renowned Bitcoin developer Peter Todd, the Genesis ceremony is still considered a weak point for Zcash.

Since the Genesis Block Ceremony, however, ZCash has performed other improved ceremonies (with every hard fork). To increase security, the Multi-Party Computing Protocol (MPC) has been extended to more people. The “Power of Tau Ceremony” as part of the sapling upgrade included around 90 different people who were affected by the SNARK public parameters. At this point at the latest, the ceremony should no longer be regarded as a weak point from our point of view.

Conclusion: Is ZCash worth an investment?

Although the ZEC price has fallen steadily since 2018, Zcash can be an interesting investment. The fall in the ZEC price should be seen in the context of the 2018 bear market and the Bitcoin dominance in 2019. From a purely technical point of view, Zcash has made significant progress during this time with both the Overwinter and the Sapling upgrade.

This allows shielded transactions to be sent in a few seconds with a fraction of the RAM previously required. This is another reason why ZCash, along with Monero and Dash, is one of the most popular privacy coins on the crypto market.

Despite the fact that Privacy Coin has a bad reputation in the mainstream media, Zcash, ahead of Monero and Dash, was listed on Gemini in May 2018 and on Coinbase in November 2018. As both platforms belong to the stricter cryptocurrency exchanges in the USA, Zcash (ZEC) received strong recognition as a result. The price reacted accordingly at the time. Nevertheless, a ban on anonymous crypt currencies has already been discussed in various countries around the world. Delistings might as well push the price down again.

On the other hand, following the example of Bitcoin, the next Zcash Halving could be a reason for a rising price of Zcash. Buying Zcash (click here to come to our tutorial!) is risky in any case, as with other cryptocurrencies.

A nice summary of what Zcash is and what it stands for can be found in the following Electric Coin Company video.