Sia is a distributed, blockchain-based cloud storage platform designed to compete with traditional cloud storage solutions from Microsoft, Amazon and Google. In line with the blockchain paradigm, Sia eliminates middlemen such as Microsoft and offers users the opportunity to exchange storage directly with each other via its peer-to-peer platform.

In practice, this means that anyone can rent or lease storage space. The Siacoin (SC), which must be used on the platform to handle the purchase process, serves as the means of payment.

The current price of SIA can be checked here. If you would like to track the price of Bitcoin, Ethereum or another 2,000 Altcoins, take a look at our course overview.

How does Sia work?

Originally conceived in October 2013 by founder and project manager David Vorick, the Sia platform ensures that each upload or stored file is broken up into 30 small parts (segments), encrypted and distributed to various hosts in the network. This distribution ensures that not a single host is a single point of failure.

This ensures that there is no total loss of data in the event of a failure. Availability and redundancy will also be strengthened. If one or more hosts in the network go offline, 10 of 30 segments are sufficient to completely restore the user’s data. The basis for this process is the Reed-Solomon erasure coding.

This is in stark contrast to traditional cloud storage solutions, which are centralized and where providers can access the data (after agreeing to the terms and conditions), for example to use the data for marketing purposes. Sia uses the Twofish algorithm for encryption.

Tenants of storage space conclude contracts with the hosts

The storage space tenants enter into contracts with the hosts. These contracts regulate prices, availability and other contractual obligations. The contracts are a kind of Smart Contract that create Cryptographic Service Level Agreements (SLAs) that are stored in the Sia block chain. Thus, the contracts can be automatically enforced by the network.

The payment is made by the tenant in advance, whereby a contract ends automatically after 90 days. In the event that one of the hosts storing a segment goes offline, Sia automatically moves the data to a new host called a File Repair.

At the end of the 90-day contract, the landlord of the storage facility is paid if he can prove that he has actually stored the data of the tenant (“storage proof”). If the memory certificate appears in the block chain within a certain period of time, the host is paid.

What is Siacoin (SC) for and what is Siafund (SF) for?

The Sia platform houses two tokens: Siacoin (SC) and Siafund (SF). As described, the Siacoin serves to pay the trade with the store. Another special feature compared to traditional cloud storage solutions is that the providers of the storage (the hosts) can set their own prices for leasing their free hard disk capacities. Thus, it is the sellers themselves who determine the price and not any third party supplier.

It is important to note that the total supply of Siacoins mined by proof-of-work is not limited. The Mining Reward will drop from an initial 300,000 to up to 30,000 Siacoins per block, which is estimated to happen in January 2023. However, it should be noted that Siacoin has no limited supply (such as Bitcoin, Ripple or Ethereum).

The second token of the network is the Siafund (SF). There are only 10,000 of them, with Nebulous, the company behind Sia, currently holding about 8,000 of them (as of October 2018). The remaining SF were issued in April 2018 as part of a Tokenized Security Offering (TSO) that met the strict rules of the SEC to raise funds for the development of the project.

Siafunds offer the holder the right to a refund of a storage contract fee on the Sia Network. As Sia writes on his webseite, “a fee of approx. 3.9% is charged on certain components of storage contracts, which is usually borne by the tenant. The host may be held responsible for the fee if the host does not stay online or does not provide proof of storage. This 3.9% fee will be spread across all 10,000 Siafunds, so the more the Sia network is used, the higher the returns for Siafund owners.” From May 2018, a Siafund is said to have been traded for around USD 8,000. Unfortunately there is no price tracker at the moment.

The advantages of Sia over Google, Amazon and Co.

Since Sia’s platform is obviously propagating the attack on established cloud storage solutions and companies, we believe it is worth taking another look at Sia’s advantages over Microsoft, Amazon and Google:

For the year 2019, Sia plans to approach the speeds of Amazon S3, among other things. In 2020, Sia is expected to become a true competitor of Amazon S3 and other traditional companies, so that commercial companies will also switch to Sia. 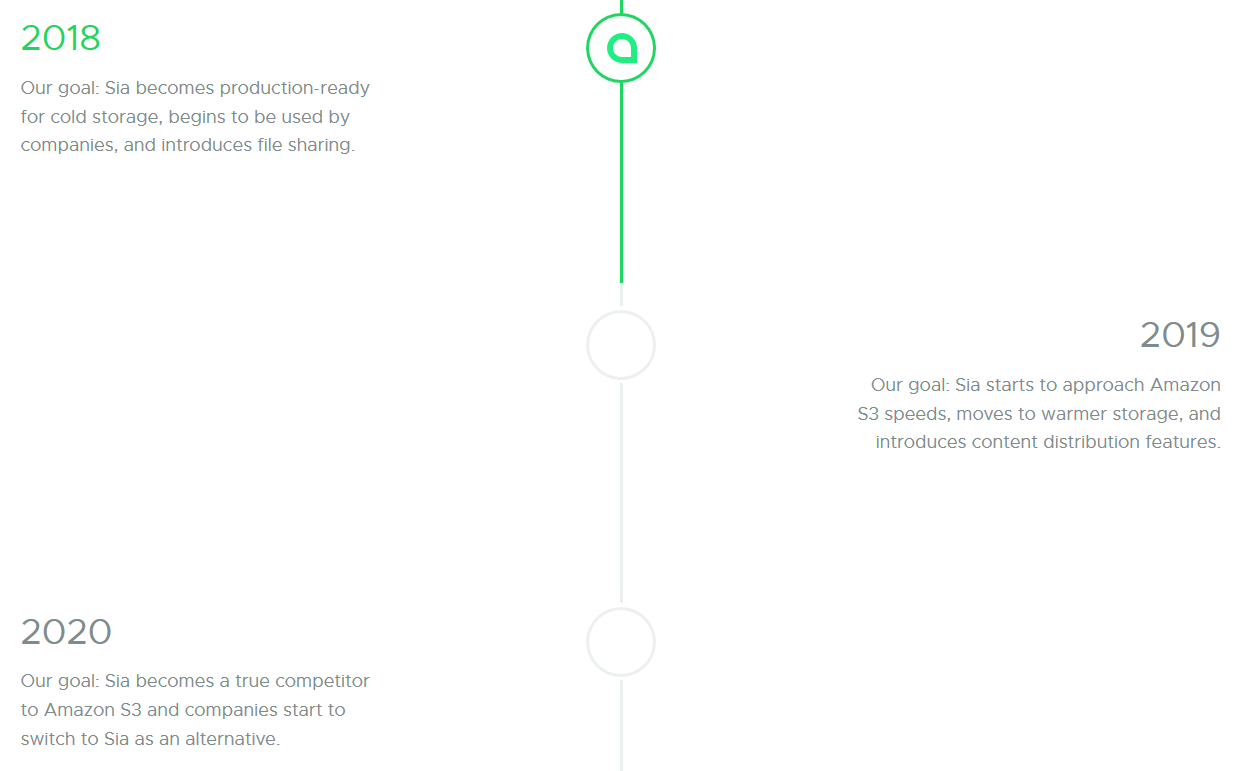 Bottom line: Is Siacoin worth an investment?

The global market for cloud storage is huge. With its platform, Sia delivers a product that has a real application case. From our point of view Sia is therefore definitely a project with great potential.

Whether the price of Siacoin (SC) will increase equivalent to the possible (huge) success of the project remains to be seen. From our point of view there is at least one question mark behind it, because the supply is unlimited and the price is therefore inflationary.