After the bearish mood on the cryptocurrency market has continued to grow in recent days, there is currently hope that a trend reversal will take place. In the past 24 hours, the Bitcoin price has fought its way from under 8,000 USD to over 8,300 USD. With the upward trend of Bitcoin also the altcoins have put down a small rally. Especially Ethereum and Chainlink show a strong momentum.

On Sunday evening, the Bitcoin price rose from 7,900 to over 8,300 US dollars temporarily. The rally was steady throughout the day and was also a bullish signal for the altcoins. As crypto-analyst Alistair Milne noted, Bitcoin has broken through its monthly downtrend, giving traders hope for a trend reversal.

Since the high of USD 13,800 in July 2019, the Bitcoin price has fallen several times below the USD 8,000 mark and thus by 43 percent. The last few days looked extremely bearish after the Bitcoin price repeatedly reached new lower highs. However, yesterday’s upswing sent BTC back to an important resistance level, as analyst Josh Rager explained.

However, as Rager noted, Bitcoin is still in a sideways trend. To confirm an uptrend, the BTC price must break through the resistance of USD 8,350 and reach a higher high:

BTC is still in this sideways range, nothing really has changed outside of short term bullish price action until we see higher highs.

Furthermore, there is still the threat of the much acclaimed “death cross” on the daily chart. This will occur when the 50-day moving average crosses below the 200-day moving average. Classically, a death cross is the confirmation and continuation of a downtrend. However, Bitcoin has proven the opposite in its recent past. When the “cross of death” was formed in April 2018, a bull run to the annual high was triggered. 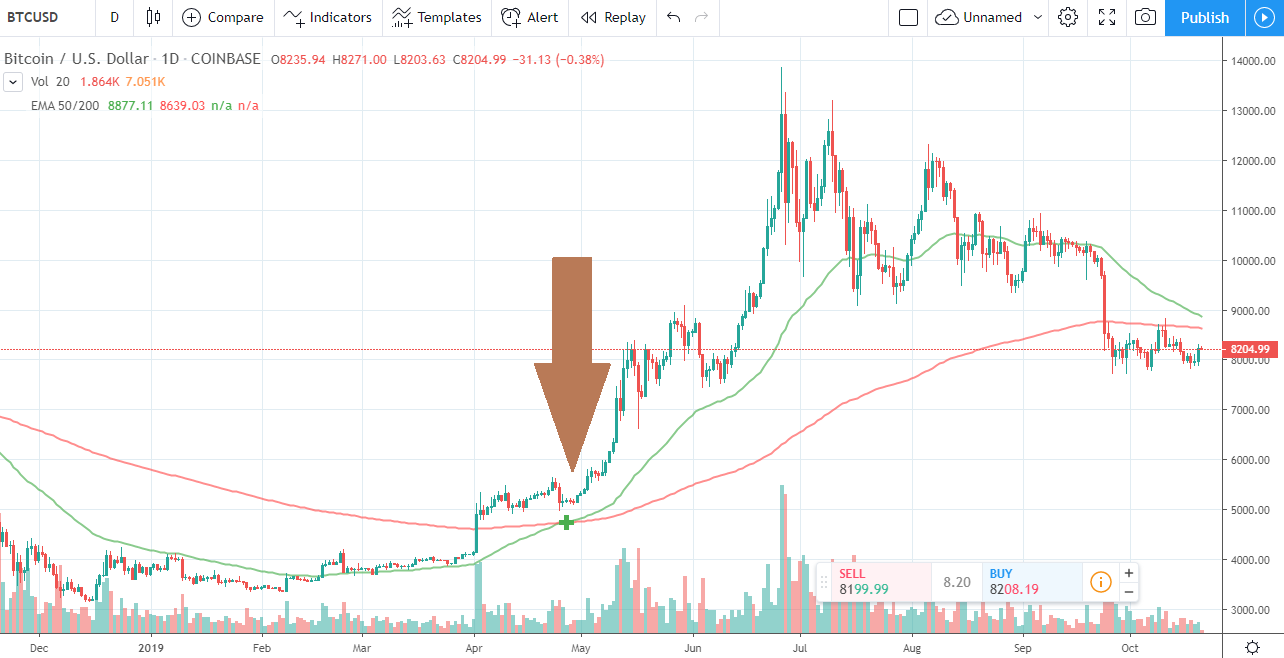 Ethereum and Chainlink on an upward trend

In particular, the rise of Ethereum (ETH) and Chainlink (LINK) confirm the upward trend of the last weeks, which was interrupted by the crash on the day of the disappointing launch of the Bakkt Bitcoin futures on September 24, 2019. Since then, Ethereum and Chainlink have seen a clear upward trend compared to Bitcoin and have increased their value against Bitcoin.

With regard to Ethereum, this trend can be seen with the forthcoming launch of ETH 2.0 in 2020 and the increasing popularity of decentralized financial applications (DeFi). Chainlink had recently made positive headlines when it became public that it is working with Intel, Hyperledger and the ETHAlliance to drive blockchain adoption in the enterprise sector.