Ripple and SBI founded SBI Ripple Asia back in 2016 to build a cross-border payment platform. SBI Holdings, which is part of the financial conglomerate SBI, announced on Friday that shareholders holding at least 100 shares will be eligible for a special reward.

The maximum amount of XRP shareholders can receive depends on the number of shares held and the holding period. All shareholders holding more than 1,000 shares for more than one year as of March 31 can receive 8,000 yen in XRP, equivalent to just under USD 73. 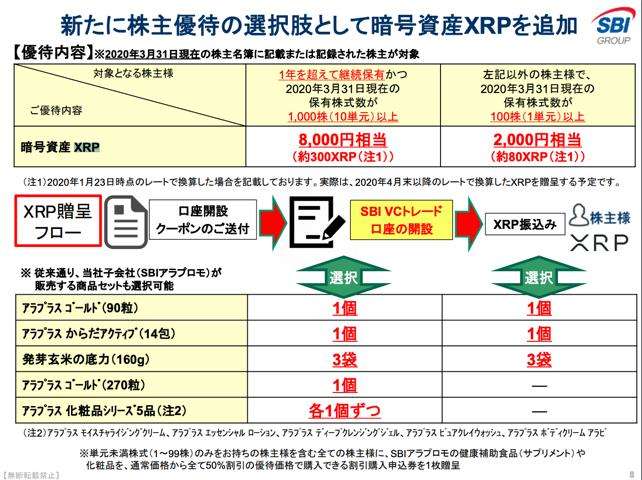 As an alternative to XRP, shareholders can also choose from a whole range of other services. These include high-quality vitamin tablets from Araplus and healthy foods from organic farming. The health products are worth more than the sum of XRP at the time of distribution.

Another Japanese company, Morning Star, in which the SBI Group holds a 48% stake, already paid XRP as a dividend to its shareholders in September. The price rose to USD 0.30 in September and October, but then fell back to the current XRP price of just under USD 0.24. A distribution of XRP with a long-term increase in value cannot be guaranteed.

Use cases such as this one continue to drive the popularity of XRP and its adaptation and represent important milestones in the further spread of cryptocurrencies worldwide.

As we reported earlier, on 30th January, Japan’s second largest bank, Sumitomo Mitsui, announced an investment in the Ripple-based application MoneyTap. MoneyTap is an application developed by Ripple and SBI Holding. Using distributed ledger technology, MoneyTap enables its users to send money using a QR code generated by their phone.

SBI Holdings also announced yesterday an investment in OpenLegacy, a software development company. The company is researching and selling software that links an API that can be used to perform micro-services such as transaction processing. SBI states that by using OpenLegacy, a simple connection can be provided with the MoneyTap API:

As the SBI Group actively engages in regional revitalization, it encourages the use of its API platform, which facilitates digitization of regional banks, and will revitalize regional banks.

In addition, XRPLabs is about to launch a banking application called Xumm, which will make online banking obsolete in the long run. Xumm relies on Ripple’s native token, XRP, to send and receive transactions. The exact launch date has not yet been announced.

Ripple is planning to make an Initial Public Offering and thus go public. In addition, the transaction volume is expected to increase further, as the figures of the last quarterly analysis show. At the time of writing, XRP is following the current market trend and is moving sideways (+ 0.09 %) to a price of USD 0.2403.