For Ethereum (ETH), 2020 promises to be a very interesting year. With the launch of Ethereum 2.0, also known as Serenity, five years after the launch of the smart contract block chain, a phase is about to begin in which the promises of a scalable blockchain could become reality. As Ethereum’s core developers recently announced in an AMA on Reddit, the launch of phase 0 will be at 95% in 2020.

ETH researcher Justin Drake confirmed in the AMA that the ETH core developers favour 30 July 2020 as the launch date, the fifth anniversary of the project. With the completion of the formal verification (VF) of the bytecode of the deposit smart contracts, an important step has been taken.

Although phase 0 will mainly run in the background for Ethereum’s users, this phase will lay important foundations for the Ethereum “world computer”. The basic functionalities for the Beacon Chain, the validators and the coordination of shards will be provided. Phase 1, which will also follow in 2020 or 2021, will provide all functionalities for Sharding.

Will Ethereum 2.0 trigger a hype?

With the transition to Ethereum 2.0, a hype could arise that will make Ether (ETH) one of the best investments in 2020, as some experts speculate. Obviously also in connection with the bullish mood on the crypto market, the Ethereum price has risen by over 90 percent in the last 53 days, from 116 dollars to 220 US dollars. This is also reflected in the strong fundamentals of Ethereum.

For example, Ethereum broke out of the multi-year resistance range at $210 and overcame a significant area of trading interest much faster than Bitcoin. This may also have triggered fears among investors of missing something (FOMO) and spurred demand for Ethereum. Another reason could again be the poor price development since 2017. Ethereum is still a long way off its all-time high of over $1,400 and is still 84 percent below that level, which could signal great potential for investors. 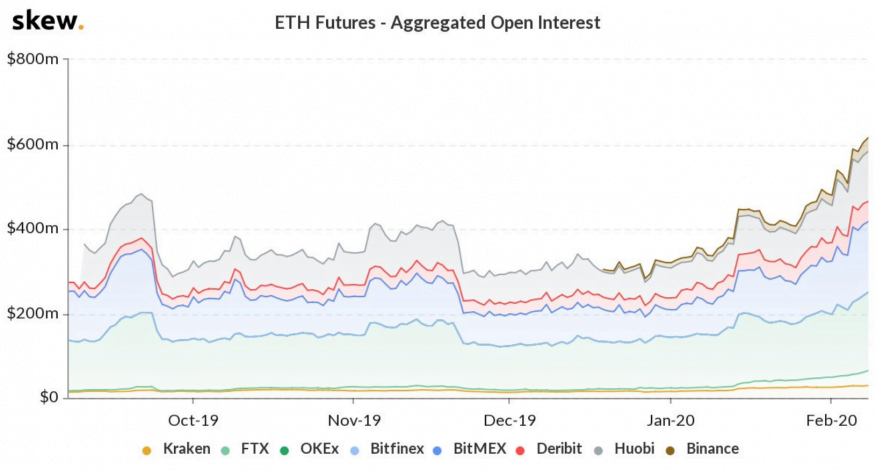 Not only the open interest, but also the daily aggregated trading volume of ETH futures is approaching the highs of October 2019 and mid-January 2020. 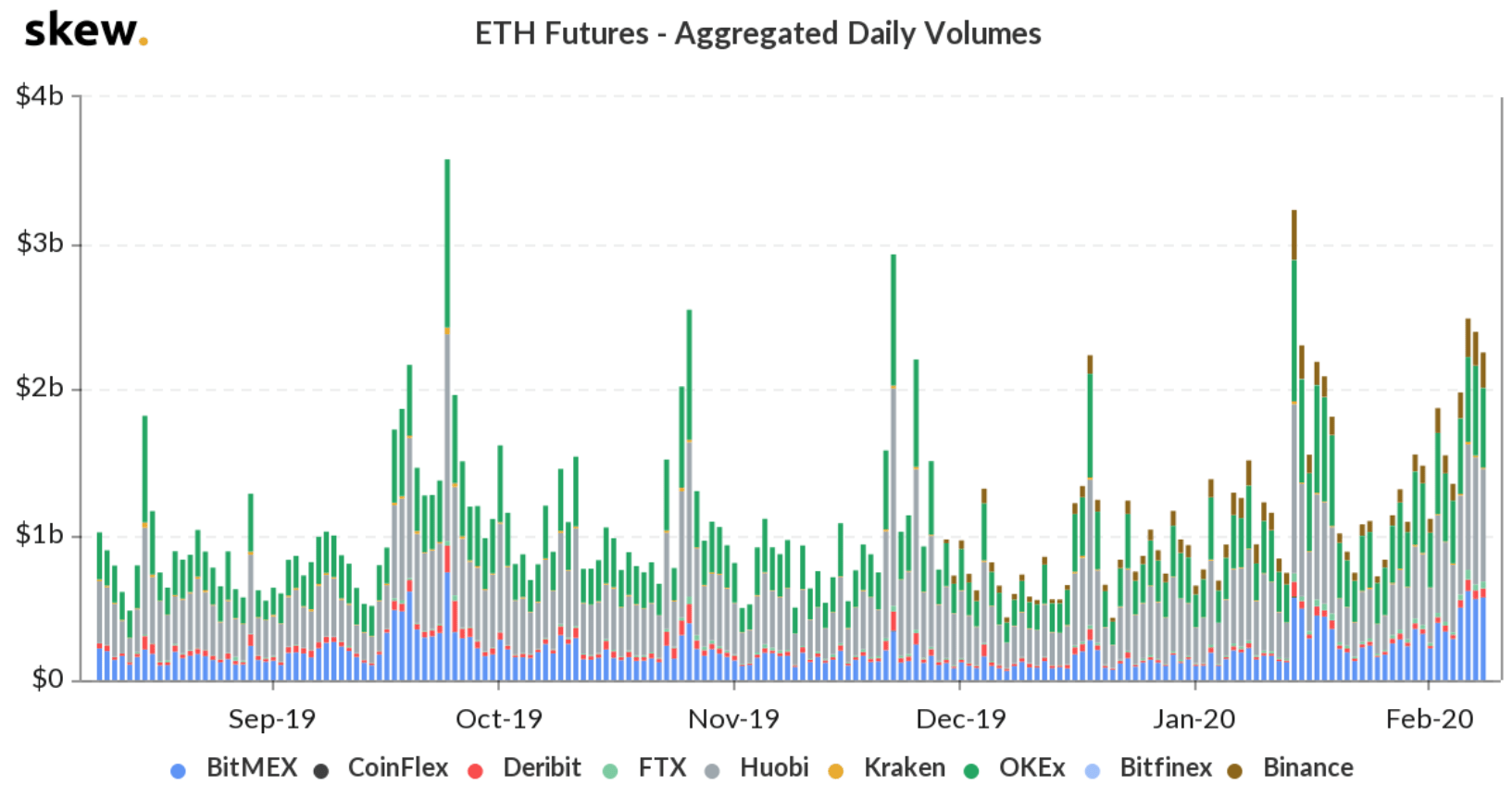 As Skew also noted, traders expect increased volatility of ETH compared to Bitcoin. The implied volatility range is at a six-month high. 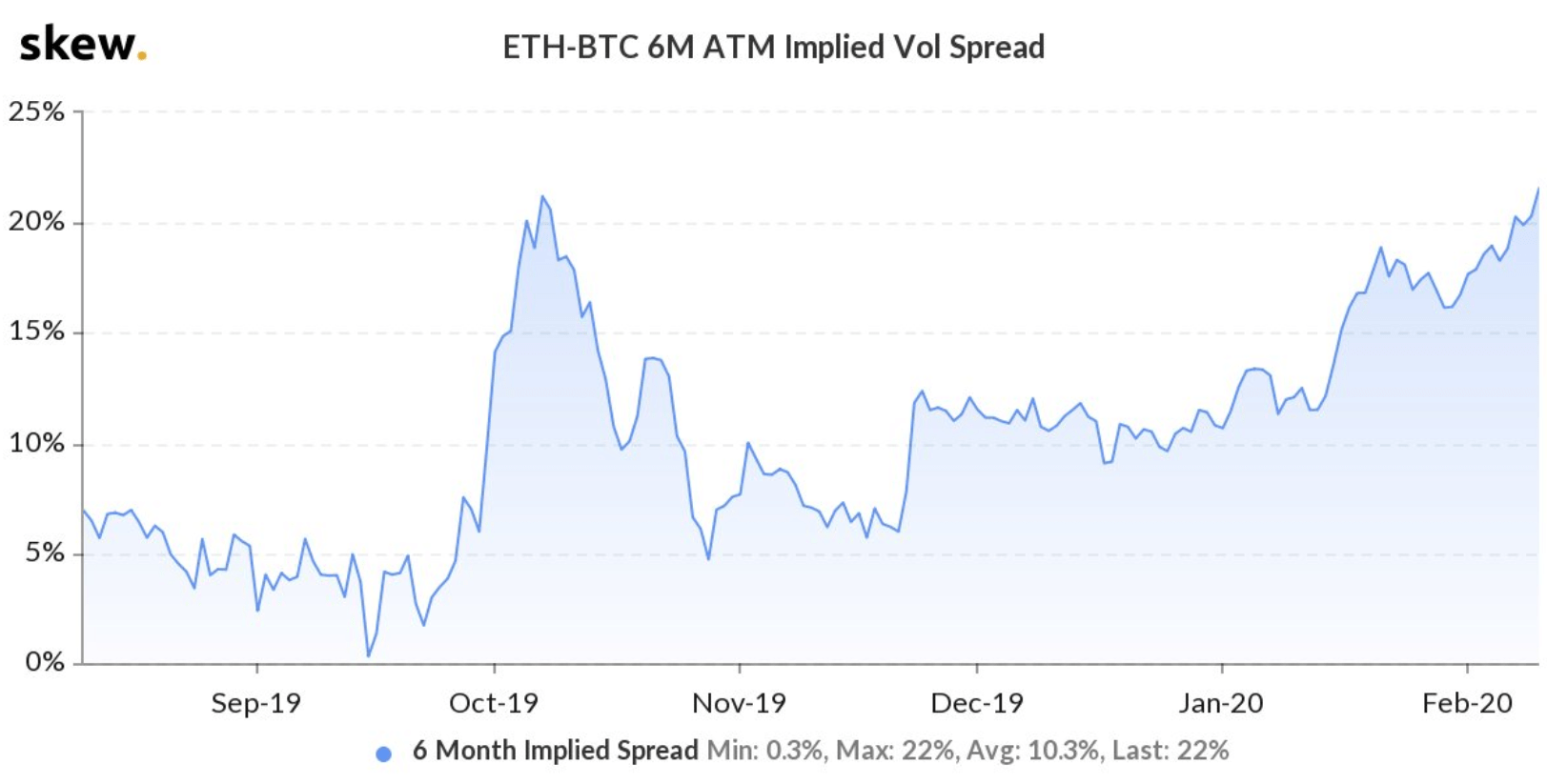 Another important factor for an ETH rally could be the continuing explosion of interest in decentralized finance (DeFi) applications. A few days ago, the total amount locked up in DeFi applications exceeded $1 billion. As a result of the positive fundamental data for Ethereum, ETH Miner also seems more bullish than ever, as Maksim Balashevich, the founder of the on-chain data provider Santiment explained in a blog post:

Across the entire Ethereum miner ecosystem, the last three months were marked by stable and undisrupted accumulation.

As Balashevich describes, all ETH mining pools currently accumulate around 1.69 million ethers, which is close to an all-time high. The current accumulation period leads Balashevich to the assumption that there is a high level of confidence in the project among the majority of miners, at least compared to current market conditions.

Nik Patel, a popular crypto analyst, recently noted that the current momentum could extend until Ethereum reaches the next major resistance level at $360. Patel explained that $230 is an earlier support level for the cryptocurrency, which has now become a resistance.

Over the past couple of weeks, price has also closed strongly back above the 200MA and 360MA and is now at prior support turned resistance ~$230. I could see Ethereum taking a breather here, if only to retest trendline support and the double top at $200 as new support.

If Ethereum is able to break through the slight resistance it currently faces at 230, it is very likely that ETH will continue to climb to $360, according to Patel:

The reversal from here has been phenomenal, with Ethereum doubling in price since. Price has also broken out above trendline resistance from the June 2019 high and looks set to close the Weekly above both the $200 and $225 swing-highs, turning market structure bullish and opening up a move to retest $360.

At the time of writing, ETH is trading at around USD 219 and has undergone a small correction in the last few hours, as well as the entire crypto market.

Crypto News Flash does not endorse and is not responsible for or liable for any content, accuracy, quality, advertising, products, or other materials on this page. Readers should do their own research before taking any actions related to cryptocurrencies. Crypto News Flash is not responsible, directly or indirectly, for any damage or loss caused or alleged to be caused by or in connection with the use of or reliance on any content, goods, or services mentioned.
ETH ETH2 Ethereum
Previous ArticleBitcoin Flash Crash: BTC falls by 300 USD in a few seconds and fills futures gap
Next Article Japan to issue CBDC to challenge Digital Yuan and Ripple