John McAfee is one of the most controversial personalities in the cryptocurrency space. The former anti-virus software developer and U.S. presidential candidate for 2020 has caused quite a stir in the past with his comments on Bitcoin and various altcoins. But his Bitcoin price forecasts have certainly caused the biggest stir.

McAfee first announced in July 2017 that one Bitcoin (BTC) would be worth $500,000 by the end of 2020. In the Tweet at the time, he claimed that it was “mathematically impossible” for a BTC to be worth less by the end of 2020. Following Bitcoin’s bull run at the end of 2017, when Bitcoin rose to its current all-time high of $20,000, McAfee even raised his price prediction to $1 million for one Bitcoin.

Despite the following bear market, he reaffirmed his statement in 2018 and stuck to his statement. In an interview with Jessica Walker of the AIBCsummit, the cyber security guru doubled his price forecast once again to $2 million for a Bitcoin by the end of 2020.

Run the f***ing numbers. If Bitcoin is less than $2 million by the end of 2020, then mathematics itself is a flawed disappointment.

For his price forecasts, McAfee repeatedly cites Bitcoin’s limited overall supply and the advantages of Bitcoin over fiat currencies. In a Forbes interview on September 30, 2019, he emphasized his price forecast of one million by pointing out the scarcity of BTC. He argued that the limited supply and rising demand for Bitcoin will inevitably lead to a price increase under the law of scarcity in economics, as mining will not bring enough BTC to the market to meet demand:

Let’s get real, there are only 21 million Bitcoins. Seven million of which have been lost forever, and then, if Satoshi [Bitcoin’s anonymous creator] is dead, add a few more million.

McAfee also pointed out in the Forbes interview that Bitcoin would only need to account for 5% of global financial transactions to meet his prediction:

In any case, just run some numbers. If bitcoin gets to be 5% of world financial transactions, which, you all know it will, maybe 10% or 20% then Bitcoin would be worth $10 million per coin, based on those numbers.

Is a Bitcoin price of 2 million USD possible?

A website has looked at John McAfee’s Bitcoin price forecast and calculated that the Bitcoin price must rise at a rate of 0.484095526% per day with linear growth by 31.12.2020 to reach $1,000,000,000.00 USD. The red line in the graph shows the current level at which the price should be in order to meet this prediction. However, the website has not yet raised the price forecast to USD 2 million per Bitcoin. 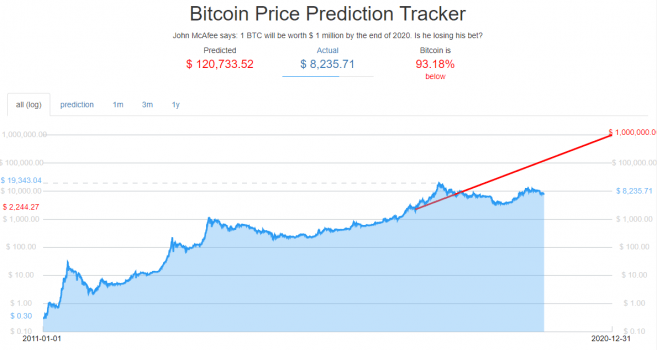 Although linear growth at Bitcoin is unlikely, as the price is dominated by strong and sudden ups and downs, the forecast currently seems very unlikely. This would require a complete collapse of the fiat financial system and a rapid global introduction of cryptocurrencies.

A comparatively moderate price forecast was provided a few weeks ago by the major German bank BayernLB, which valued Bitcoin on the basis of its stock-to-flow ratio. As a result of the study, the renowned bank stated that Bitcoin could advance into the USD 90,000 region with the next Bitcoin halving in May 2020.

Currently, the Bitcoin price is in a slight upward trend again over the past 24 hours. After the price fell below the 8,000 USD mark on Friday, the BTC price fought its way back above 8,200 USD at the time of writing.