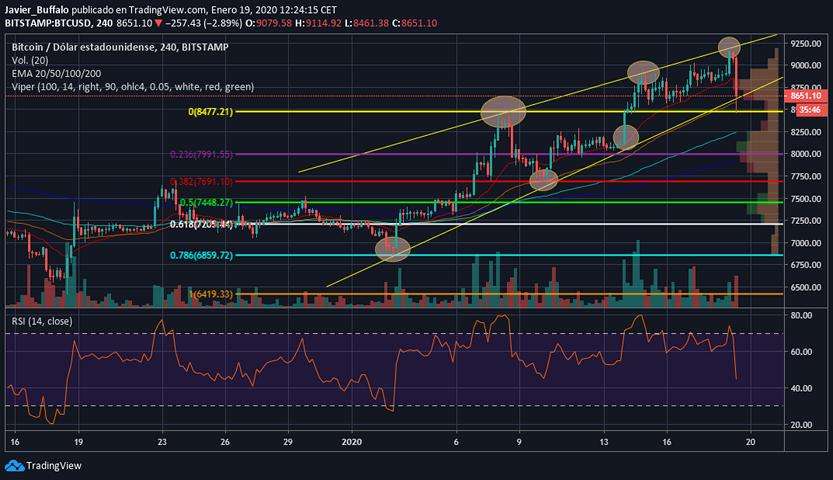 In the 4-hour chart we can see the formation of an ascending wedge, the break of which is usually downward, motivated by the exhaustion of the buyers. This is exactly the scenario that has occurred.

At the support points in the chart, we can see a good buying impulse in the volume profile each time the price touches the upward direction of the wedge. However, the RSI remained in the over-bought territory for a long time. The bears slowly noticed the weakness of the buyers and managed to shake the Bitcoin price with a significant jump on this last candle.

At the moment the price is struggling to keep up with the rising wedge support, so it will be crucial for the candle to close above $8,600 in the next few hours.

Previously, the price had dropped to the 38.2% Fibonacci retracement level ($7,700), so the 1.382% extension was the target to reach ($9,200), a range in which we found strong resistance and bearish pressure, as expected.

It would be much more positive if the price managed to stay above the 20-period exponential moving average ($8,800). All in all, the bulls are showing the first signs of fatigue and Bitcoin should break the resistance of $9,200 with strong volume in order to break the rising wedge pattern and continue the rally. However, a bearish wedge break ($8,600) could mean a reversal of the trend.

Experts are divided and urge caution

With the jump over the USD 9,050 mark, Bitcoin reached a high for several months. CryptoDude stated in a new tweet before the sell-off that USD 9,080 is a critical level. He explained that if Bitcoin manages to stay above this key resistance on the weekly chart, a macro reversal could occur. This opportunity seems to have been missed with the sell-off.

$BTC Critical level at higher TFs, will try my chances with a short if it closes below this range at 4H – bulls have held it well so far with 2 touches yet no break therefore I'm not confident enough in getting in a position now.

Flat, caution for bulls if they lose support. pic.twitter.com/Bs7YNf0HgT

The Bitcoin Trader CryptoBirb also noted that the recent rise allowed BTC to break over a flat channel in which BTC has been trading for over a week. The low is USD 8,555 and the high is USD 9,000. Before the unexpected sell-off, he also expected Bitcoin to continue to rise until the next resistance level of $9,400.

Prepared another $btc map for ya? pic.twitter.com/t1GxLSafdQ

The sudden drop in prices has surprised many traders. It remains to be seen how things will continue for BTC.