Binance Research, the research department of the popular cryptocurrency exchange Binance, has published a detailed analysis of the Telegram blockchain. In the survey, Binance examines in detail whether the Telegram Open Network (TON) meets the high expectations and can become the “first blockchain of the 5th generation”.

The expectations and the hype around the Telegram blockchain are huge. This alone can be seen in the amount of money Telegram was able to raise from investors in the two rounds of non-public funding. In early 2018, the Telegram Open Network (TON) secured USD 1.7 billion in funding from private investors. However, this capital is tied to an important deadline.

Right at the beginning of the report, Binance Research notes that the first TON tokens, Gram, must be issued by October 31, 2019. This date is particularly important because Telegram has committed itself to this date. If this deadline is not met, the capital received will be returned to the investors.

As described in detail in the study, the current state of development is not known in detail. According to Binance Research, it remains to be seen whether TON can start on time and

if so, TON will open a new era of blockchains capable of supporting thousands of dApps on a true backend technology

What benefits can the Telegram Blockchain provide?

According to Binance Research, the launch of the Telegram Open Network marks the start of the 5th generation of blockchains with features such as dynamic sharding, tight coupling for blockchain interoperability and multichain networks. In addition, according to the 524-page white paper, TON will come with a Byzantine fault-tolerant Proof of Stake (BFT PoS) consensus mechanism that, in combination with Sharding, will support “millions of transactions per second”.

In total, the TON ecosystem will consist of eight additional components beyond the blockchain. Besides this, the Telegram ecosystem will provide a state channel platform, a domain name system (DNS), a proxy to hide IP addresses of users and nodes, a peer-to-peer network, a distributed database to store information, an interface for external integration of TON and many additional services. Binance Research has compiled the following overview: 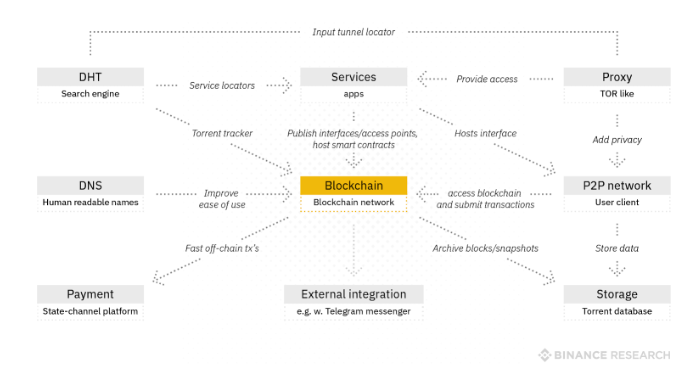 The technology behind TON

Apart from the information from the various whitepapers, not much is known about the technical implementation of TON beyond theory. The source code for the TON blockchain was released on September 07, 2019. Apart from that, only whitepapers are available to the public. Based on the data collected by Binance Research, at least thirteen other programmers are working on TON in addition to the two Telegram brothers Nikolay and Pavel Durov.

This very unusual strategic decision, in turn, violates against the first rule of cryptography, which strongly recommends to “never roll your own crypto”. While this principle is probably taught in every introductory lesson to cryptography and generally considered best practice. […] So far, Telegram has not been subject to any real security leaks, there are, however, already several identified theoretical weaknesses and potential attack vectors.

Like most blockchains, the Telegram Open Network will have a virtual machine that supports Telegram Virtual Machine, which is used by the nodes and allows the execution of smart contracts. The Smart Contract language is Fift, which is compiled in bytecode and executed on the TVM. The report also takes a very critical view of this:

Being a mixture of an interpreter and a compiler, Fift is some hybrid language, which most likely does not require a lot of hardware support. Curiously, Fift uses a special notation (i.e., Reverse Polish notation) that is not widely used by many programmers.

Integration of Gram into the Telegram Messenger

As Telegram has announced several times in the past, the Telegram Messenger will be integrated into TON. As Telegram has an estimated user base of about 500 million users, this TON could immediately become one of the largest blockchains. Binance Research explains:

Telegram-TON integration will provide a clear path to cryptocurrencies for millions of people. Telegram Messenger will not only serve as an example of the possibilities offered by integrating with TON, but will also add unique features to the TON platform, leveraging Telegram’s massive user base and developed ecosystem.

Unlike Facebook’s Libra, TON’s Gram will be a utility token that is subject to price volatility and therefore offers an investment potential.

The report concludes by stating that there is still a lot of open question on TON:

If successful, however, according to Binance Research, the Telegram Open Network will bring significant progress to the blockchain industry. Regardless of any concerns, Telegram will have something no other crypto project has to date to the extent that Telegram has: Users. Once TON implements the Telegram Messenger, Telegram users will be able to use the Gram Token, possibly making TON the largest blockchain.

If you have further interest in the Telegram Open Network, we recommend reading the full report by Binance Research, which still has a lot of information available that could not be considered in this brief summary.