The launch of the Incentivized Shelley test network was a complete success. As CNF reported, in the first hours after the launch, 17 percent of all ADAs in the test network were already staked. According to Input Output Hong Kong (IOHK) CEO Charles Hoskinson in a recent AMA, over 500 stakepools have already been registered. This is half of what Cardano wants to achieve in the long term.

However, Hoskinson emphasized in the last AMA’s that not everything is yet going according to plan. Just before Christmas an update was released, which brought several improvements. One problem, which could not be solved yet, is the saturation of the stakepools.

As IOHK explained in a tweet in mid-December, the saturation of a stakepools is defined as 1 percent of the total network participation. To prevent a single stakepool from becoming too large, IOHK had set the ‘k’ parameter to 100 in mid-December. However, the measure had no real effect, as the data from adapools.org shows. At the time of writing (6 January, 9:40 UTC), the 13 largest stakepools were saturated. At the time of writing, 33 percent of all staked ADAs were assigned to the top 20 stakepools. 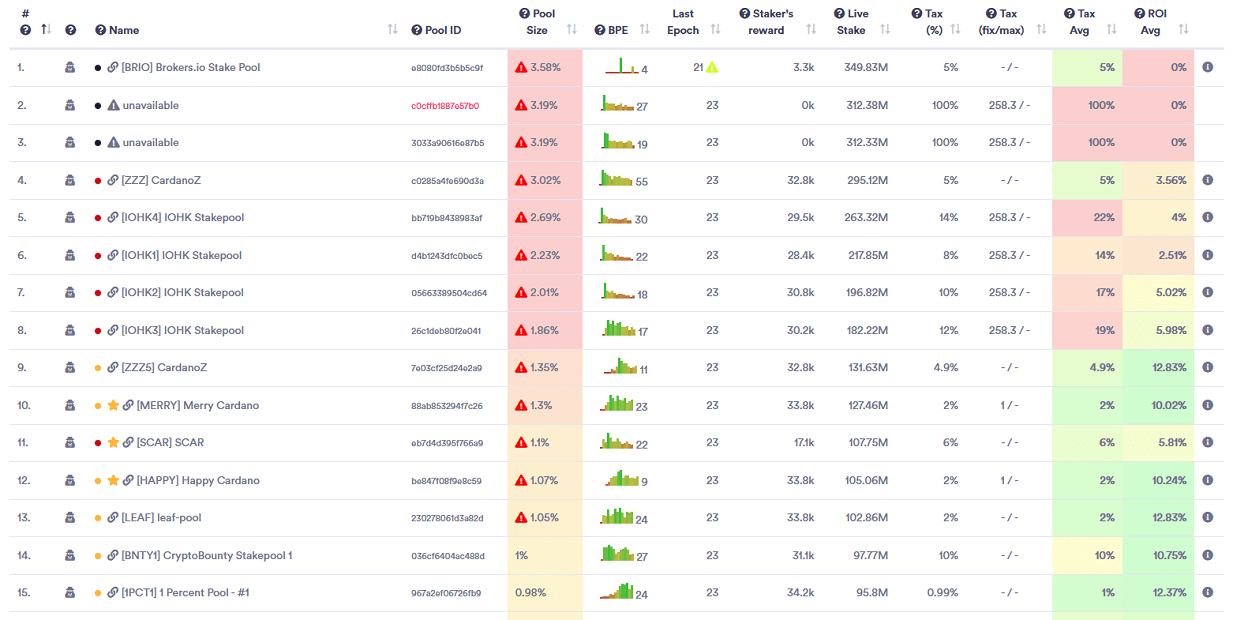 The saturation of the stakepools is important for two reasons. On the one hand, the network tends to centralise when too many ADA holders choose the same stakepool. On the other hand, saturation also affects the users’ stack rewards. The rewards must be shared with more people, which makes the stakepool less attractive.

As the adapools.org graphic shows, the stake reward can be well over 12 percent in unsaturated pools. In contrast, the reward in oversaturated pools is well below 5 percent.

Is this a specific problem with the Cardano staking?

Of the 248 listed stakepools on adapools.org, 178 are active. So it would be mathematically possible that no stakepool is overcrowded. The question is therefore why people give their ADA to stakepools that are oversaturated and accept a low return. Surprisingly, many pools that offer high rewards are not particularly crowded.

However, the problem is not specific to Cardano. Other blockchains that use a similar staking system also have the problem. Official pools run by the developers of the cryptocurrency, such as IOHK and other Cardano ambassadors, seem to enjoy a higher level of trust. Another problem is also the inertia of the users. As the data from adapools.org shows, about 8 percent of staked ADA is delegated to pools that did not produce blocks in the last epoch.

The problem of trust is probably being exacerbated at the moment, as the Shelley test network is still in the initial and testing phase. The user p-alik explained symptomatically:

I wouldn’t put my few ADA’s in any of them yet.

All of appear untrustworthy to me right now.

3. No reference to their code.

I do want to caution new users here that there are no “official” stakepools at this time. None of these pools are registered with Cardano or IOHK and some of these may ultimately not make the cut or pan out for whatever reason […] There are a lot of details and criteria that is still up in the air and everyone is waiting for more information on what is required to run a staking pool.

Finally, there are still some changes to staking that need to be made, for example, to combat people’s inertia. Incentives could be created to encourage movement between pools. Other requirements of the community are saturation warnings and automatic stakepool switching. The latter proposal in particular could make staking much easier.