Bocknative, a San Francisco-based start-up, examined the transaction volume of the 24 largest public blockchain networks based on transaction volume. The company concluded that in the period from 2009, with the launch of Bitcoin blockchain, to 2019, over 3.1 billion transactions were transferred through the largest networks. 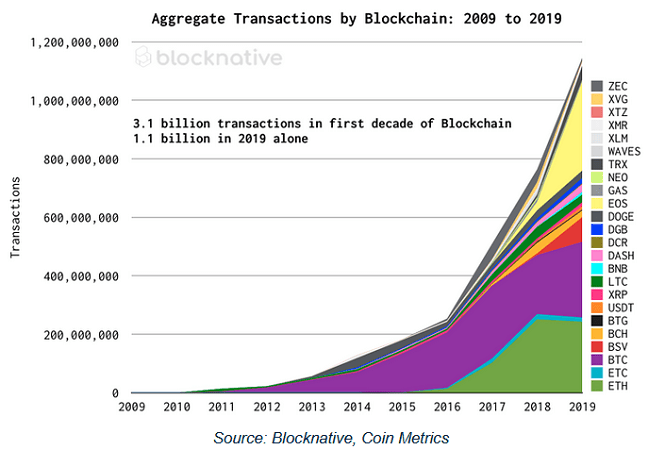 As the Bocknative team writes, this may be the first census of its kind:

Using this data as the foundation for our modeling, and validating our approach and assumptions with the team at Coin Metrics, we built what could be the ecosystem’s first census of every public blockchain transaction since the dawn of the Bitcoin genesis block.

The company also found that a total value of $4.6 trillion was sent over 10 years, with the years 2017 to 2019 accounting for approximately 96 percent of the total value. In 2019, the threshold of one billion aggregated transactions was exceeded. In fact, more than 37 percent (>1.1 billion) of all blockchain transactions in history were executed in 2019. The growth trend is encouraging, as Bocknative noted. With the simple assumption that current trends continue unchanged, this suggests that the industry can expect nearly 20 billion new blockchain transactions over the course of the next 5 years.

In addition, the team expects Bitcoin and Ethereum to exceed the threshold of one billion transactions per year in 2023, although this forecast is by no means necessarily true:

I recommend taking this forecast with a big grain of salt, as our future probably will not follow any linear growth projection – not to mention practical limitations such as block size. […]

And, as we saw at ETHDenver 2020, next-generation techniques are being actively explored by builders. And these approaches have the potential to enable net new categories of transactions that could not exist without blockchain. We believe that these are the sorts of non-linear innovations that can propel our industry past 1 Billion Transactions well before 2023.

However, it must also be noted that these figures fall far short of those of the traditional banking system. The payment giant VISA recorded a payment volume of 8.8 trillion US dollars for the last 12 months alone (until 30 September 2019).

Crypto News Flash does not endorse and is not responsible for or liable for any content, accuracy, quality, advertising, products, or other materials on this page. Readers should do their own research before taking any actions related to cryptocurrencies. Crypto News Flash is not responsible, directly or indirectly, for any damage or loss caused or alleged to be caused by or in connection with the use of or reliance on any content, goods, or services mentioned.
Bitcoin Dash Dogecoin EOS Ethereum Litecoin Monero Ripple Tron
Previous ArticleIncognito lets you swap Bitcoin and Ethereum anonymously for Monero, Dash or Zcash
Next Article Is the first Bitcoin ETF in history coming on February 26?