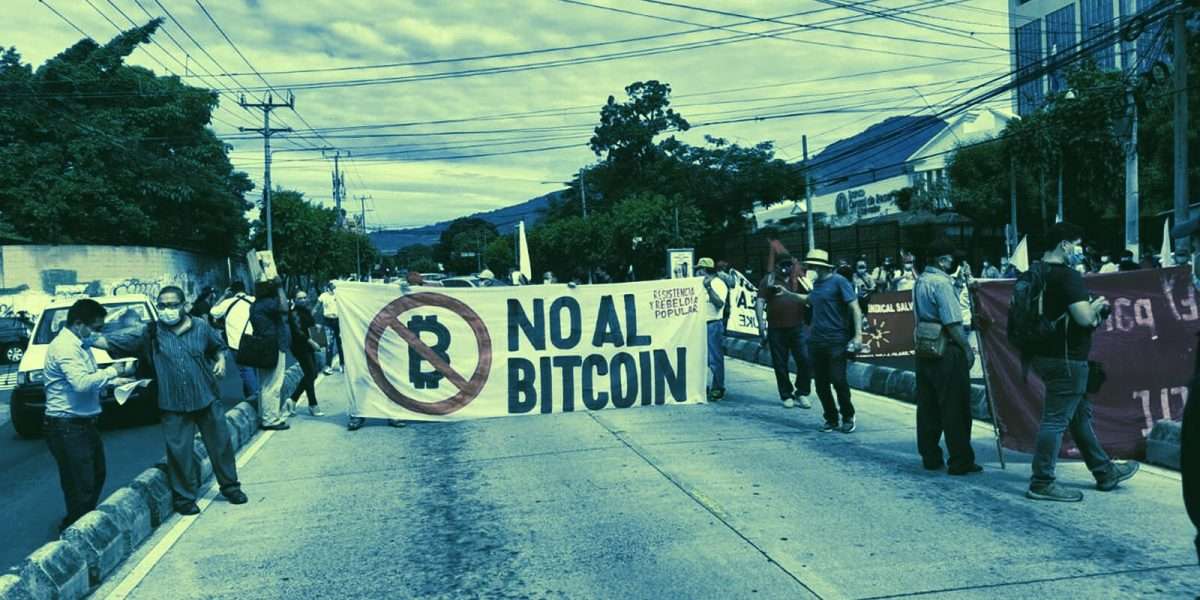 In a surprising turn of events last Friday, August 28, some El Salvadorans protested on the streets about the legal adoption of Bitcoin. This also comes a few days before El Salvador legally adopt the Bitcoin law.

This new Bitcoin law will make BTC an official legal currency of El Salvador along with the USD. While El Salvador President Nayib has been going all bullish on Bitcoin adoption, the same sentiment doesn’t seem to reflect among all citizens.

Last week, hundreds of demonstrators including veterans, workers, and pensioners, marched through the capital city. With “No to Bitcoin” banners, several also voiced their concerns over the use of BTC. A large majority also expressed dissent in the plan to receive pension and welfare payments in Bitcoin, in the future.

The protestors rallied holding signs of “Bukele we don’t want bitcoin” and “No to corrupt money laundering”. Speaking to Reuters, Stanley Quinteros, a member of the Supreme Court of Justice’s workers’ union said:

We know this coin fluctuates drastically. Its value changes from one second to another and we will have no control over it.

One of the major reasons behind El Salvador’s Bitcoin adoption is cutting down on cross-border remittance costs. Interestingly, other Central American countries have pinned their hopes on El Salvador’s BTC move.

Everyone is watching if it goes well for El Salvador and if, for example, the cost of remittances drops substantially … other countries will probably seek that advantage and adopt it.

He further referred to the country’s decision as an “out of this world” move. In El Salvador, a large majority of the people rely on money sent home from relatives in the U.S. Thus, it looks strange calling Bitcoin BTC adoption a move of financial inclusion just at a time when locals lack access to credit cards and bank accounts.

CABEI is offering El Salvador the technical assistance required to implement Bitcoin adoption. However, the world Bank had outrightly rejected providing any such assistance. “Guatemala, Honduras and El Salvador are the countries that would have the most to gain if the adoption of bitcoin lowered the cost of sending remittances,” said Mossi.

Last Saturday, August 29, the International Monetary Fund (IMF) tweeted about digital assets. The IMF hasn’t been keen on getting Bitcoin into the mainstream financial sector.

Privately issued cryptoassets like Bitcoin come with substantial risks. Making them equivalent to a national currency is an inadvisable shortcut. Read more in our #IMFBlog by the IMF’s Tobias Adrian and @RhodaWeeksBrown: https://t.co/r1NwBuyAq8 pic.twitter.com/Sk9tOjvhD6

IMF referenced its last month’s blog mentioning how a volatile asset class like Bitcoin could bring risks to financial stability. One of the concerns, the IMF mentioned was that “monetary policy would lose bite,” since “Central banks cannot set interest rates on a foreign currency.”