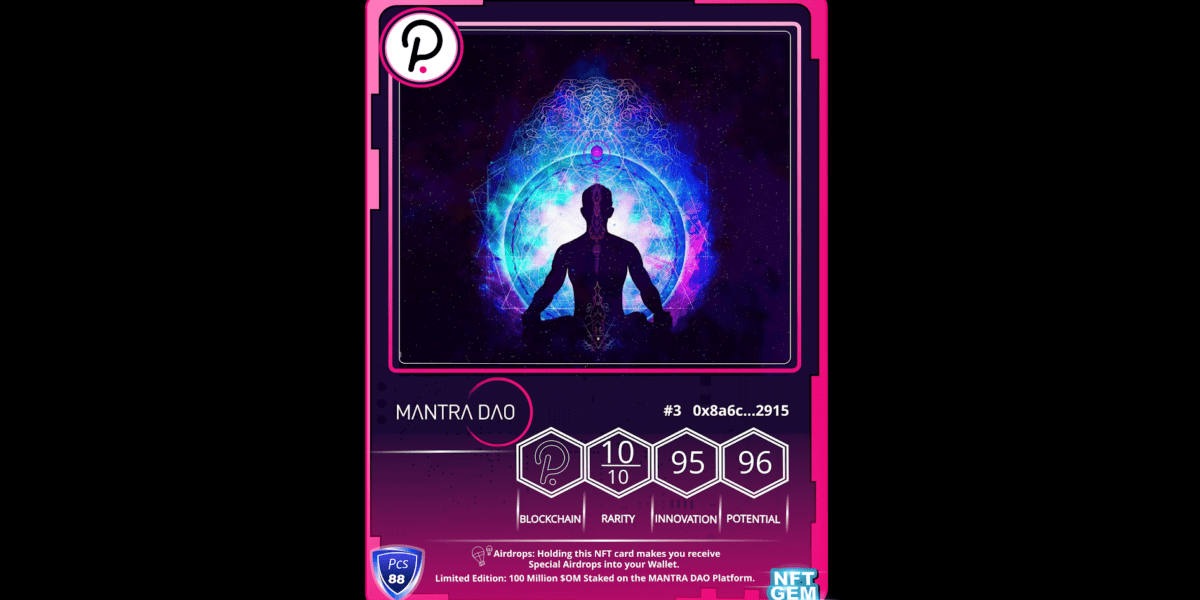 Defi staking platform MANTRA DAO has completed its latest public sale – but this one was significantly smaller than the event that saw its OM token issued to the defi community. On December 7, the project revealed that the 88 limited edition NFTs it had commissioned had all been purchased, with the entire sale taking just 30 minutes.

Buyers were keen to get their hands on the non-fungible tokens on account of the rights they provide to future airdrops. This could see each card become a yield-bearing asset, should the airdropped tokens gain monetary value. Although MANTRA DAO’s fast-selling NFT program was a mere dalliance rather than a pivot, it nevertheless bolsters the digital scarcity narrative and suggests that the NFT market has a lot more room to grow.

Amazing to see our first #NFT sell out so quick! Many thanks for the support🙏

A big congrats to all the MANTRA NFT #AirDrop holders🎉🥳

The first use of proceeds that support Sherpa initiatives will follow soon!🕉

Sherpas bid for gems in the wild

MANTRA DAO community members, known as Sherpas, wasted no time in acquiring all 88 of the NFTs the project placed on sale. The artwork that adorns them was created by ‘NFT GEM’ whose work regularly graces Rarible’s marketplace. The artist creates static and animated works, including ‘Artificial Consciousness,’ a mesmeric piece featuring a forest of fingers radiating out from a female face, like a coral reef. The card that NFT GEM created for MANTRA DAO was less flamboyant but equally stylish, with a theme of intergalactic mysticism and a Polkadot logo neatly appended.

Digital collectibles are a major growth area, and lie at the intersection of crypto and entertainment. The NBA’s Top Shot marketplace allows b-ball fans to get their hands on rare collectibles depicting iconic in-game moments, while Terra Virtua has gone a step further, engineering an entire virtual world for displaying and interacting with digital collectibles. Inside the Terra Virtua Fancave and Dome, collectibles can be brought to life using augmented reality.

While the auction of 88 NFTs spread some fun around the MANTRA DAO community, its team is now focused on launching v2 of its OM token, which currently exists as an ERC20. When v2 of the token is introduced, it will be compatible with Polkadot, on whose infrastructure MANTRA is built, courtesy of RioChain. At the same time as it introduces OM v2, MANTRA DAO will add Compound integration, a mobile app, and enhanced staking and lending. It will also open a MANTRA pool where tokens can be staked, complete with an auto-compounding function to boost rewards.

Set to launch before the end of the month, the upgraded MANTRA DAO platform will provide the first true taste of the defi experience Polkadot has to offer. Projects such as MANTRA DAO, RioChain, Acala, and Polkastarter are recreating fundamental defi tools on Polkadot’s scalable and interoperable Substrate framework. Polkastarter’s cross-chain DEX will soon support cross-chain swaps of many of the same assets that can be staked on the MANTRA DAO platform in the near future.