The American crypto exchange Kraken has published a new report according to which whales are increasingly hoarding Bitcoin. According to the data collected by Kraken, HODLers have woken up from crypto-winter sleep and are now in a wait and see attitude. As soon as they abandon their waiting attitude, there could be a massive bull market.

The Kraken report states that the number of addresses with between 1,000 and 10,000 BTC, which Kraken define as “whales”, has increased significantly in the second half of January 2019. The number of whale addresses rose from 2,000 to 2,030, marking a transition from the “wait-and-see” phase of the last four months of 2019 to an “accumulation” phase. 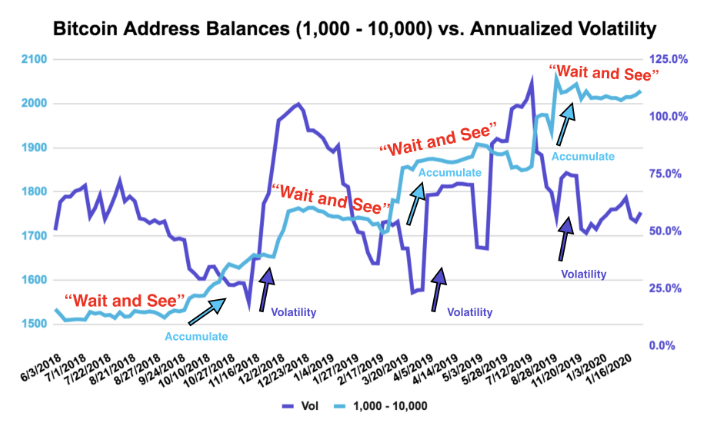 Historically, this transition has added volatility to the Bitcoin market. For example, whales began accumulating BTC in September 2018 and entered a wait mode in early 2019. As Kraken writes, the whales are now on the move again and are preparing for a new accumulation phase. The report also states:

Notwithstanding Jan.’s surge in price and modest tick higher in volatility, the number of whales in this cohort ticked higher as we approached month-end. This may mean that sentiment amongst the ₿1,000 – ₿10,000 cohort is starting to shift to a new accumulation phase.

According to the report, the whales have the resources to make a significant impact on the market with large orders. Strong and sudden price swings have been seen several times in the past during accumulation periods, as presumably happened yesterday (10pm, UTC) when the Bitcoin price suffered a sudden crash.

As regards the cohort ‘HODLers’ (10-100 Bitcoin), Kraken notes that it also influences market dynamics over time by contributing to market consolidation until conditions lead to a sharp increase in volatility. Currently, the “HODLer” cohort is also in an accumulation phase, after bottoming out in November. The number of addresses has increased from 135,000 to 137,500 in the last three months.

Based on the historical movements of the Bitcoin price, the report concludes that the accumulation phase could be completed in the coming weeks and that volatility will continue to increase:

We pointed out that in the past the number of addresses with ₿10 – ₿100 typically increases steadily before flatlining and then pulling back; it is then that we see volatility jump. Also, we stated that since bottoming out in Nov., this cohort appeared to have rotated into an “accumulation phase.” It was for this reason that we suggested not to expect Jan. to be the most volatile month of 1Q 2020 and instead to anticipate a slight uptrend at best. […]

Should history repeat, we anticipate accumulation to conclude in the weeks/months ahead and volatility to re-emerge. This dynamic of “accumulation preceding volatility” may be explained as an absorption of market liquidity, creating tight supply/demand imbalance conditions in the future. 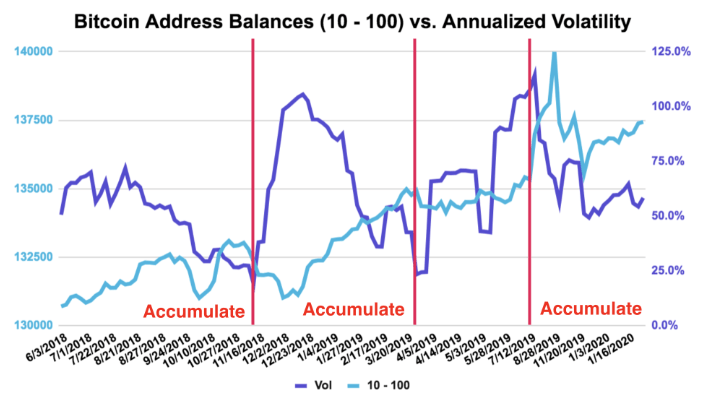 Should history repeat itself, the Bitcoin price could face another bullish outbreak. In the light of the Bitcoin Halving in May, it seems unlikely that the bullish market sentiment will end in the foreseeable future. After the fifth largest Bitcoin price crash within an hour, the BTC price has stabilized at USD 9,600.