Part of the Ethereum DeFi sector’s boom is based on its innovative protocols. Yearn.finance has been one of the most important in those terms and its creator Andre Cronje has announced a new update that “will probably be the most complex yet”.

Via Twitter, the popular developer of yearn.finance announced that Yearn’s new system will operate with the derivatives liquidity protocol Synthetix, loan protocol Aave, and Chainlink and will be able to run on either the first or second layer of the Ethereum network. That way, users could use the solutions that allow them to reduce transaction fees.

The creator of yearn.finance conducted a survey to ask his followers if they want to know more details of the whitepaper, because of the complexity he referred to, or if they prefer to wait for the launch of the new system. The survey is still active, at the time of publication, and with 53.9% of 5,847 votes the participants have leaned towards the second option: “Surprise me”. One user answered the following to the Cronje survey:

Sounds like synthetic assets mint/burn swaps using Chainlink oracles to determine the prices, AAVE to use funding for minting, and SNX contracts/ethos for overall architecture.

Along with the development of Yearn, Cronje has been particularly active with the governance model of the Uniswap decentralized exchange protocol. Since the launch of the UNI governance token, Cronje has made constant updates on the voting process that will allow the community to make one of the first decisions using the token.

The new yearn system is probably the most complex to date. It incorporates @synthetix_io @AaveAave @chainlink @iearnfinance and will be running on L1/L2

Trying to decide if we should do whitepaper-esque writeups to explain before launch, or just launch and surprise everyone?

“Yearn is the Amazon of decentralized finance”

Andre Cronje‘s popularity is evidenced by the impact he has on the crypto community. The announcement of the platform update has motivated Lou Kerner, founder of JustStable.com and partner at CryptoOracle, to write about the bullish future of Yearn and the DeFi sector. In a publication on Medium, Kerner stated that yearn.finance and its YFI governance token are “the most interesting and expansive project” he has seen in his three years of experience with cryptocurrencies.

Kerner shared an image of data analysis firm Messari comparing Yearn with Amazon. This is due to the protocol’s features that allow it to offer users a simple method to enter the DeFi sector and do yield farming without having to know the benefits of each protocol. These makes Yearn a protocol that quickly adapts to user needs and market trends. As the image below shows, Yearn has at least one product in the 6 main areas of the DeFi industry. 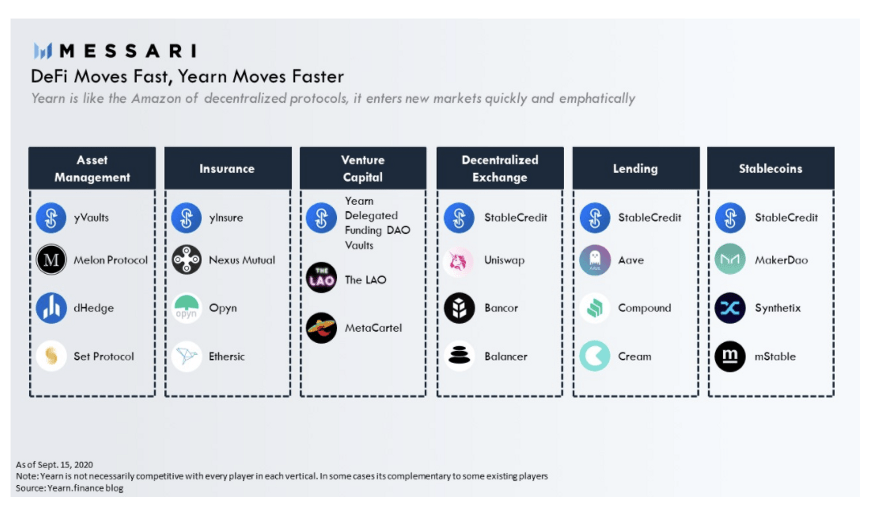 Kerner argues that yearn.finance’s constant innovations will make it an “effectively” difficult protocol to fork. He further stated that Cronje’s latest announcements, if completed according to plan, will make yearn.finance a “game-changing” platform. Kerner predicts that the YFI token will reach between $241,000 and $315,000 by the end of 2024. About YFI’s investors and Andre Cronje, Kerner concluded the following, citing another community member:

YFI is like volunteering for a spot on an expedition like the great European explorers or the first men in space. The danger, risk and rewards are all known before stepping on. Andre Cronje is our Ferdinand Magellan, but instead of circumnavigating the physical we will be the first to rebuild the financial.