While Ethereum 2.0’s phase 0 deployment is scheduled for December 1, the real deadline for the launch is November 24, 12pm UTC. In total 524,288 ETH need to be allocated in the deposit contract in order to launch phase 0 of Ethereum. With only seven more days left, data from Dune Analytics indicates that there may be an imminent delay ahead. Only 18.75% or 98,304 ETH were deposited at the time of publication.

The coordinator of Eth2, Danny Ryan, posted the following after the publication of the deposit contract’s address in case not enough ETH are deposited

To trigger genesis at this time, there must be at least 16384 32-ETH validator deposits 7 days prior to December 1. If not, genesis will be triggered 7 days after this threshold has been met (whenever that may be).

Dune Analytics also reveals that only 3,077 transactions from 476 single depositors have been made to the deposit contract. As shown in the image below, the ETH that has accumulated since the launch of the deposit contract has been steadily increasing with a significant rise in the last days.

While from November 6 to November 12, no significant participation was recorded, the trend seemed to change on November 14 and 15 with more than 16,000 ETH sent. However, this might not be enough, as more than 80% are missing. 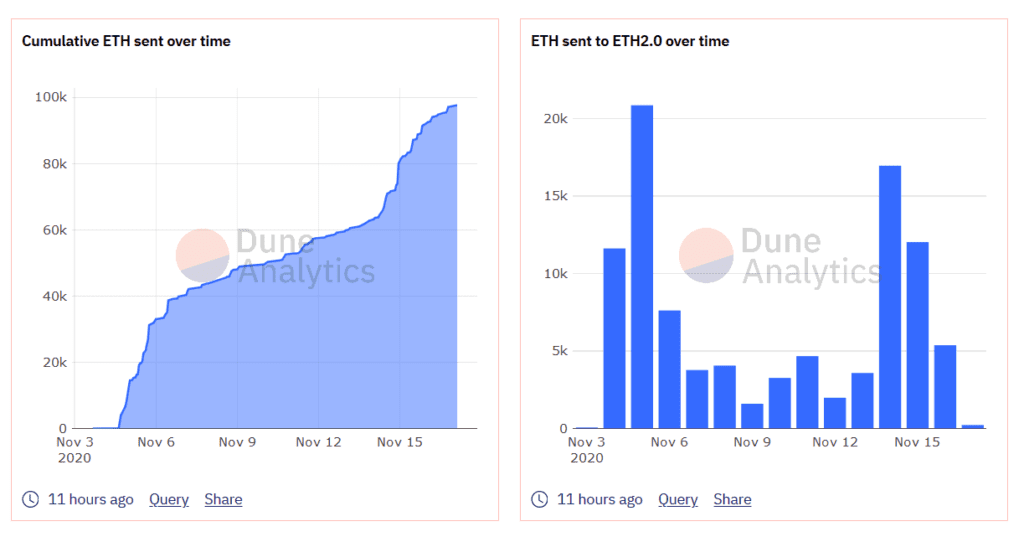 Reasons behind the lack of participation of Ethereum investors

As reported by CNF, investors have to send 32 ETH to the deposit contract to be part of the Ethereum 2.0 Beacon Chain deployment. That way, they can access staking rewards. However, as expressed by investor Qiao Wang, there do not appear to be sufficient incentives to encourage investor participation.

This problem is part of the development of Eth2 since the introduction of its testnets. On several occasions, Ryan and other core members of Ethereum have had to invite the community to diversify the clients they use, and to participate. Therefore, the potential interest of users seems to have been overestimated. Furthermore, it seems that the developers have made the decision to implement the deposit contract in a too short timeframe due to the pressure to start phase 0 in 2020 after a long period of delays.

Currently, ETH is trading at $470 with a gain of 25.56% last month. While the fundamentals for a price breakout are strong, this might be why many investors prefer to have liquidity to take profits rather than leaving their ETH “locked in” for at least 2 years.

In addition, Ethereum miners appear to have reservations about Eth2. The inventor of Ethereum, Vitalik Buterin, has already stated that the future of the network does not favor miners. Therefore, it seems logical that this sector should refrain from sending ETH to the deposit contract. One miner stated:

A lot of us ETH miners aren’t staking, because that means accelerating the end of ETH mining. So, by us not staking, we are saying quite a bit.

However, some solutions have been proposed to increase the participation. For example, a yEarn developer suggested creating an ETH 2.0 validator vault to allow small investors to participate. Darma Capital wants to provide loans so that investors have access to the rewards of the investment, but using stablecoins.