Cardano was the first blockchain developed from the beginning, based on a scientific philosophy.

A large part of its development is linked to the academic research work carried out by the most prestigious technological universities.

Charles Hoskinson, Co-Founder of Cardano and Executive Director of the IOHK, assures that they are currently participating in a consortium formed by outstanding entities and companies from the European Union.

Here is the consortium we are part of with the European Union to study decentralized software updates https://t.co/7yLCGWQAWK we should have a great paper out sometime in the summer on the topic

In this consortium, called Priviledge, we find members from all fields, from scientific universities such as the University of Tartu and Edinburgh or the Technological University of Eindhoven, as well as companies from the sector such as IBM or GuardTime.

This group focuses on the search for solutions and development of distributed ledger technology (DLT), as more and more companies and governments demand their services.

The consortium has already acquired a grant for its research work, thanks to the EU’s Horizon 2020 research and innovation programme.

Among its main tasks, they focus on addressing security and privacy issues in blockchain

The World Economic Forum in Davos was very productive for Cardano, as it secured the alliance of two major players, ScanTrust y Berkman Klein Center. ScarnTrust will provide security solutions for supply chain traceability. On the other hand, Berkman Klein Center, belonging to Harvad University, will support Cardano’s ecosystem by carrying out research on decentralized governance.

In addition, another of Cardano’s recent prominent partnerships, Gen Two AG, has announced the intention to launch a new financial product to the market using its blockchain. DeFi systems are booming, and 2020 could be the year of consolidation for this type of financial service.

Where will the ADA price head to?

The price of ADA, with respect to the USDT pair, is particularly bullish, after having successfully completed the cup-to-handled pattern, which has implied a change in the price trend. 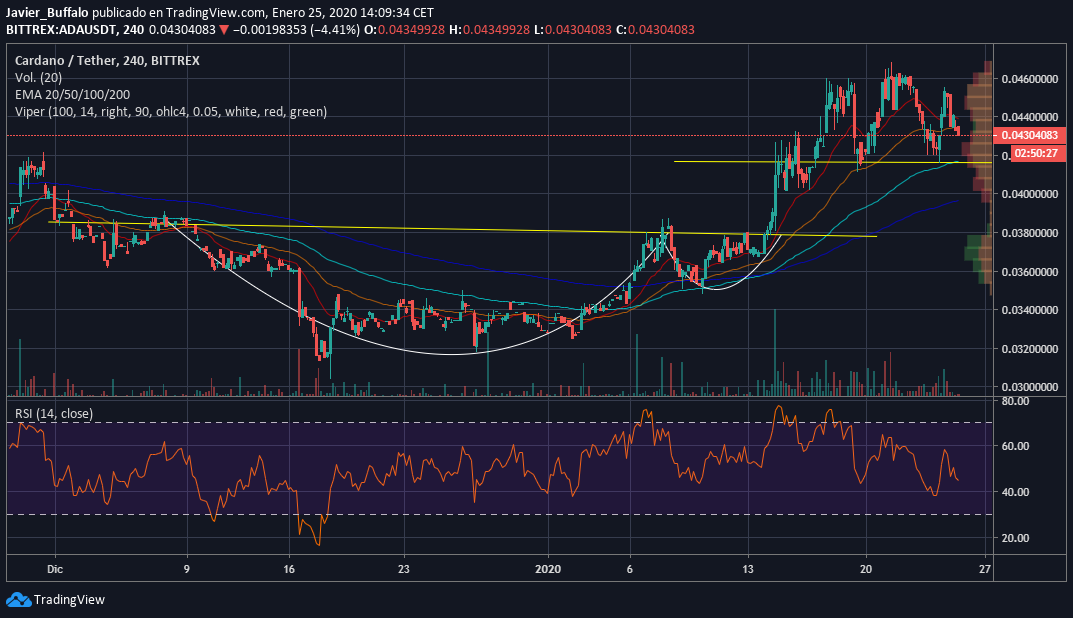 ADA completed its turnaround by breaking the neck of the handle-cup formation at $0.038 with a large trading volume.

We see a significant increase in trading volume at that level, as shown by the volume profile, so we may be seeing a re-accumulation before the uptrend continues.

At $0.041 the 100-period Exponential Moving Average is being set, and there was a strong rebound with a long wick at the candle closure, so we consider that price to be a pretty solid support to break out.

In short, the trend is upward, lateralizing within the mentioned range.

The $0.047 is the key resistance to continue with the bullish rally, however, a break of the support at $0.041, could imply a reversal of the trend.