Bitcoin has had an unpredictable 2019, mostly positive in terms of performance. It managed to outperform the S&P 500 and it became the undisputed King of adoption.

The investment firm Blockchain Capital confirms that in a newly published report. Among the latter are the approval of Facebook Libra and the increase in the price of Bitcoin beyond $ 20,000 USD.

Bitcoin is responsible for the recovery of the cryptomarket

Blockchain Capital’s report recognizes the trend that has been consolidated during 2019: Bitcoin is a store of value. Blockchain Capital states that this has been demonstrated above all in global scenarios of instability. Bitcoin has had a powerful presence as an alternative for citizens in countries with economies in crisis. As seen in Venezuela, Iran, Argentina and Africa:

At a macro level, the narrative of bitcoin as an uncorrelated asset emerged. In the face of rising global instability and negative yields, allocators are in need of alternative stores of value.

The investment firm also states that the growth of the cryptomarket was 73 billion dollars during 2019. However, it attributes 93% of the growth to Bitcoin. In yield BTC was moved to the second place by the BNB with a positive percentage of 155% against 98% of BTC.

Ripple and Stellar Lumens were the companies most affected. Despite the positive announcements and alliances Blockchain Capital gives a negative performance of 39% to Ripple and 45% to Stellar. 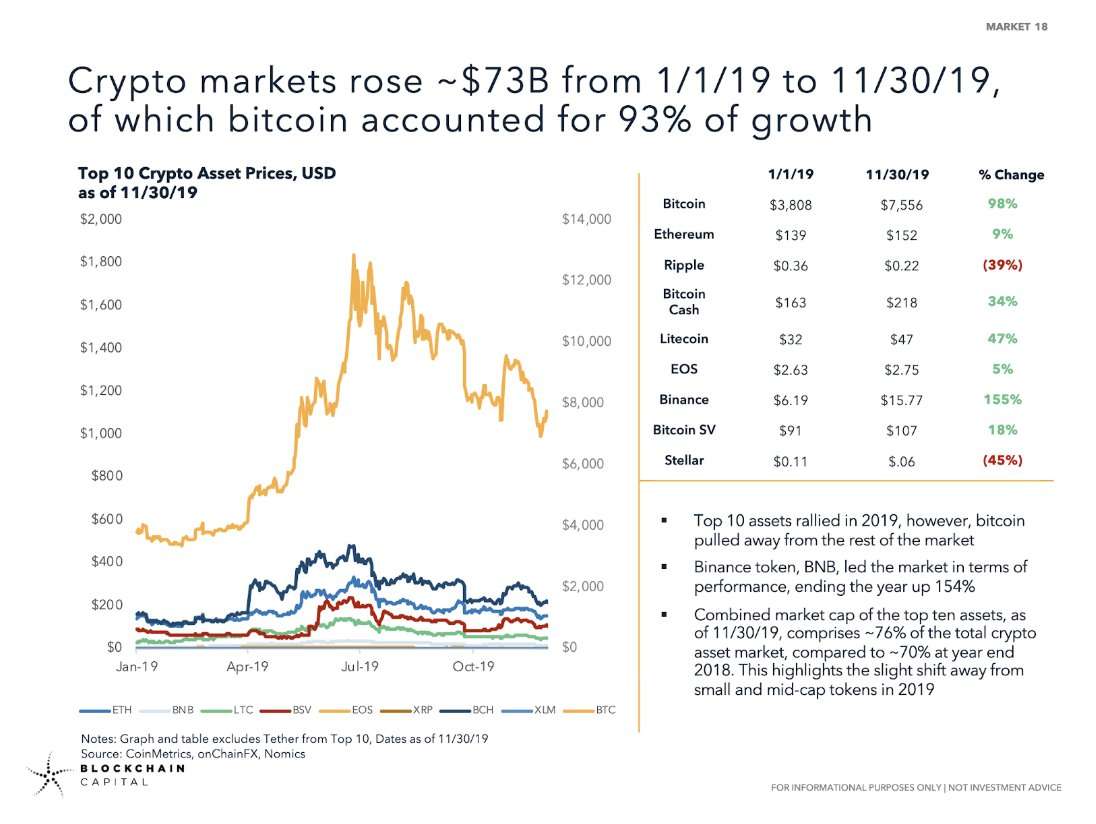 Blockchain Capital places the market recovery during 2019 at 56%. On the other hand, the report states that Tether is the predominant stable currency. While Ethereum, the second cryptocurrency to grow in terms of capitalization after BTC, is the leading platform for smart contracts.

On the other hand, the report says that the return of the ICOs was framed in the form of IEOs that proved to be an unsustainable model. While decentralized finance (DeFi) became the strongest use case.

1) We’re excited to share Blockchain Capital’s 2019 Year in Review and our bold predictions for 2020!

The report also offers a look at what 2020 will bring. Predictions from the Blockchain Capital team touch the most important areas of the cryptomarket.

First, the report asserts that regulations toward cryptocurrencies will remain complex. However, it states that privacy coins will receive the hardest blow by being removed from the lists of exchanges as has occurred.

One of the projects delayed by regulators and governments is Facebook Libra. Blockchain Capital’s report states that this will cease to occur in 2020. They claim that Libra will be approved to gain an advantage over China’s digital Yuan. The Asian giant’s CBDC is about to be launched and could have an early lead in the race for digital coins.

Finally the report predicts a rally for Bitcoin. The investment company claims that the growing demand for Bitcoin will make it surpass its historic record of 20,000 USD. Without reaching the million predicted by the investor John McAfee.