The Bitcoin price saw a long red candle yesterday evening, around 18:30 UTC, from USD 7,100 to USD 6,818. Along with the leading cryptocurrency, the altcoins also fell rapidly in less than ten minutes: Ethereum (-7%), XRP (-8%), Litecoin (-8%), EOS (-8%) and Binance Coin (-9%), experiencing a sell-off that resulted in about six billion US dollars flowing out of the crypto market. The total market capitalization fell from 193.7 billion to around 186.5 billion US dollars.

The drop of Bitcoin’s price in particular is currently causing concerns on the market, as the USD 6,800 mark represents a technically significant level. At the time of writing, BTC was trading at USD 6,877 and was on a knife edge.

Is PlusToken responsible for the Bitcoin price drop?

The supposed cause of the price drop was quickly identified in the crypto community: PlusToken. The ponzi scheme, which was popular in Asia, is considered one of the biggest fraud cases in the history of the crypto industry. CNF had already reported several times about PlusToken and its probable impact on the crypto market.

Chainalysis published a new report yesterday, a few hours before the price drop, stating that 20,000 BTC and 790,000 ETH are probably still in the possession of PlusToken fraudsters. But whether yesterday’s fall in prices is actually related to the PlusToken scam is pure speculation. Chainalysis did not comment on this. Possibly the report also (once again) only caused fear among investors as a result of which the sell-off took place.

Actually, the new Chainalysis report even contains positive news. As the analysis company stated, PlusToken probably has fewer cryptocurrencies in stack than previously reported by the Chinese media. Chainalysis writes that instead of the 2 to 3 billion USD previously assumed, only 20,000 BTC and 790,000 ETH (currently around 242 million USD) are still in the possession of the fraudsters. According to the report, Chainalysis could only identify about 45,000 BTC and 800,000 ETH as “definitively” controlled and washed by PlusToken.

Chainalysis believes that a portion of PlusToken’s assets, which at times amounted to USD 2 billion in cryptocurrencies, were returned to investors to maintain the illusion of high returns. As a result, the current holdings are much smaller than previously assumed. While 25,000 BTC have already been liquidated via Huobi’s OTC platform, only 10,000 ETH have so far been paid out. Accordingly, the new estimates conclude that PlusToken still owns 20,000 BTC and 790,000 ETH in a single wallet.

Causal link is at least questionable

For quite some time now, PlusToken has been suspected of being responsible for the downward trend that began at the end of June. At least the temporal correlation is conspicuous. The first arrests of the PlusToken fraudsters took place just over a week before Bitcoin’s annual high of about USD 13,800 on June 26.

While Chainalysis does not conclude in its report that the liquidations of PlusToken have caused the bear market and Bitcoin’s price to plummet. However, the company claims that the payouts correlated at least over time with Bitcoin’s price drop and caused increased volatility, as the following Chainalysis chart shows. 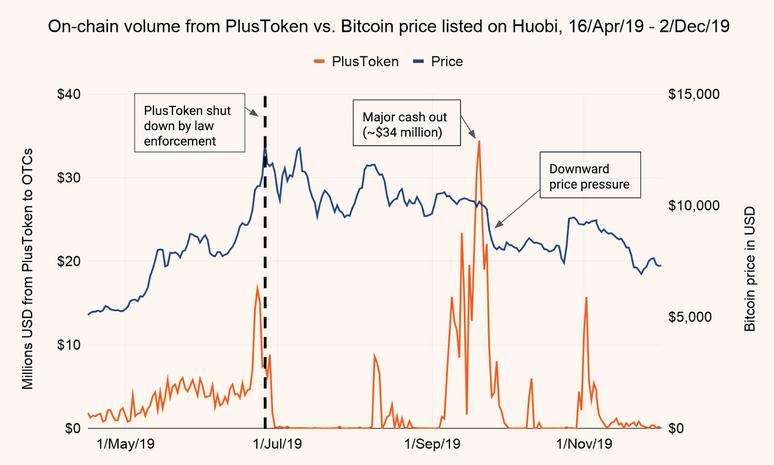 Crypto News Flash does not endorse and is not responsible for or liable for any content, accuracy, quality, advertising, products, or other materials on this page. Readers should do their own research before taking any actions related to cryptocurrencies. Crypto News Flash is not responsible, directly or indirectly, for any damage or loss caused or alleged to be caused by or in connection with the use of or reliance on any content, goods, or services mentioned.
Bitcoin BTC PlusToken
Previous ArticleEthereum: The Difficulty Bomb already ignites – Block times are increasing
Next Article TRON news: Justin Sun announces beta test for shielded transactions via zk-SNARK