Ethereum is expected to conduct the Muir Glacier hard fork between January 01 and January 4, 2020. As CNF reported, at the last meeting, the core developers of Ethereum agreed to activate the next hard fork at block number 9.069.00 to delay the Difficulty Bomb by 4 million blocks, about 1.7 years. However, as the latest data from Etherscan indicates, the bomb is already slowly “exploding”.

This is especially reflected in the two metrics: block time and difficulty. The block time has risen continuously since the beginning of November, with a significant increase especially on December 14th. While the average block time from March 2019 to the end of October was around 13 seconds, it rose yesterday to almost 17 seconds, as the graph shows. 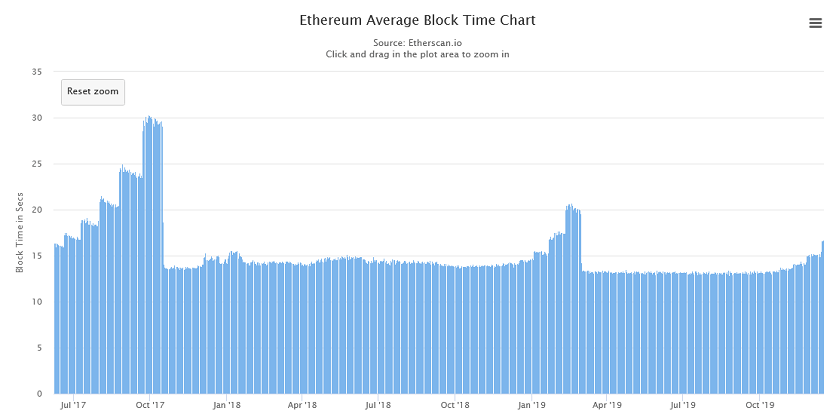 The cause for the rising block time can be seen in the difficulty (as the name “Difficulty Bomb” already suggests). The Ethereum mining difficulty has increased continuously since the beginning of March, when the Constantinople hard fork (February 28, 2019) was activated. Currently the value is within reach of the level at the time of the last fork. 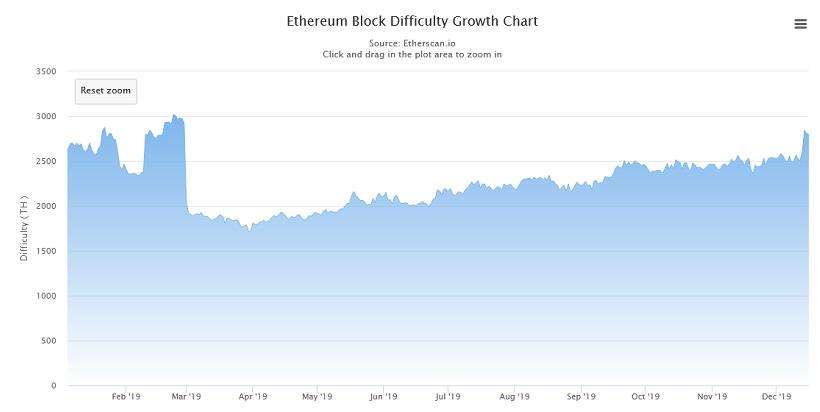 What are the effects of the “explosion” of the Difficulty Bomb?

The Difficulty Bomb is a separate mechanism that manipulates the difficulty using a complex algorithm that increases the value every 100,000 blocks. This value is small at first, but increases exponentially, so that the effect is hardly noticeable at first, but then becomes apparent very quickly. Pooja Ranjan said in a recent blog post by Ethereum Cat Herders that the timing was difficult to predict:

The timing of when the difficulty bomb begins to kick-in is difficult to estimate. While planning Istanbul, it was first estimated that the bomb would not be noticeable until mid-2020. This implied that it could safely be delayed in the follow-up upgrade to Istanbul. However, those estimates were wrong.

The noticeable effect has just arrived in the Ethereum network. The increases through the Difficulty Bomb are too large for the difficulty retargeting mechanism. As a result, the block times increase. This leads to a decrease in the usability of Ethereum, as it takes longer to confirm transactions.

To eliminate the problem in the long run, the Muir Glacier Hard Fork is implemented, which contains only one improvement, EIP 2384. With the new hard fork, the Difficulty Bomb is further delayed, allowing the Ethereum network to process transactions faster again.

Estimating the added impact from the difficulty bomb on block times shows that we will see 20s block times near the end of December 2019 and 30s+ block times starting February 2020. This will start making the chain bloated and more costly to use.

At the time of writing, 46.5% had already upgraded, with the second largest Ethereum client, Parity, releasing new versions ready for Muir Glacier only yesterday, December 16th. Accordingly, 0% of the Parity clients had been updated at the time of writing.