In China, electricity also costs little money, so many Bitcoin Miners have settled in the Middle Kingdom. According to a new report, however, the miners in the Sichuan region require too much electricity during the dry season and have to limit their activities.

Bitcoin miners must shut down operations

The southwest of China is currently experiencing a dry season, which means that some regions, such as Sichuan, are experiencing shortages of electricity. The dry season extends from October to April, and local authorities have urged Bitcoin Miner to significantly reduce its activities.

During the rainy season, hydroelectric plants are allowed to provide Bitcoin Miners with electricity that is not needed to supply the local population and industry. Under normal conditions, Bitcoin farms coexist in symbiosis with hydroelectric power plants and use the excess energy that can be produced thanks to the East Asian plum rain.

As we have already reported, Bitcoin mining will not be banned under the new Crypto-Law, which comes into force on January 1, 2020. Nevertheless, the local government in the Tibetan Garze autonomous Region in Sichuan recently called for a clean-up of the region’s mining sector. The authority has convened a meeting to discuss the issue.

The meeting was originally scheduled for December 25, 2019, but was postponed until December 27, 2019. So far, however, according to official Chinese sources, no final results are available. However, a representative of a Bitcoin mining company in the region describes that it will not have a major impact on mining operations in China.

The authorities in Garze have complained about the noise and heat pollution caused by Bitcoin Miner and even claim that these pose risks to the public and the environment. Allegedly some structures have been built illegally and some mining companies do not pay local taxes or fees.

Many Bitcoin miners are unable to work in Sichuan in winter and are moving to other provinces rich in thermal power. Local authorities are taking increasingly tougher action against illegally operating power plants and imposed two fines of nearly $140,000 in December. The affected power plants have supplied electricity to Bitcoin farms without a license. 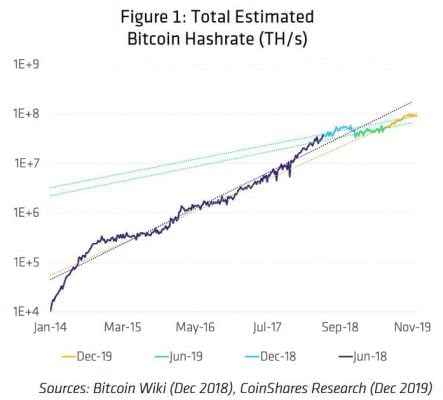 The largest and most important mining areas in China are the Chinese provinces of Yunnan, Xinjiang, Inner Mongolia and Sichuan. The following map of the report shows where the strongest concentration of hash power is located worldwide. 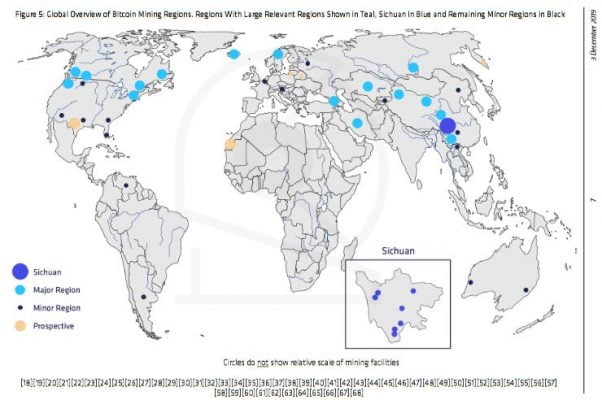 Despite the restrictions prevailing in China, Chinese miners control a large part of the hashrate. Local authorities confiscated more than 7,000 miners illegally consuming electricity in December this year. This involved the control of more than 70,000 households, factories and businesses in villages in the Kaiping district of Tangshan city.

These developments come as no surprise, as China clearly supports and promotes Blockchain technology. However, Chinese President Xi Jinping is critical of crypto currencies such as Bitcoin. Therefore it remains to be seen what further developments can be observed.

The price of Bitcoin continues to move sideways and stands at USD 7,263.24 at the time of writing.