The VeChain Foundation has started the first decentralized voting on December 25, 2019. During this vote all VeChain Thor stakeholders could vote on whether the stolen VET tokens of the hack should be burned and thus withdrawn from circulation. As reported by CNF, unknown attackers were able to steal 1.1 million VETs from the buy-back wallet on December 13, due to the mistake of an employee of the VeChain Foundation.

A total of 469 VET addresses were affected by the hack. The addresses were blocked after identification by an emergency patch, VeChainThor v1.1.5, so the hackers had no chance to sell the VET. The patch was initially approved by the VeChain Foundation Steering Committee. However, as part of the decentralized approach, the VeChain stakeholders were also supposed to vote on the measure.

The first “all-stakeholder vote”, where all Authority Master Nodes, X Nodes and Economic Nodes could vote, ended yesterday. As the results show, the VeChain community voted unanimously for the permanent implementation of the black list introduced with VeChainThor v1.1.5. The VeChain Foundation thanks all participants (freely translated):

As the Foundation writes, by the end of the all-stakeholder voting process, the required participation rate of each stakeholder category of 15% had been achieved. Between block #4,677,898 and block #4,721,015 a total of 1,410 valid votes were cast. An overwhelming majority of 99.06% voted for the permanent implementation of address blocking, while only 0.94% voted against it.

Based on the final result the VeChain Foundation will publish another update in the coming weeks to implement a permanent blockage of the affected addresses. This means that a total of 727 million VET will be permanently withdrawn from the market.

In addition to the team lockups, X Nodes and Economic Nodes have increased their holdings, “demonstrating the continued long-term confidence of key stakeholders in the VeChain ecosystem”. At the end of the reporting period, approximately 47.6% of the total VET offer was tradable on the open market, as shown in the chart below. 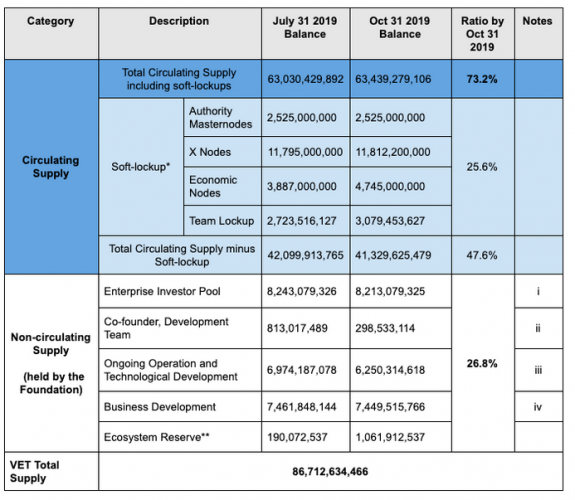 VET’s price has suffered somewhat from the hack described above and has recorded a minus of 7.57% in the last 7 days.