Coinbase is the largest cryptocurrency exchange in the United States of America and has more than 20 million active customers. The most bought coin is still Bitcoin, closely followed by other prominent Altcoins. A new report from the ICO news website cryptodiffer.com shows that the holding period has increased further compared to the last survey.

BTC, ETH and XRP on the top ranks

Coinbase provides various trading signals on its own platform, allowing users to prepare their decisions and analyse further metrics. These include the typical hold time of a cryptocurrency, the popularity of the cryptocurrency on Coinbase and the trading activity.

Cryptodiffer.com has analyzed these three metrics and found that the average hold time has continued to increase over the last 4 weeks. Bitcoin, Ethereum and XRP are among the most purchased cryptocurrencies on Coinbase. These statistics show that although the market capitalization has dropped from 210 billion USD to nearly 197 billion USD since the end of November until today, users of the platform hold cryptocurrencies longer. 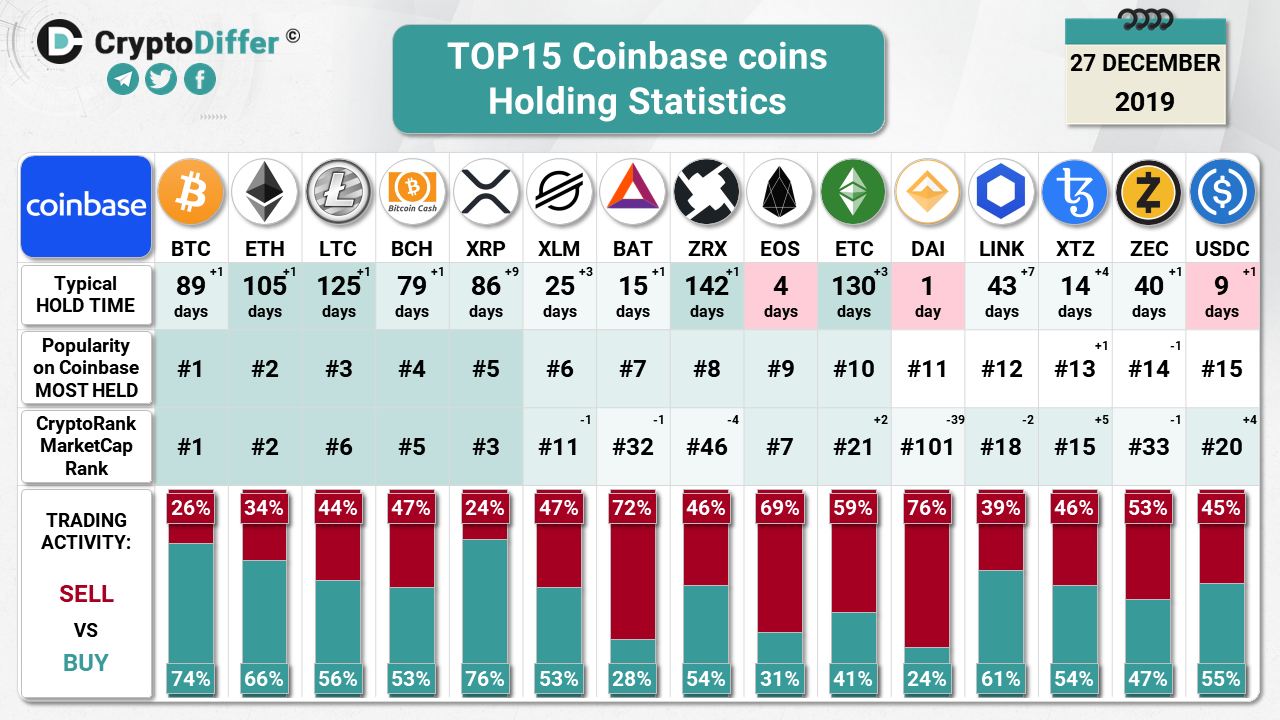 It is also striking that the holding period of Tezos has increased by 40% compared to the last survey. This is probably due to the Tezos-Staking implemented by Coinbase. Tezos holders receive a guaranteed annual staking profit of 5% each year for holding Tezos. The profits are distributed in proportion to the amount of assets held on the exchange.

Coinbase has also overtaken Polychain Labs as the largest validator in the Tezos network. However, this development comes as no surprise, as Coinbase had to buy more Tezos to be able to offer the staking service on a sufficient scale. Exchanges like Coinbase can only guarantee their users a profit if they keep XTZ in sufficient volume.

The Twitter user The Don pointed out already in early December that Coinbase has to buy more than one million XTZ in order not to lose staking rights and to be able to pay the users.

Adaptation of cryptocurrencies in the USA is increasing

Coinbase had published a report in early November showing that more than 27 million people in the United States own Bitcoin, representing 9% of the total population. Furthermore, the analysis service Google Trends shows that the interest in Bitcoin is growing more strongly, even displacing search queries such as “royal wedding” or “election results”.

Although these statistics show that Bitcoin has been able to achieve a positive development in various areas, Bitcoin shows a high volatility and a high investment risk. The price of Bitcoin has been trending sideways (+0.67%) over the last 24 hours and at the time of writing stands at USD 7,369.

Bitcoin Coinbase Ethereum Ripple XRP
Previous ArticleUEFA tickets to be sold on the Ethereum blockchain
Next Article Ethereum under fire: What happened to 12 million ETH?