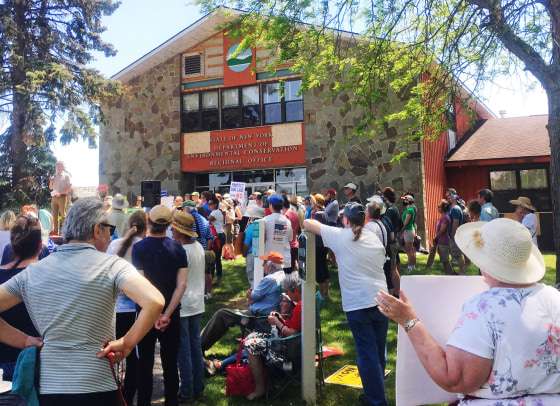 NY residents rally against a BTC miner. Courtesy of NBC

Bitcoin mining has been the subject of heated debate the world over, with China leading those taking a firm stand against the industry. In New York, a mining farm is dividing the local community. Those opposed to it have pointed to the ever-rising carbon emissions and claim that it’s even heating up the local lake. Those in support believe it has done more good than harm, pointing to the economic development it has sparked in the area.

The operation in question is owned by Atlas Holdings, a private equity firm, but is operated by Greenidge Generation LLC. According to some locals, the operation has been polluting the environment and has to go. This group has pointed to the continued pollution of Lake Seneca, the largest of the Finger Lakes.

One of the residents, who lives close to the lake, told NBC:

The lake is so warm you feel like you’re in a hot tub.

Being a warm summer in the U.S, residents of upstate New York would be fishing and swimming on the Finger Lakes. However, many of them have taken time off to go protest the mining farm. These protests have yet to yield any results, with the miners not giving in without a fight.

These crypto operations are looking for anywhere that has relatively cheap power in a relatively cool climate. It’s a horrible business model for all of New York state, the United States and for the planet.

One of the defenses that the miner has used is that it has been purchasing carbon credits to offset its carbon emissions. These credits are tradeable certificates that permit an entity to emit carbon dioxide and other greenhouse gases without the ramifications. Tesla was recently caught up in controversy after banning Bitcoin payments yet its biggest revenue source was selling carbon credits to greenhouse gasses emitters.

However, the locals have disputed this defense. Judith Enck, an environmental expert, told the outlet:

Carbon offsets are not a particularly effective way to reach greenhouse gas reduction goals and there is no system in place to regulate it in New York.

New York had established a goal in law of reducing greenhouse gas emissions by 40 percent by 2030. The state will not reach that goal if the Greenidge Bitcoin mining operation continues.

The miners have defended their operation, claiming that not only have they bought the carbon credits, they’ve also created employment for the locals. Jeff Kirt, the Greenidge CEO revealed that it has employed 31 locals, and will bring in at least 10 more this year.

He added, “The environmental impact of the plant has never been better than it is right now.”

Greenidge had shut down years ago, but it was revived by Atlas Holdings which acquired it in 2014. Three years later, it started operations, but would only supply power to the grid during times of high demand. Three years ago, however, Greenidge got into BTC mining. It has been profitable since then.

The miner also has its own supporters in the local community. One of these, a former local newspaper editor, told NBC:

The tax base is growing, and that’s helping the school, the county, and the town tremendously. Their employment has always been good, solid jobs for local workers.