What is Komodo? This question is answered by the Komodo team on the official website in a single sentence:

Komodo is the most advanced blockchain platform in the world.

Based on this pompous statement, you might think that Komodo is just another scam coin who makes big promises but can’t keep them. However, this is not the case with Komodo. As soon as you get to know the Komodo Blockchain and the Komodo technology, you will notice that Komodo actually provides a very advanced and innovative blockchain technology.

The Komodo Blockchain, like so many projects, has its origin in the Bitcoin Blockchain, at least indirectly. Komodo is a fork from Zcash (ZEC), which split off from Bitcoin in October 2016 to solve the problem of Bitcoin’s lack of anonymity. Accordingly, Komodo also has the privacy features of Zcash (such as Zero Knowledge Proofs). However, the beginnings of Komodo date further back.

Already in 2014, the inventor of Komodo James “jl777c” Lee recognized a problem with blockchain technology and therefore developed a proxy token gateway on the NXT platform. This allowed NXT to be exchanged for BTC and other popular cryptocurrencies. Out of this idea “jl777c” wrote the “Blockchain Decaration of Independence” in February 2016 and founded the Komodo platform. You may have guessed the problem James Lee wanted to address by now.

Each blockchain is autonomous and cannot communicate with other blockchains. For example, at that time no Bitcoin (BTC) could be directly transferred from one person to another against Litecoin (LTC), i.e. peer-to-peer, without there being an intermediary (an exchange). James Lee found this problem unacceptable in a world of decentralized cryptocurrencies. Komodo compares this problem with the situation of mainframes at that time, which also only functioned self-sufficiently.

As a result, Lee developed a multi-blockchain architecture that allows projects to create their own blockchains and host initial coin offerings (ICO) without having to use the token of the Komodo platform (such as Ethereum or EOS). The “Smart Chains”, as Komodo calls the blockchains within its ecosystem, exist independently of Komodo, but can communicate with each other.

The Smart Chains are “turing-complete”, so that everything imaginable can be encoded into a Smart Chain. In addition, the blockchains have their own coin to pay for transactions, have their own consensus and support an unlimited number of smart chains. More about this later.

After Komodo was able to earn a total of 2,639 BTC in October 2016 as part of an ICO, the Komodo Mainnet was launched in January 2017. Since then, Komodo has released numerous features that have contributed to the interoperability of the blockchain economy:

Komodo is therefore a project that takes a completely different approach to Ethereum, EOS or Tron, for example. The developers around James Lee attach great importance to interoperability. Overall, the Komodo project is not only characterized by interoperability, but also pursues four other basic principles:

As we have already explained, the Komodo Project is committed to unifying the Blockchain ecosystem. But what is Komodo doing to advance its own platform in the form of interoperability? Each blockchain within the Komodo ecosystem can exist independently of each other without being dependent on the Komodo blockchain or the KMD coin.

At the same time, the smart chains are compatible with other smart chains within the ecosystem and can therefore communicate. This means that cross-chain smart contracts are possible. This allows any Komodo-based project to exchange data via the Komodo blockchain with any other smart chain and solve problems. Regardless of this, the transaction fees are always paid with the native coin of each smart chain, since each blockchain has its own decentralized network and consensus mechanism. This ensures the autonomy of each Smart Chain. 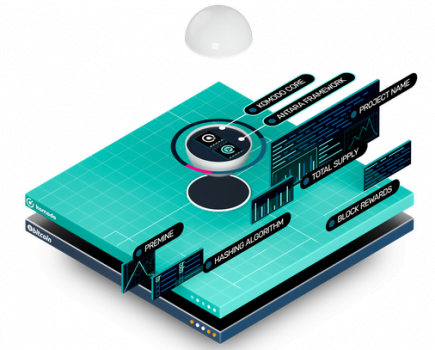 To make the creation of Smart Chains as easy and fast as possible, Komodo provides the Antara Framework. This provides each Smart Chain with a library of modules, whereby the desired modules can be activated and deactivated. According to the Komodo website, “specially developed Smart Chains with any number of Seed Nodes and Mining Nodes can be customized and launched in minutes on the Amazon Web Services (AWS) Marketplace”.

In addition, Komodo also offers white label products, including a Multi-Coin Wallet, a DEX and a Block Explorer, to accelerate the introduction of smart chains to the market. The following video shows how a blockchain can be created in just 5 minutes.

In terms of security, Komodo can provide a “Bitcoin-level security” with the anonymity of Zcash. The basis for security is the Delayed Proof of Work (dPoW), which connects to the hash power of the Bitcoin network. This works by storing a backup of the KMD blockchain in each block of the Bitcoin network (every ten minutes). This security mechanism is provided by the globally distributed network of 64 community notary nodes.

This process is therefore very desirable, since Bitcoin has by far the largest hash power of all blockchain networks. All UTXO-based smart chains can benefit from this security mechanism.

Another central requirement of Komodo is scalability that sets no limits for the applications on the platform. For this purpose Komodo has developed the Multi-Chain-Syncing-Technology, whose idea is not new in the crypto-community, but hardly implemented better by any other project than Komodo. The Smart Chains are (simply put) nothing more than sidechains.

As a project grows and an app needs more resources, an additional smart chain can easily be created. This allows projects to extend to additional blockchains to increase scalability. Theoretically, Komodo’s multi-chain architecture enables the creation of an infinite number of smart chains.

The Komodo team has thus developed a scalability solution which, according to its own statements, clearly outperforms the competition. Smart chain technology is expected to reach one million transactions per second in the future, with each transaction containing up to 100 payments, which means that Komodo can theoretically process up to 100 million payments per second.

For the introduction of multi-chain syncing technology in July 2018, a test was carried out that proved that Komodo can process over 20,000 transactions per second (with 1,024 blockchains). Multi-chain syncing technology creates a fully interoperable ecosystem with a variety of smart chains. All smart chains process transactions simultaneously and are synchronized with all other blockchains in order to achieve interoperability of the smart chains.

As described above, the Antara Framework provides a fully modular library for developing smart chains. Each blockchain on the Komodo platform can be adapted to the needs of the project, whether it is the consensus algorithm, block reward, optional private transactions or block time.

KMD is the native token and an integral part of the Komodo network. The Komodo consensus mechanism would not be operational without KMD.

It is important to know that Komodo users with addresses above 10 KMD (as a single UTXO) can receive a 5% reward. The reward, however, only accrues up to 1 month after a transaction to reward active users. Put simply, the calculation of rewards depends on an optional transaction parameter called `nLockTime`. However, most exchanges and wallets do not set this parameter, which is why they do not pay any rewards.

Wallets that support the Reward are the Agama Desktop and Mobile Wallet, the Komodo CLI Wallet and the KomodoOceanQT Wallet. You can check your balance on the following websites:

Conclusion: Is Komodo worth an investment?

Komodo is another blockchain that provides an ecosystem for ICO alignment and application development. This puts Komodo in a category and in competition with Ethereum, EOS, Tron, Cardano or Lisk, to name but a few examples. Although the competition is fierce, Komodo can differentiate itself from the competition with features such as multi-chain syncing technology, smart chains, delayed proof of work and Atomic swaps.

Whether this will be sufficient for Komodo to prevail against its competitors and achieve mass acceptance remains to be seen. A scalability of 1 million transactions per second is great from a technical point of view. However, it also requires a large number of users for the technology to be used at all. In this respect, the official launch of AtomicDEX and its development could have a significant impact on the success of the Komodo project.

The following video offers a good summary of the Komodo project, in which the anonymous founder of Komodo talks about the project and its goals in an interview.