A new study by Clover concludes that the leading cryptocurrencies are still held by a small group of whales. For its analysis, the company compared the wealth distribution among the 140,000 non-exchange addresses of Bitcoin, Ethereum, Litecoin and Bitcoin Cash and found that “surprisingly few accounts are needed to form majority ownership of many coins”.

According to Clover’s results, Litecoin is among the top cryptocurrencies with the greatest wealth inequality. Only 189 addresses have assets that account for more than 50% of the total supply. The richest Litecoin address owns about 2.58% of all Litecoin. Regarding Ethereum, Clover concluded that only 322 “whale” addresses own more than 50% of all ETH, with Ethereum being the only leading cryptocurrency in 2019, whose wealth inequality increased by 13% in 2019.

The wealth distribution is slightly better for Bitcoin Cash (BCH). A little more than 1,100 wallets hold more than 50% of the total supply. From the Clover study’s point of view, however, Bitcoin (BTC) has the “fairest” wealth distribution. For 50% of the total supply, as many as 4,545 wallet addresses would have to be owned by one person (whereby several addresses can belong to one person). The richest Bitcoin address contains only 0.62% of the current circulation.

To measure wealth inequality, Clover used the Gini index, a classic measure to assess the distribution of wealth across the entire distribution of the 10,000 richest addresses in each currency. Among the top 4, Bitcoin (0.65) had the lowest wealth inequality, ahead of Bitcoin Cash (0.75), Ethereum (0.78) and Litecoin (0.83). In comparison, Clover stated that the income inequality of the United States of America was 0.49 in 2018. 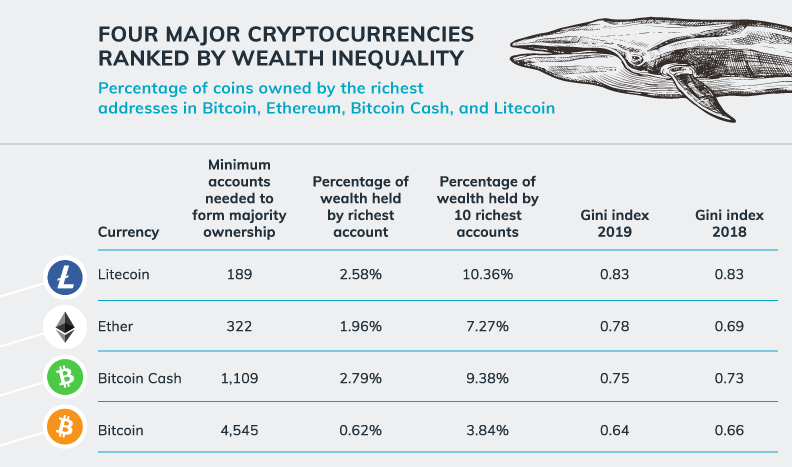 ERC20 tokens are much more centralized

Regarding ERC20 tokens, Clover has found that even leading assets have a significant uneven distribution. Among the 100 Ethereum tokens with the highest market capitalization, the average number of addresses that could control a majority of the assets was 34 addresses, with this number varying widely from token to token.

Clover also found that 24 of the 100 largest tokens were majority owned by one address, almost always owned by the founder. According to the following list, the Huobi token has the highest wealth inequality measured by the Gini index. However, 97.93% of the Veritaseum tokens, which had the third highest wealth inequality of the 100 analyzed tokens (Gini 0.996), is held by one person, the founder Reggie Middleton. 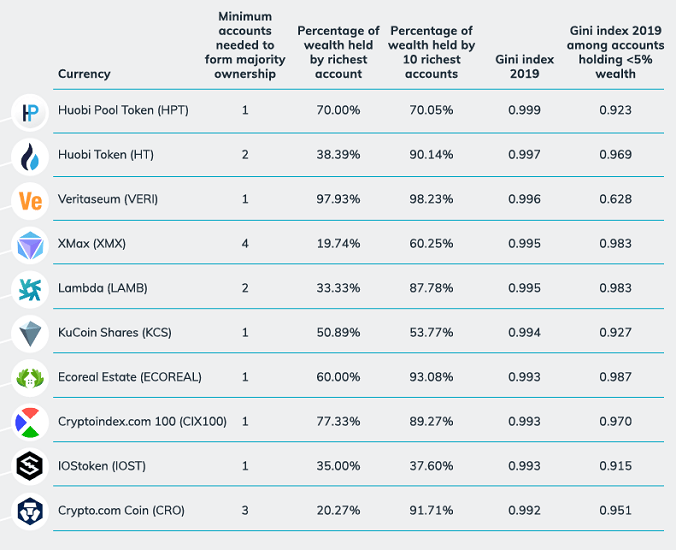 As market capitalization increases, however, the inequality of distribution also tends to decline. In this respect, the study concluded:

Perhaps successful tokens attract more investors and divide wealth among more addresses. It is possible that tokens with smaller market capitalizations are younger and can balance wealth over time. 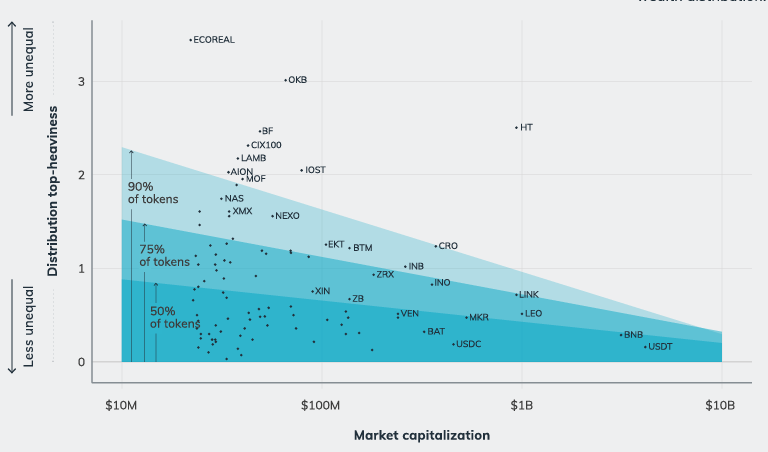 What are the consequences of inequality for the market?

As Clover points out, a few “whales” could undermine the decentralized principles of the individual blockchains and cryptocurrencies:

Just as whales cause the most excitement in the oceans, some investors trade coins in such large quantities that they affect the value of the coin itself and possibly undermine the decentralized principles on which blockchains and crypto currencies are based.

Lower liquidity and higher volatility mean that whales can make “bigger waves” on the crypto market. This could also explain the high volatility of the cryptocurrency market in 2019.

Crypto News Flash does not endorse and is not responsible for or liable for any content, accuracy, quality, advertising, products, or other materials on this page. Readers should do their own research before taking any actions related to cryptocurrencies. Crypto News Flash is not responsible, directly or indirectly, for any damage or loss caused or alleged to be caused by or in connection with the use of or reliance on any content, goods, or services mentioned.
Bitcoin Bitcoin Cash Ethereum Huobi Token Litecoin
Previous ArticleDraper: Bitcoin price will hit 250k USD within the next years
Next Article Update: PlusToken Scam moves 789,585 Ethereum to unknown address