James Wallis and Analyst of Corporate Banking of Ripple, Alenka Grealish, spoke with numerous members of the blockchain industry and presented their findings in Ripple’s second annual Payments Report. The report examines the extent to which payment service providers already use blockchain technology and digital assets, or plan to use them in the future.

The latest results show that blockchain-based payments are widespread among financial service providers. Grealish argues that the first obstacle is to integrate the technology into their own business processes and then convince users of its advantages over traditional transaction services:

The toughest point of any new technology is going from the early adopters to the early majority. This year, we saw that 35% of respondents are in production. We’ve crossed the chasm of adoption.

Wallis describes the fact that the blockchain is not a marginal phenomenon in the technology industry, which may eventually disappear from the scene again, but is already used by countless companies in a wide variety of industries:

Blockchain is becoming a reality, that is the key message. This spike in adoption is really a proof point that the value and the feasibility of leveraging blockchain in payments has been proven.

The adaptation and trust in the blockchain is already present worldwide. According to Grealish, the next milestone to be reached is to further develop the scalability, since especially in the financial sector many transactions or orders have to be processed within a short time:

Scalability and ultimately increased adoption speed is contingent upon factors including simplified implementation and regulatory clarity.

Wallis and Grealish agree that trust is the basis for all further developments in this area. The blockchain offers new opportunities, especially in the area of security and identity, which, according to Wallis, will revolutionize the future technology industry. The report also shows that the blockchain has already arrived in various industries, as the chart below shows. 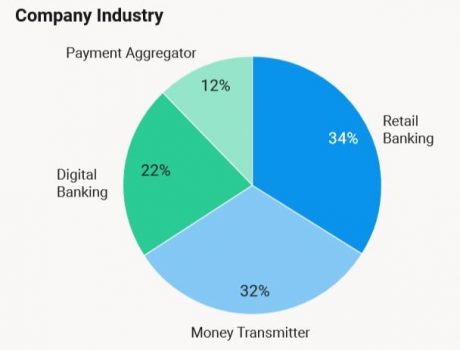 In addition, demand for the blockchain in the area of remittance services has risen sharply compared to the previous year. 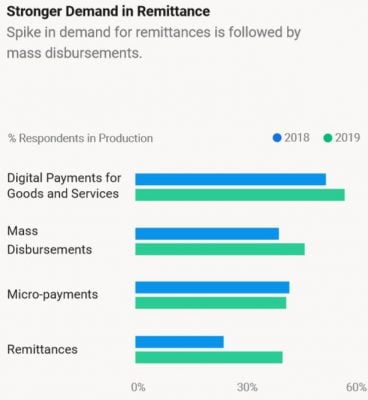 The companies surveyed stated that they consider the blockchain to be very reliable, fast and transparent. Market access and significantly lower costs, in direct comparison to traditional technologies, were also important. 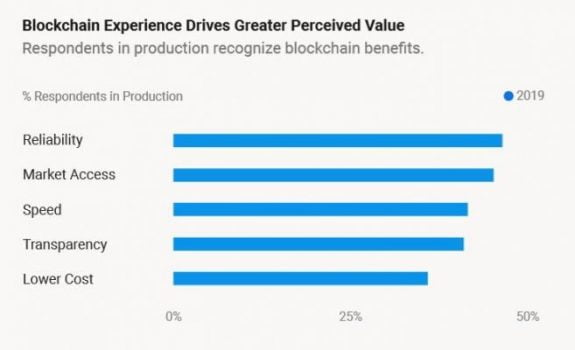 However, the report also takes up the still hotly debated issue of regulation and the unclear global legal framework. Digital banks and the next players in the blockchain application are much less concerned than traditional providers and late adopters. 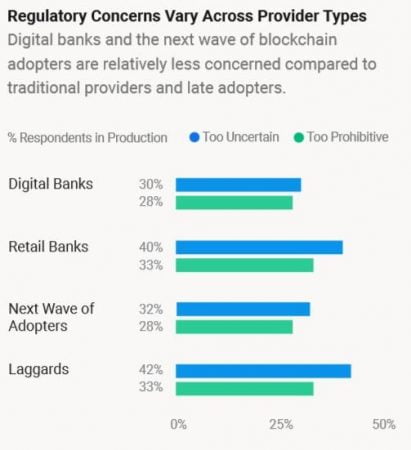 Among the companies that have already implemented the blockchain, the main reason for using the new technology is the higher speed. The ability to process transactions almost in real time is an absolute gamechanger in the industry, the report says.

Blockchain brings banks to all parts of the world

Tech billionaire Bill Gates is convinced of the potential of digital currencies and states that by using them even the poorest will gain access to and benefit from financial services (freely translated):

We’re on the cusp of another breakthrough innovation, including the poorest, in a financial system that increases instead of limiting the value of their assets. Transforming the underlined economics and financial services through digital currency will help those who live in poverty directly.

Ripple is also particularly involved in the regulation of cryptocurrencies and has set up a subsidiary in Washington D.C. specifically for this purpose, which is intended to establish communication between political decision-makers and industry. Ripple has also joined a regulatory initiative that works with governments around the world to better understand these new technologies. With this initiative, Ripple aims to promote the progress of local authorities as well as larger financial regulators.