Many large companies engage in lobbying to represent and promote their interests in politics, society and other areas. The company behind the XRP token, Ripple Labs, has also been lobbying in recent years. However, according to a recent report, its efforts have been greatly reduced.

The website opensecrets.org is a non-profit research group based in Washington D.C. and has been tracking the movement of funds in the lobbying field for several years. Recently published figures show that Ripple spent a total of $450,000 on lobbying in 2018. In 2019, the figure was only $170,000, so Ripple has significantly reduced its efforts.

Ripple spent $100,000 in the first quarter of 2019, $20,000 in the second quarter and $50,000 in the third quarter on lobbying. Data for the fourth quarter is still pending. However, it can be assumed that these have fallen further. The following chart provides an overview from 2015 to the present. 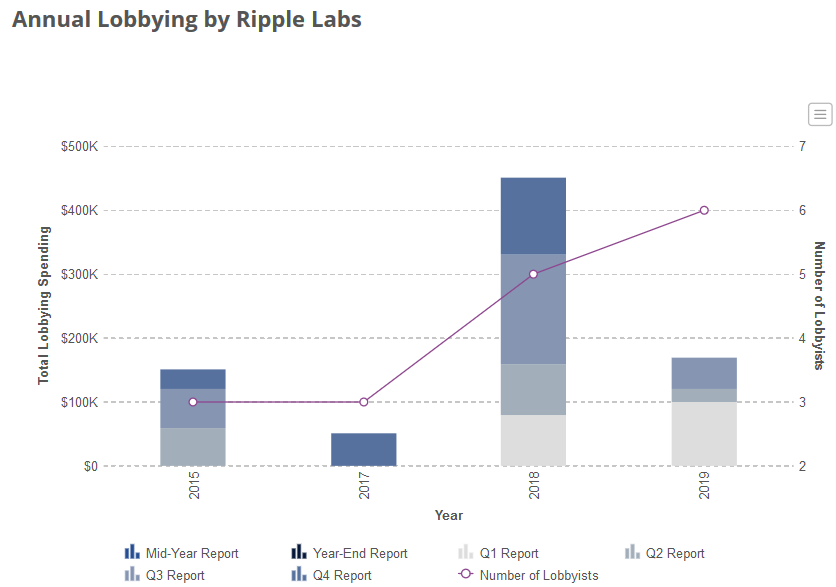 Last year there were 6 lobbyists in total, none of whom were members of the Congress. Among them were Ripple officials Ryan Zagone and Ron Hammond. The figures and information on the website opensecrets.org are taken from data provided by the Center for Responsive Politics and are based on data from the Senate Administration.

Opensecrets.org was founded in 1996 by former US Senators Frank Church (D-Idaho) and Hugh Scott from Pennsylvania. The project aims to promote worldwide transparency in various areas and thus make otherwise hidden information easily and clearly accessible to the public.

Payment giant MoneyGram is one of the first testers of the ODL technology and is delighted with the results. MoneyGram CEO, Alexander Holmes, recently described in an interview (freely translated)

What I love about ODL is that we’re completely at the forefront of this technology … We’re able to settle billions of dollars in seconds. The magic really comes from pairing MoneyGram transactions with Ripple’s ODL.

However, not all ODL testers are equally convinced by the product. The payment giant Western Union has also tested Ripple’s payment technology and is not satisfied with the results. The in-house transfer system is currently still 5 times cheaper than if the company uses XRP.

Ripple XRP
Previous ArticleBitcoin inventor to deliver keys to $9.2 billion next week
Next Article CME Bitcoin Options beat the volume of Bakkt on the first day