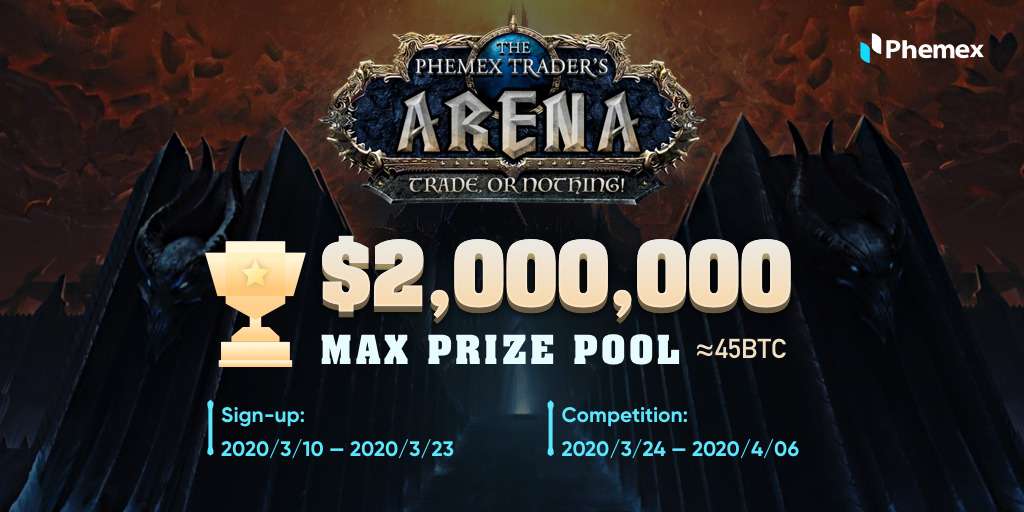 Following the astounding success of Trader’s Arena in 2020, Phemex has returned to play, with up to a $2 million pool prize.

However, just the strongest and most talented leaders prepared to join an epic journey are allowed to this crypto trading competition.

The rivalry is intense, but the trophy is worthy. So prepare for the challenge!

How to win the game?

To conquer the Arena, you need to overcome three extensive tests:

Starting with March 10th, for 14 days, all the players are on trial, which is the hardest one to pass. You must find the most formidable traders worldwide and get them to join your crew. Or you could just showcase your powers to the fiercest boss and get a place on his team.

The real battle starts on March 24th, and it will last until April 6th. To pass this test, you need to use all your trading powers while motivating your crew to give all it got.

To conquer the Arena, you and your squad need to climb on the leaderboard and get to one of the highest 10 spots by April 7th.

If you finished the game, then you will get your prize at the April 13th award ceremony.

So what do you get?

Based on the number of attendees, the prize pool of this BTC trading contest varies between $10,000 to $2 million.

To get the maximum award, the Arena expects just 18,000 warriors. Therefore, the bigger your army, the greater the trophy.

The rewards are classified into two categories, 78% of the total prize being distributed to teams and 22% of it to individual players.

How do you qualify?

Simple. At the time of the registration, you and your team members need to have at least a 0.005 BTC trading account value individually.

Besides this, without at least nine mates ready to fight by your side, you can’t qualify. If your squad is too small, then the members are separated and selected to other teams arbitrarily.

And don’t even consider cheating. No flip transactions, batch accounts, or trading APIs. Unless you want to be disqualified.

Who runs all of this?

Phemex – which was created in 2019 by skilled traders and major investors on Wall Street.

The development team ensured that they met all the wants and desires of crypto traders worldwide. The platform has a multilingual client service, a cold wallet with multi-level authorizations, up to x100 leverage, and zero-fee spot trading.

Now that you know who is behind this arena don’t miss the opportunity to go for your valuable Bitcoin!