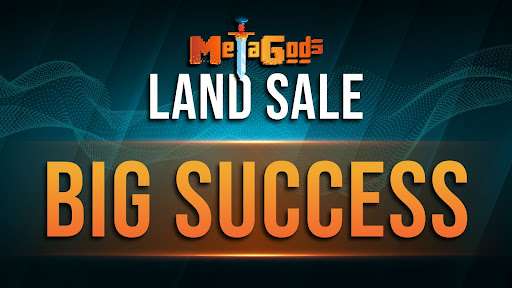 MetaGods, the 8-bit action RPG game built on blockchain, is continuing its highly successful private and public LAND sales. The MetaGods LAND has so far been purchased by numerous crypto-natives such as gaming guilds, launchpads such as GameFi, special partners like AlturaNFT, and philanthropist and internet celebrity Mr. Beast, to name a few.

With 85% of the LANDs sold during the ongoing private and public sales so far, even before the game has been released to the public, MetaGods is nothing short of incredible. It goes to show the power of community building and the forging of partnerships with guilds, projects and KOLs early on in the project. The MetaGods Discord community has grown to a whopping 72K members, clearly demonstrating the popularity of the upcoming game and the eagerness of gamers to start playing and earning.

The most significant development in this land sale has been the interest of TradFi investors from mainstream markets, signifying a strong growing support and belief in the MetaGods metaverse economy outside the crypto industry. Since the public sale began, plots of LAND have also been purchased by the broader retail gamer and investor crowd.

The new investors have acquired LAND in MetaGods with the intent of holding it for more than 3 years. Having investors from traditional markets owning a LAND in MetaGods really shows the increasing maturity of the industry, and is a great sign for the longevity of MetaGods.

It’s clear that there is a ton of trust in MetaGods by many stakeholders, investors, and the community. With the help of the recent LAND sale, the project has accumulated more than enough capital to ensure a steady development of the game, and has announced plenty of campaigns, giveaways and competitions to give back to the community.

The Value of LANDs

Although land purchase might on the surface seem as a somewhat uneventful thing, in reality it’s one of the most important investments one can make in the MetaGods metaverse. An owner of the LAND effectively owns part of MetaGods, allowing the game to be 100% owned by the community and the players.

The LANDs can be used for accruing resources, constructing buildings for economic and military upgrades, upgrading NFT power and efficiency, as well offer unique opportunities for gaming guilds to build their own sub-communities and economies on these LANDs.

Loot dropped by a perished player in a battle dungeon goes to the owner of the LAND, and the dungeon owners can adjust various parameters of the dungeon and the dungeon boss to incentivize players to go on missions in their dungeons.

For those interested in owning a part of MetaGods and a piece of valuable property in the metaverse, the remaining 15% of MetaGods LANDs can still be purchased by anyone. Each day 10 plots can be acquired for 4000 $MGOD each, or for 5 $BNB. To know more about the land sale itself, see here.

Crypto News Flash does not endorse and is not responsible for or liable for any content, accuracy, quality, advertising, products, or other materials on this page. Readers should do their own research before taking any actions related to cryptocurrencies. Crypto News Flash is not responsible, directly or indirectly, for any damage or loss caused or alleged to be caused by or in connection with the use of or reliance on any content, goods, or services mentioned.
MetaVerse
Previous ArticleIntel introduces its Bitcoin mining chip focused on sustainable energy consumption
Next Article U.K. prepares roadmap to become global crypto hub, will mints its NFT this summer