But in order for people to be able to pay with cryptocurrencies, businesses and companies need to accept Bitcoin, Ethereum and other cryptocurrencies as means of payment. For this purpose, offline businesses require software or a POS system that can be integrated into the existing legal and entrepreneurial framework and can be easily integrated into restaurants, cafés and shops.

This is where Pundi X comes in. Although it initially started with a mobile wallet app similar to TenX, Pundi X’s main focus is now on point-of-sale hardware that can be used by restaurants, cafes and shops to enable local payment with cryptocurrencies.

The software solution, called XPOS, is based on a small device with an RFID chip and can read QR codes that customers can use to pay with their Wallet app. XPOS can also print receipts. The complete range of functions is shown in detail in the following video.

By February 2021, at least 100,000 units of XPOS devices will be installed around the world. The focus is on the Asian market, in particular South Korea, Thailand, Singapore, Malaysia and Japan, but there are also the first businesses using XPOS on the American, South American and European markets.

As the video also shows, Pundi X also produces a chip card the size of a credit card, the so-called XPASS. The XPASS card works with the mobile app and the wallet and enables payments and deposits by card drawn from the mobile wallet. For this there are two cards which are delivered together. The one XPASS card contains private key information for deposits and withdrawals. The other XPASS card is intended exclusively for everyday payment transactions in shops and other acceptance points.

In addition to XPOS and XPASS, Pundi X offers a third product, XPhone. It was the world’s first blockchain-based mobile phone. It is based on Android 9.0 and exists together with the regular Android mobile radio system. Unlike traditional phones that require a central mobile operator, XPhone runs independently without the need to do so. 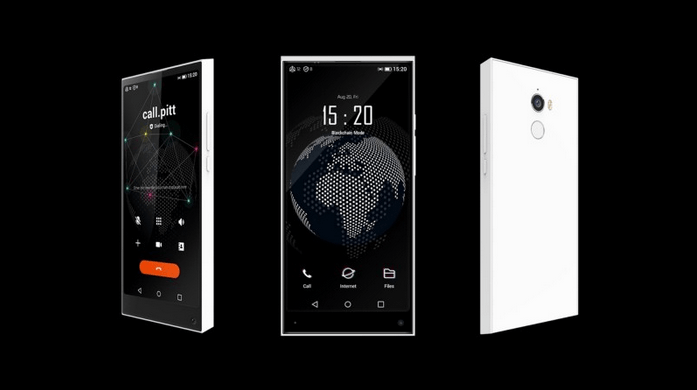 We have developed our own blockchain, which we believe will solve many of the challenges facing the many blockchain platforms today by increasing its scalability, providing the ability to publish DApps and achieving true decentralization. It will also revolutionize the way we transmit data of all kinds: it will create a truly decentralized Internet.

The Pundi X token is called NPXS and can be used as a “gas” (similar to Ethereum) to pay transaction fees with other crypto currencies and identify customers for qualified discounts. The main purpose of the NPXS token was to finance the Initial Coin Offering. The ICO took place in January 2018 and was sold out within 90 minutes. According to the company, the hard cap of 280,000 ETH was needed to finance the rollout of “100,000 to 700,000 devices worldwide”. In the Pundi X ecosystem, however, the NPXS token plays a subordinate role due to its low functions.

The maximum supply of NPXS tokens based on the Ethereum blockchain (ERC20 token) is limited, with the total offering reached in January 2021. The exact number has not yet been determined, however, but can only be estimated.

Since its launch in February 2018, NPXS has been listed on more than 20 crypto currency exchanges, including Binance, Bittrex, Upbit, Bit-Z, Indodax and Allbit.

You can follow the current Pundi X price on our NPXS price overview.

While both projects have the same goal of distributing more Bitcoins to people, Pundi X is different in several ways. Pundi X says the POS system will be much better than Bitcoin ATMs thanks to the wider range of services available and lower costs. In addition, the devices are much smaller, so they can be installed in many places where a Bitcoin machine is not possible. The following figure shows the main advantages of Pundi X compared to Bitcoin ATMs: 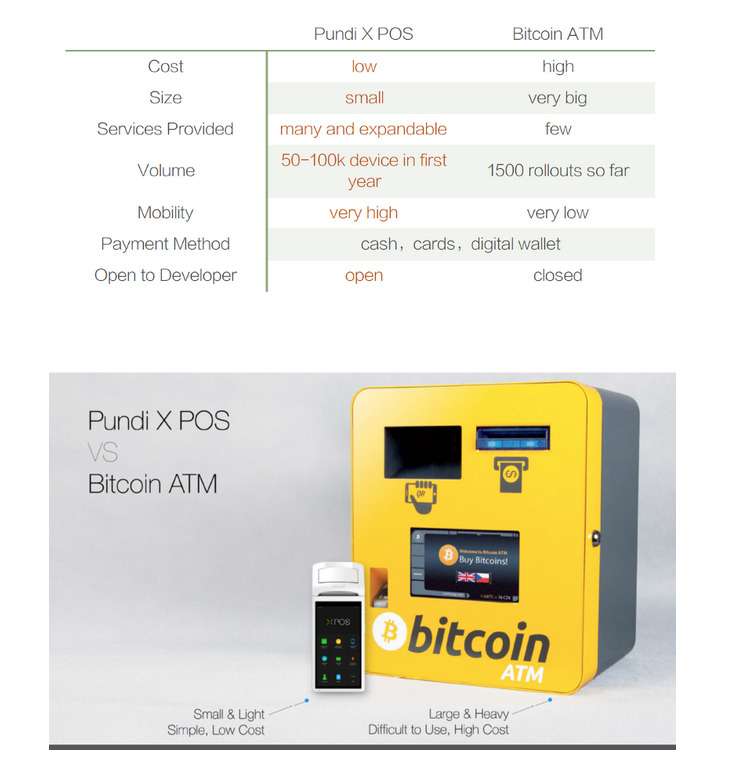 The most important partnership for Pundi X was with NEM. While the ICO took place at the Ethereum Blockchain and it turned out (in January 2018) that the big run on NPXS tokens led to an overload of the Ethereum network, similar to Crypto-Kitties, transactions for the XPOS system can also be carried out on the NEM blockchain. The fast and cost-effective transactions on the NEM blockchain should enable Pundi X to assert itself in the mainstream.

As Pundi X has announced on the official website, Pundi X will

will make its payment ecosystem – XPOS, XWallet and XPASS – available to even more consumers and businesses around the world in 2019. We have deployed our blockchain-based point-of-sale (POS) solution and partnered with governments, payment service providers and retailers. Together we will achieve rapid growth.

The XPOS devices are already in use in 25 markets worldwide and are expected to expand into even more countries in 2019. Pundi X intends to make the transaction with cryptocurrency “as easy as buying bottled water”.

Is it worth investing in Pundi X?

The acceptance and adaptation of cryptocurrencies outside the investment are a big problem within the crypto industry. Pundi X could be a catalyst for this, striving for the largest decentralized point-of-sale network by providing easy access via the Pundi X POS devices and a simple, mobile wallet.

The big challenge for Pundi X will be to convince shops, restaurants, etc. that adopting cryptocurrencies is something that will help increase sales. The marketing of the technology will therefore be a central challenge in the coming years. This step will it probably be decisive how successful Pundi X will be.

Otherwise the success of Pundi X may also depend very much on the development of the cryptocurrency market as a whole, especially Bitcoin as the lead currency and the adaption of BTC.