The digital asset XRP has had its best week of the year with earnings of 113.47% and a price of $0.60, at the time of publication. A few hours ago XRP was trading close to $1 for the first time since 2018. Investors on the crypto exchange Coinbase appear to have driven the price of the digital asset. However, users began to report a failure in Coinbase’s platform and then a crash in the price of XRP to its current levels.

According to data in the Downdetector monitor, the platform has “possible problems” with a percentage of 64% of users reporting problems accessing the website, 28% with login, and 6% with transfer out. A report published on Downdetector points out:

A lot of users are saying their money is missing. When doing some more digging, it appears the orders on CB are stuck.

As can be seen in the graph below, the problems with the platform in the last 24 hours started around midnight on November 24th. At that time, reported problems increased significantly to 900. The most affected regions are the United States and several parts of Europe.

The number of problems reported has been declining since then, but there are still issues accessing the exchange. This directly contradicts Coinbase. In one status the platform indicates it is operating at 100%, but as shown in the image below, the top buyers of XRP on the platform have dropped within 15 minutes. 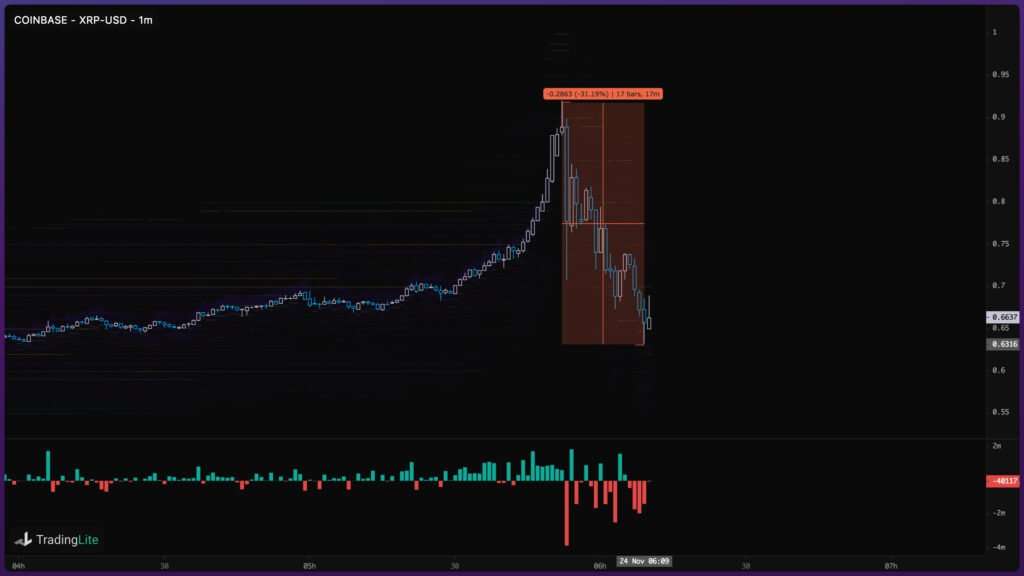 As reported by CNF, XRP seems to be breaking a months-long bearish trend. Among the reasons behind the rally is the confirmation of the partnership between Bank of America and Ripple. The banking institution is now part of the customer base associated with RippleNet and could start using Ripple’s XRP-based products, such as On-Demand Liquidity.

In addition, a report by the Forum of Official Monetary and Financial Institutions (OMFIF) has indicated that XRP could be a faster, more secure, and transparent solution than the SWIFT network. Trader Credible Crypto has set a target price for XRP of $25 to $30, but in the short term, $0.67 is showing strong resistance. Sharing the image below, one trader advised caution to investors.

Despite the failure of Coinbase and the rapid crash in price, sentiment in the XRP community remains strong as the digital asset leads the rally in the crypto market. In a joking tone, Ripple’s CTO, David Schwartz, responded that he will retire when XRP hits $1. At the time, XRP was trading at $0,90.

@JoelKatz just announced he will retire from Ripple within the next hour ? https://t.co/bwCfObQu4p