The crypto market and the Bitcoin price remained so far relatively unimpressed by the upcoming announcements of the US Federal Reserve Bank today. Represented by its president, Jerome Powell, the FED is expected to make a major announcement regarding its monetary policy to mitigate the effects of the coronavirus pandemic.

Speculation about a possible announcement of inflation has raised particular expectations. The FED could continue to keep interest rates low, but allow inflation to rise to over 2% per year. As a result, the US dollar could further lose in value, pushing investors even more towards gold and Bitcoin as a safe haven.

The Head of Fixed Income at Brown Advisory, Tom Graff, said in an interview for CNBC that Powell’s speech will be “historic”. However, he stressed that central banking institutions have lost credibility by demonstrating their inability to resolve the current economic situation:

Central bank credibility is crucial. Currently, they don’t have any credibility that they can or are willing to allow inflation to be higher than 2%, and that’s a problem. Actions are going to speak louder than words. The market’s going to have to see them not hike interest rates even as unemployment gets much lower before they’ll believe it.

Within the crypto community, Powell’s speech has been interpreted as a catalyst for the price of Bitcoin. Gemini co-founder Tyler Winklevoss said that Powell has been one of the main drivers of the rally that Bitcoin has seen in recent months. Also, Abra CEO, Bill Barhydt, shared a similar view and welcomed the “new fuel” the institution will give to Bitcoin price.

However, data of the analysis firm Skew shows that the cryptocurrency has not reacted as on previous occasions to possible announcements by the FED. As shown in the chart below, the implied volatility of Bitcoin for options fell to 52%, its lowest level in the last 30 days. 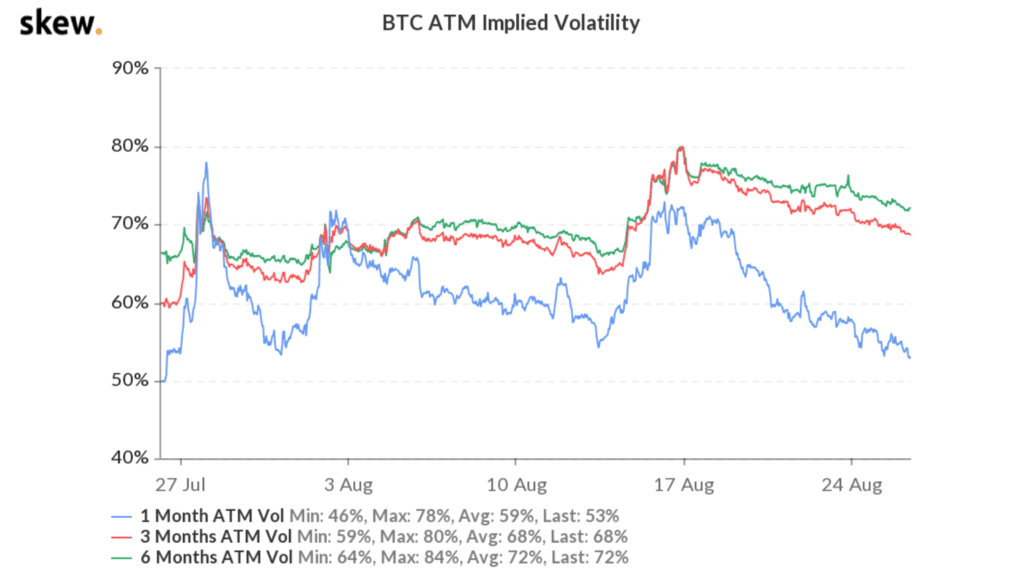 Skew’s data shows that investors could be waiting for the speech to act accordingly. This could benefit or disadvantage Bitcoin price. For now, the data is not showing a trend in either direction, however, the lack of movement could also indicate the loss of strength of the bulls.

Despite that, the recent announcements and actions by major companies such as MicroStrategy proof that Bitcoin is as an asset to hedge against possible dollar inflation. In that sense, founder of the analysis firm Quamtum Economis, Mati Greenspan, wrote the following for Coindesk:

U.S. authorities have just taken on an inordinate amount of debt, more than they could possibly ever hope to pay back. So the only viable option is to decrease the value of that debt by way of monetary debasement. It’s despicable and dangerous, but the only other option is austerity, which is too unpopular for any public servant to mention at this time.