Bitcoin’s performance in June has been relatively stable compared to the first months of the year. In the first quarter, BTC touched its yearly bottom briefly below $4,000. In contrast, during June it has remained in the $9,000 range. However, since last week BTC has experienced increased volatility.

This is due to the market’s expectation over the expiration of $1 billion in Bitcoin options contracts. The cryptocurrency was expected to go up or down depending on the swings in the options. In that sense, on June 21 BTC fell around $600 and followed that trend until it briefly fell below the range it had maintained for the last 4 weeks, $9,000.

At the time of publication, Bitcoin trades at $9,158 with gains of 0.47% in the last 24 hours. On the weekly chart, BTC is down 5.59% and on the monthly chart 5.43%. BTC has managed to stabilize at the referred price after the global stock market reacted to a possible announcement of a new stimulus package.

As reported by CNF, Bitcoin and the crypto market are correlated with the traditional market, especially with the S&P 500 index. The rise in Bitcoin’s price back to $9,000 coincided with a 2.3% rise in Nasdaq and a 1.2% rise in the Dow Jones. The S&P 500 is up 1.47% and is close to a new all-time high. Analyst Holger Zschaepitz stated the following:

Therefore, it can be assumed that the announcement and subsequent deployment of a stimulus package to mitigate the effect of the Covid-19 pandemic is bullish for BTC price performance. As it is correlated with the traditional market, they share a positive outlook. A Bloomberg report states that the S&P 500 is projected to gain 9% over the next 12 months. Bitcoin, on the other hand, seems to be moving towards $10,500, as one trader stated:

Data from the analysis firm Glassnode seems to support a bullish outlook. According to the firm, 61% of the total Bitcoin supply has not moved in a year. The last time this happened was in 2016, according to Glassnode, when the market entered an upward cycle that pushed the BTC price to an all-time high of $20,000. 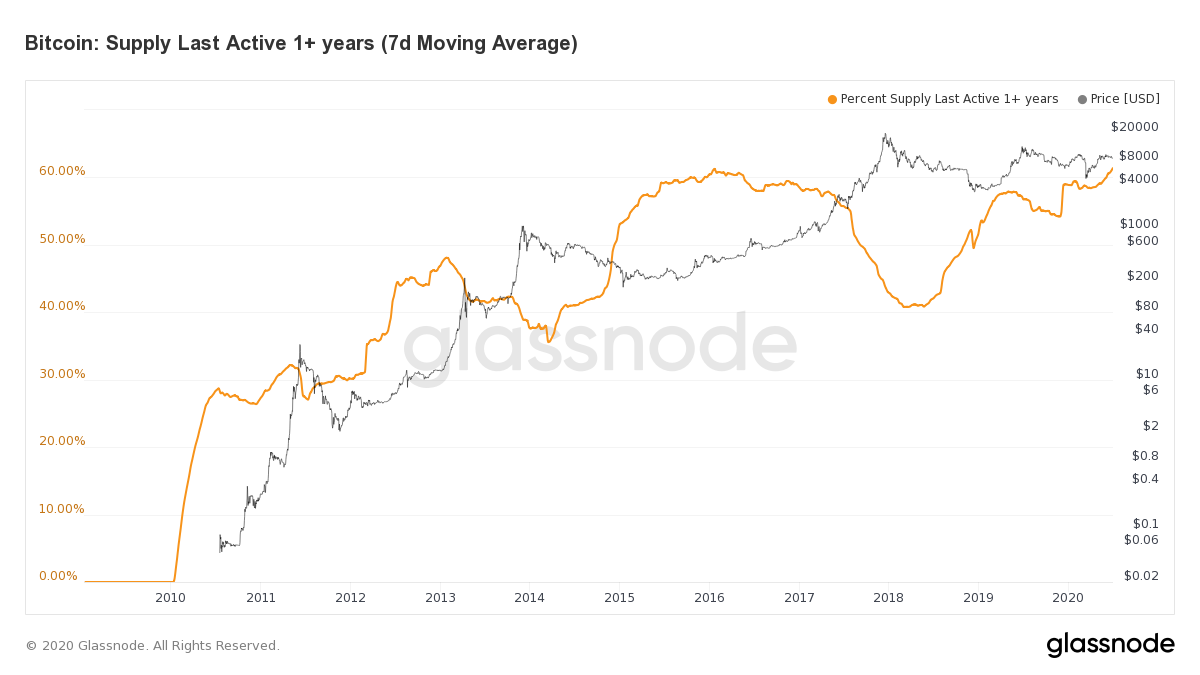