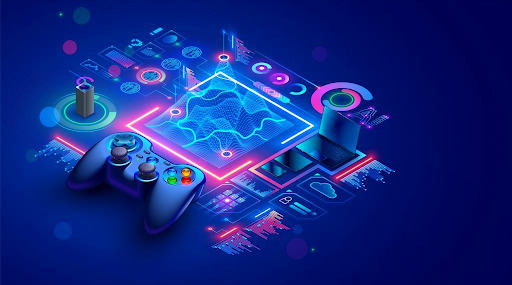 As human beings, we are naturally resistant to change given the uncertainty in altering one’s norms. However, there comes a time when there is no option but to ride along, like in the case of technological advancements. Back in the 90s, most people did not believe in the potential of the internet, let alone the possibility of existing in a digitally connected globe. Today, the internet penetration stands at 63%, over 5 billion people have access to the World Wide Web (WWW).

So, how long does it take for technologies to go mainstream? The simple answer is it depends on several factors. In the case of the internet, it’s been roughly four decades since the TCP/IP protocol was standardized to enable the growth of worldwide interconnected networks. While the 80s marked a major milestone in the proliferation of the internet, adoption rates have only spiked in recent years following the debut of portable computers and smartphones.

That brings us to our main area of focus; the gaming industry, one of the biggest beneficiaries of technological innovations. Dating back to the 1950s, games have gradually become a significant part of everyday life for most people. According to the latest statistics, there were over 2.69 billion gamers in 2020; this figure is expected to hit 3.07 billion in 2023, given that the covid pandemic attracted a larger market to the gaming sector.

The attitude towards gaming has changed a lot as adults who played arcade games in the 70s and 80s embrace modern-day gaming ecosystems. It is no longer a children’s only affair, over 65% of adults in today’s world play games on a regular basis. More importantly, the nature of gaming innovations has leveled up, thanks to the advent of technologies such as Virtual Reality (VR), 3D graphics and Artificial Intelligence (AI).

Unlike in the earlier years where arcade games were based on a ‘pay-to-play’ model, the paradigm has shifted to consoles such as Microsoft’s Xbox and Sony’s Playstation. In this new era, gamers have the option to purchase a game in disc form or online. Above all, the internet has made it possible for gamers across the world to engage in massively multiplayer online (MMO) competitions, featuring prominent games like Fortnite and Call of Duty.

But it was Apple’s launch of an App Store that took the gaming industry to a whole new level. According to analysis by Statista, the mobile gaming market eclipsed $77 billion dollars in 2020 while PC gaming lagged at $37 billion dollars. The huge difference in these revenues can be attributed to the flexibility of mobile-oriented games; developers can design their own games, with minimal market share limitations.

Well, it keeps getting interesting, the latest trends show that we are likely heading to the era of web 3.0 (decentralized) gaming ecosystems.

As mentioned in the introduction, games have been evolving at an almost similar pace to the internet. We are now in the third iteration, otherwise known as Web 3.0; this new version of the web has introduced an opportunity to create community-driven applications. For example, in the gaming market, Web 3.0 is setting the stage for innovators to reduce their reliance on established companies like Ubisoft and Activision Blizzard.

How exactly is this possible? Contrary to the centralized nature of existing games, Web 3.0 is based on an incentivized economy. Gamers in the ecosystem are rewarded for playing, which takes the experience a notch higher; play-to-earn. The goal is to enable gamers to earn a passive income while doing what they enjoy most. In doing so, Web 3.0 gaming ecosystems are also building stronger communities.

Despite being a nascent ecosystem, play-to-earn games like Axie Infinity have recorded billions in sales, with players from developing countries such as The Philippines making a livelihood out of the incentives. On the other hand, metaverse games such as Fashion League are enhancing the gaming experience by allowing players to interact in a digital world, alongside an opportunity to earn virtual money.

The Fashion League gaming model stands out, given that it combines the best of fashion and gaming. Individuals who are interested in fashion can explore this Web 3.0 gaming platform and engage in several activities, which include building a personalized virtual clothing store, designing fashion NFTs and trading these products in decentralized markets. Going by these trends, it is no surprise that even the likes of Microsoft are eyeing a spot in the metaverse.

“As the virtual and physical worlds converge, the metaverse comprised of digital twins, simulated environments and mixed reality is emerging as a first-class platform.” said Microsoft’s CEO Satya Nadella during the Q3, 2021 earnings call.

The evolution of modern-day technologies will certainly be impactful in tomorrow’s industries. While gaming seems to be quite ahead of the rest, it is likely that other sectors are going to follow suit in integrating the latest technologies. More importantly, the advent of Web 3.0 is a game-changer that progressive tech stakeholders cannot afford to downplay. It will soon be the order of the day, an online economy that is run by the community and rewards contributors for their participation.