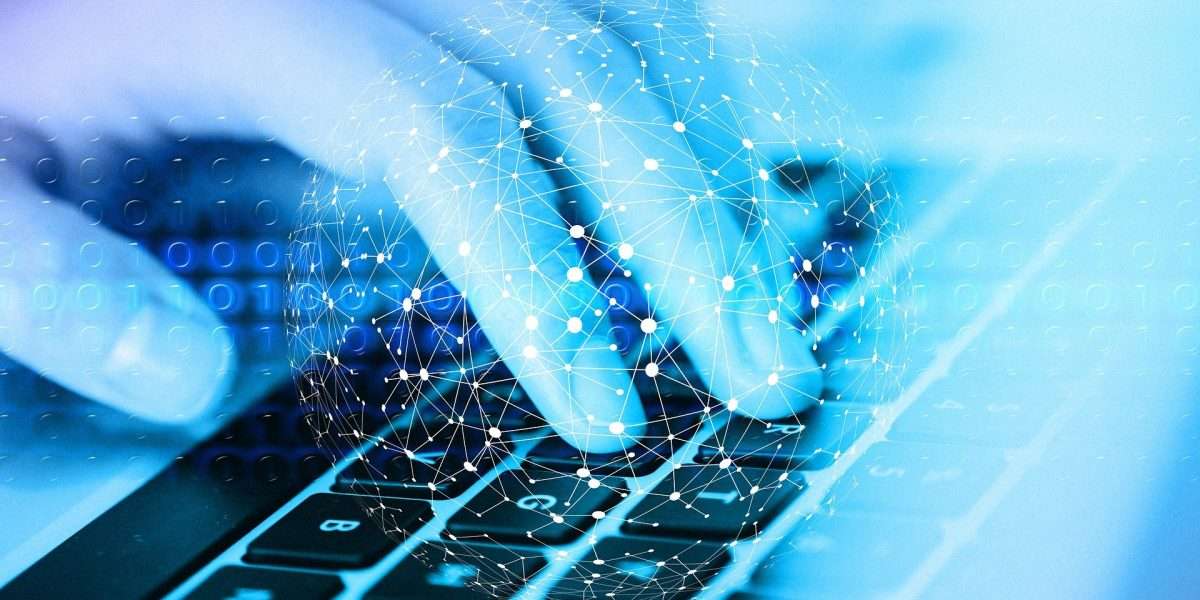 April has been a busy month for the cryptocurrency industry and despite an overall dip in crypto prices, the month saw several positive moves and developments that proved the industry is still marching ahead. A new report by DappRadar shows that blockchain activity noted a rise in April, with play-to-earn games and NFTs getting back on track as well, even as Yuga Labs’ Otherside NFTs brought out the best and worst of the crypto and Ethereum ecosystems. 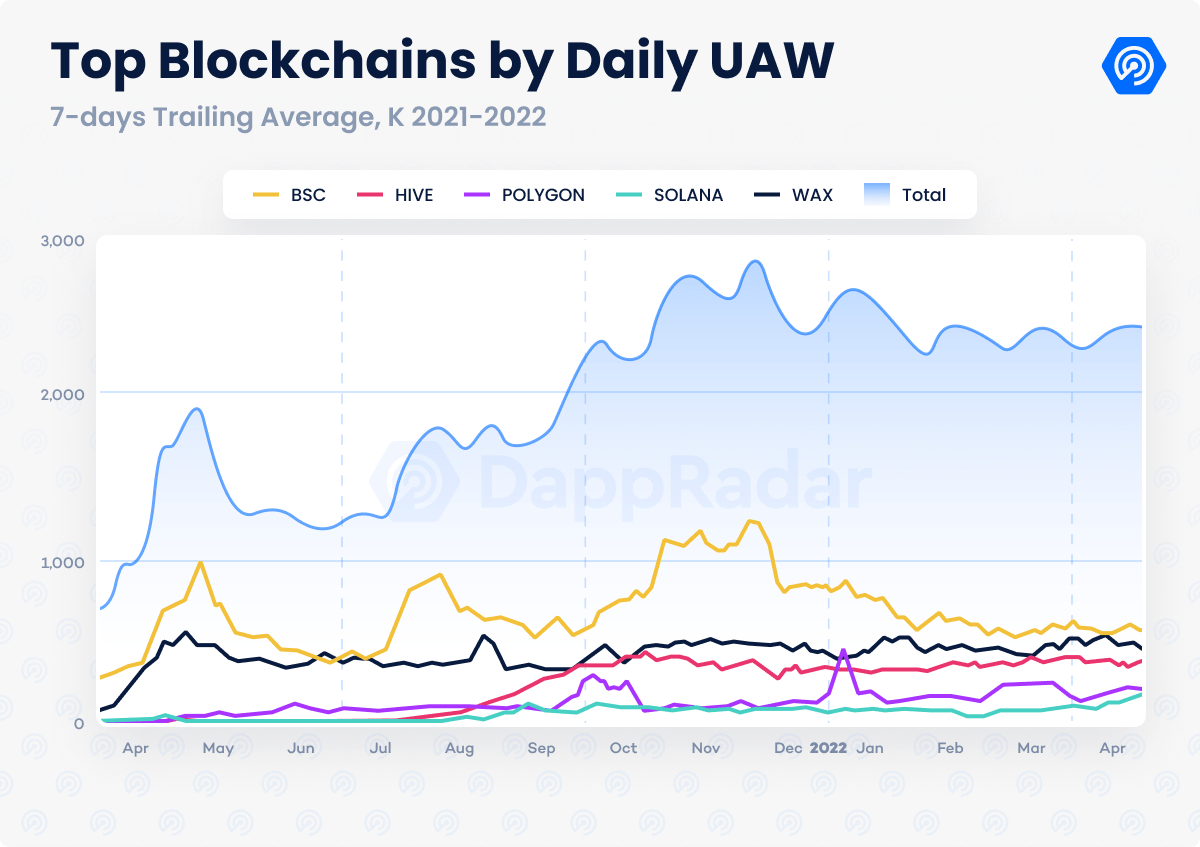 Hive and Polygon were the other major players in this category. Notably, Solana saw one of the biggest rise in inactivity, with Solana dApps seeing a 58 percent rise in the number of active users in April to surpass 100,000 for the first time ever. Orca Finance, its biggest decentralized exchange (DEX) had the highest activity.

This rise was despite Solana suffering yet another outage. On April 30, it halted operations for over 8 hours due to ‘botting on the Metaplex Candy Machine program.’ This machine is used by a majority of Solana NFT projects to launch their collections. The most worrying aspect about the outage is that it was the seventh such outage just this year.

Today #Solana mainnet-beta went down partially due to botting on the Metaplex Candy Machine program. To combat this, we have merged and will soon deploy a botting penalty to the program as part of a broader effort to stabilize the network. https://t.co/QaAZT3VxXz

The outage offered yet another opportunity for Solana critics to attack the project, and rightly so. Justin Bons, the founder of Cyber Capital, stated:

I do not support SOL, there are far too many red flags. Consistently displaying a pattern of bad behaviour. Prioritising attracting ignorant investors over good blockchain design. There are many examples of lies, fraud & bad design.

The DappRadar report further revealed that despite being said to be a passing fad, NFTs had seen yet another great month in April.

The NFT market appears to recover from a cooldown period experienced since mid-February. For just the third time in history, the monthly trading volume surpassed $6 billion ($6.3 billion), growing 23% from March.

Embattled Solana was among the biggest gainers. As CNF reported, its NFTs were integrated into OpenSea and this seems to have had a great effect. The trading volume of Solana NFTs shot up by 91 percent in April to hit $300 million, DappRadar found.

The Solana NFT bull run can be partially attributed to the network’s integration with OpenSea, as the leading NFT marketplace increases the visibility of these NFTs exponentially. It will be interesting to monitor if the integration of Solana into OpenSea affects the performance of other NFT marketplaces in the ecosystem.

OpenSea led the sales with $3.4 billion in volume while LooksRare continued its impressive run with $2.5 billion, a 9 percent rise MoM. 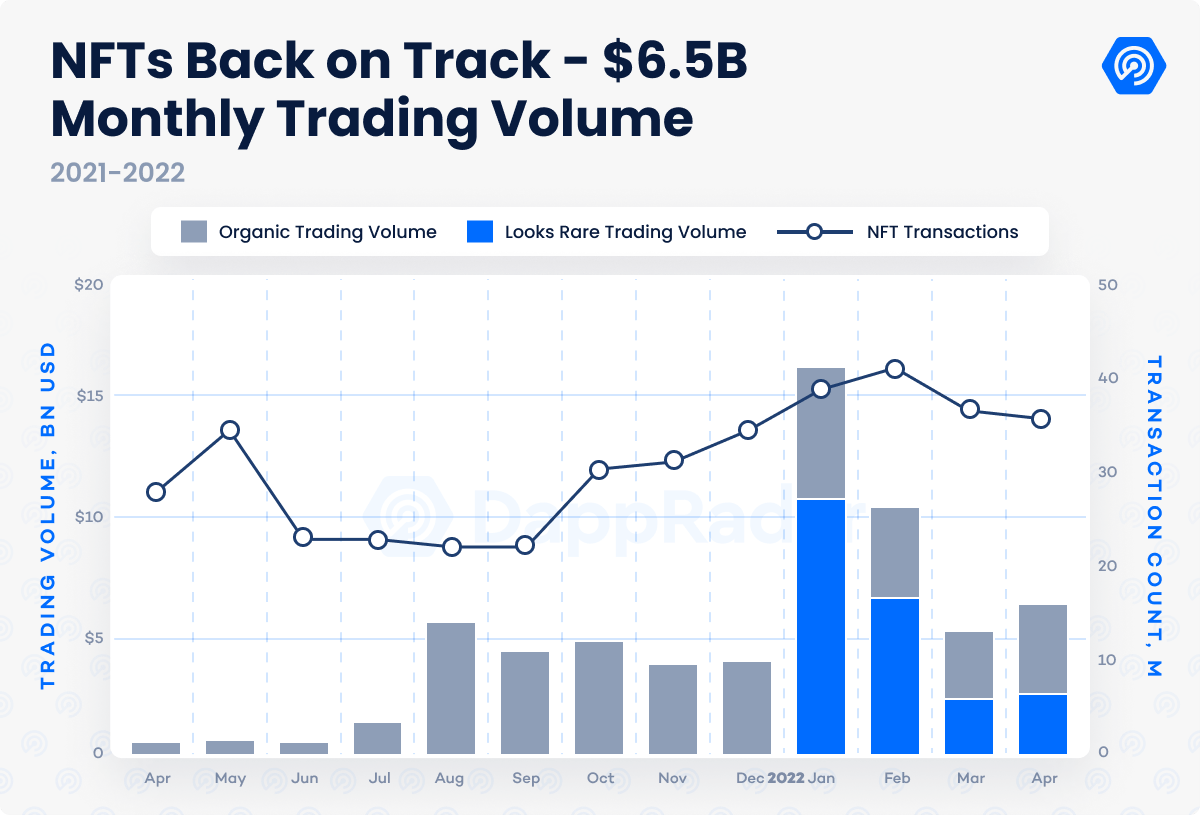 The top-tier collections continued to see the highest volume including Bored Ape Yacht Club, Azuki, VeeFriends, CryptoPunks, and more. However, new drops in April stole the show as well.

The first was Moonbirds, an NFT project that was launched by the PROOF Collective. It generated $500 million in trading volume, the highest of any collection in April. They now rank as the 11th-most traded ever, higher than established collections such as Cool Cats and Meebits.

The highest-valued sale was of a CryptoPunk which went for $3.2 million, with yet another one going for $1.57 million. Three Moonbirds and two BAYCs were also in the top 10. 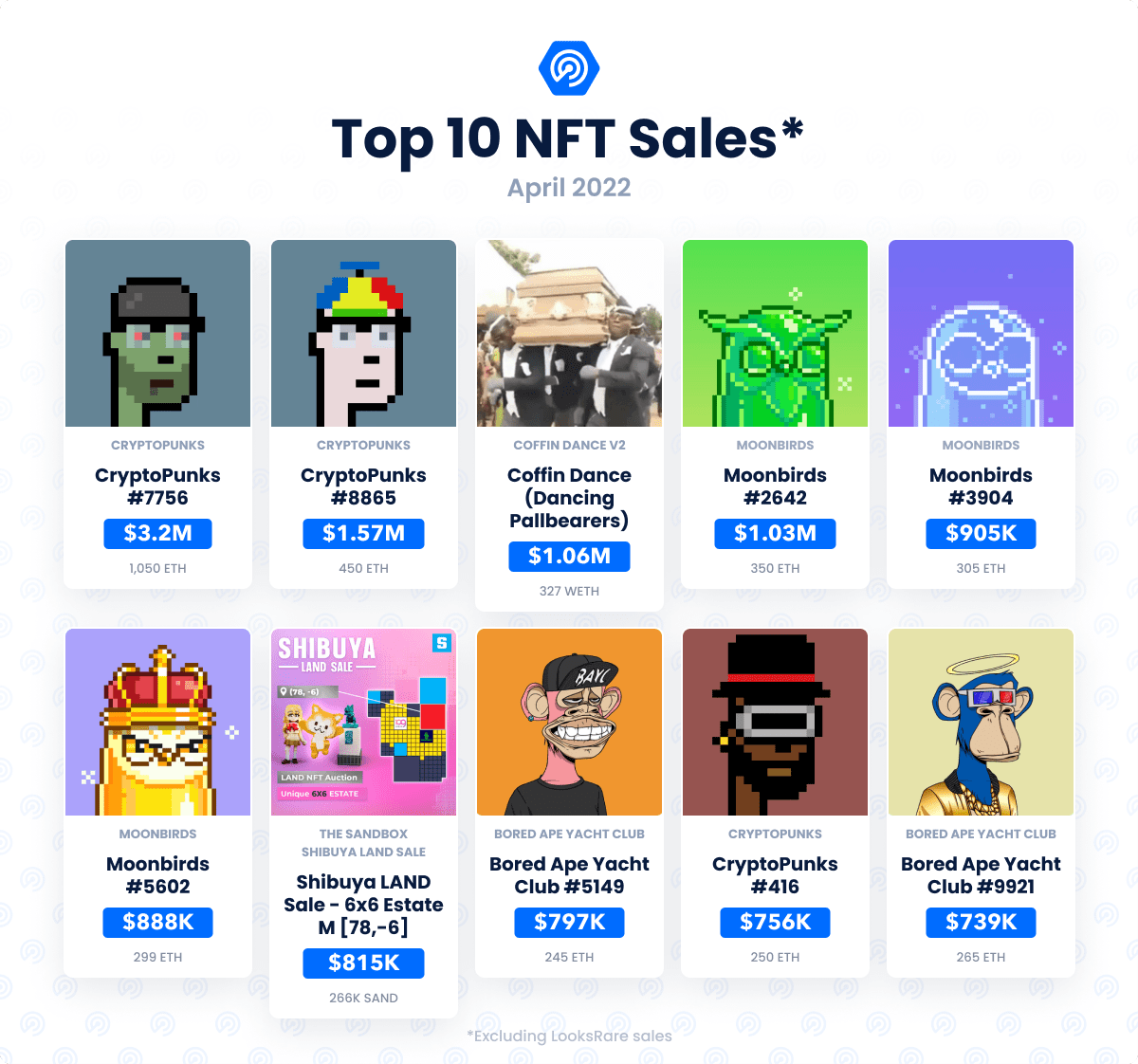 While Moonbirds saw the highest sales in April, it was another project that grabbed all the attention – Otherside by Yuga Labs, the creators of the Bored Ape Yacht Club collection. As CNF covered, the collection dropped on April 30 as one of the most eagerly-awaited NFT projects in recent times.

55,000 Otherdeeds were on sale and Yuga Labs ended up generating $340 million from their sales. Secondary sales generated $420 million on the same day for a combined $760 million in just 24 hours.

While this was a big achievement, there was a second side to the tale – that of the extremely high gas prices on Ethereum. Records show that 55,000 ETH (a record) was burnt in the process, or $150 million. Even more worryingly, there were 14,000 failed transactions from the sale which combined, led to $4.5 million lost in transaction fees.

Yuga Labs has announced that it will reimburse those who lost money, but this model of benevolence isn’t sustainable in the long term.

Other findings from the report include that DeFi total value locked (TVL) has shrunk by 12 percent although it’s still up by 47 percent from April last year. Terra has continued to rise as DeFi platform and now has $29 billion in TVL, more than twice that of third-placed BNB Chain. 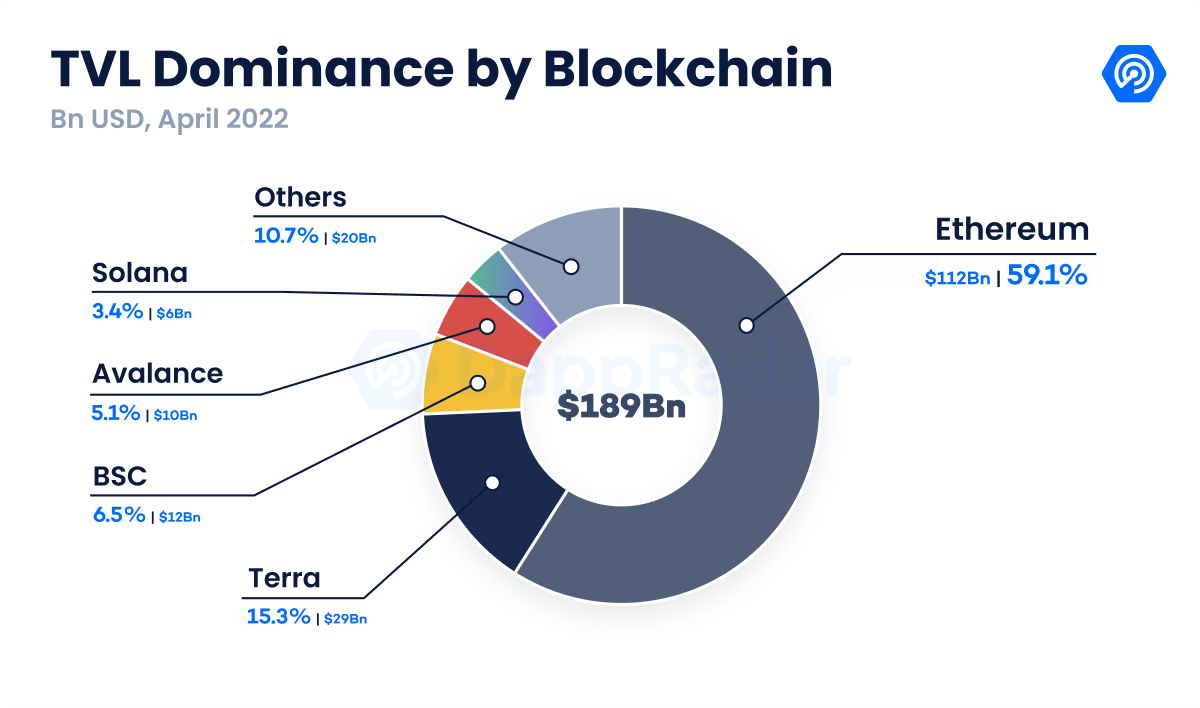